VIDEO: From Seed to Table At W&L, sustainability starts with a seed and blossoms into sea change. Take a peek inside our gardening and composting effort to see how it's impacting our community — and the future.

“In sustainability, we look at the three levels. So, the economics, the environment and the social issues, and the campus garden and our compost system hit all three of those things. We’re saving the university a little money, we are providing a very healthy food alternative for our community, and we are protecting the environment.”
~ Kim Hodge, W&L Director of Sustainability

Seeds become plants, plants bear fruit, fresh produce is consumed, scraps become compost, and that compost feeds the next generation of plants. This is the circle of life for fruits and vegetables, and it is a way of life at Washington and Lee University.

Here, the Office of Sustainability works with departments across campus every day to transform the school motto, Non Incautus Futuri (not unmindful of the future) into meaningful action. Whether that action is as small as pinching out suckers on a growing tomato plant or as large as diverting tons of waste from the landfill, it adds up to something significant for generations to come.

Washington and Lee established its recycling program in 2001, followed by the composting program in 2002 and the campus garden in 2008. All three of these programs have since grown significantly.

According to the most recent data available, the recycling program, which is managed by University Facilities, collected more than 65 tons of recyclables during fiscal year 2018. That’s up from 31.57 tons in fiscal year 2015—in other words, a lot of refuse that otherwise would have ended up in a landfill.

The W&L compost program, which is run by a compost operations assistant and aided by the student Compost Crew, is fed by daily pick-ups of food waste from all of W&L’s dining facilities. That includes compostable to-go ware as well as scraps that have been fed through a pulper in the Marketplace. Compostable material is also collected at special sorting stations during big campus events on Cannan Green. In 2017-18, the Compost Crew collected 34,603 pounds, or 17.3 tons, of compost. This program is also supported by the Biology Department and University Facilities.

The campus garden, which is maintained in partnership with the Biology Department, Campus Kitchen, Dining Services, Student Affairs and University Facilities, is the final stop in this closed-loop system. The garden produced 1,827 pounds of food in 2017 and sold $4,655 worth to Dining Services. The rest of the harvest was shared with the local food bank and the student food pantry.

Student engagement in the university’s sustainability efforts includes not only the Compost Crew, but also W&L’s Student Environmental Action League, an environmental advocacy and activist group. The Office of Sustainability also employs a number of interns each year, up from just three in 2014-15 to 15-20 per semester now. One of the university’s theme houses, Sustainability House, allows up to 16 students each year to immerse themselves in concepts that minimize the human footprint on the environment. In addition, a week-long pre-orientation program allows first-year students to learn more about all aspects of sustainability.

This student involvement extends beyond extracurricular or housing options and into classrooms at W&L. The Sustainability Office frequently partners with faculty and students, working most closely with the Environmental Studies Program, the Biology and Art departments, and the Office of Community-Based Learning to incorporate principals of environmentalism into research and coursework.

When students are touched by sustainability efforts during their time at W&L, they are more likely to continue those actions off-campus, and more likely to champion those practices with their own families and colleagues in the future, representing another closed-loop system. With positive influence from the Office of Sustainability, these ambassadors for recycling, composting, eating local and otherwise protecting the environment are not unmindful of earth’s future. 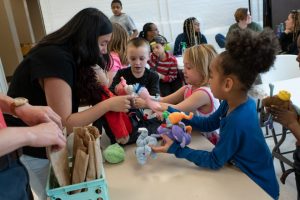