How to Cover All the Angles Jim Rikhoff ’85 has been in the broadcast studio for some of CBS’s most historic sporting events. 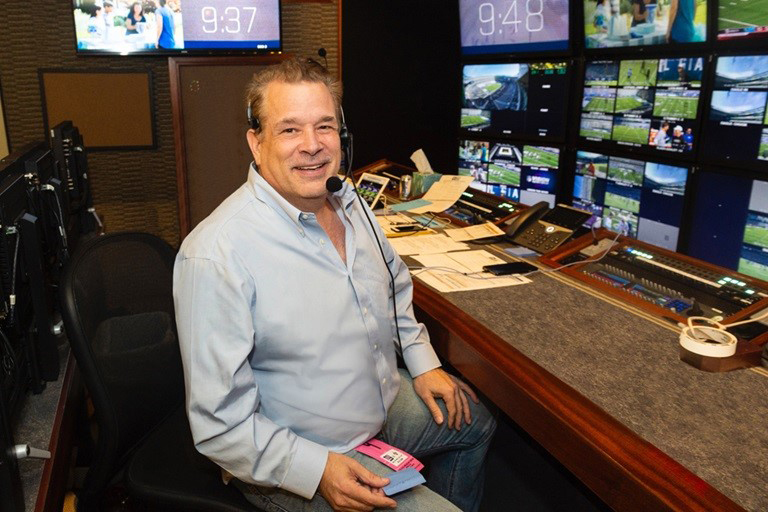 “I’ve had frustrating days, but I’ve never had a boring day.”

Jim Rikoff ’85 was the replay producer for Tiger Woods’ historic 1997 Masters victory at Augusta. It was a moment he’ll never forget.

Rikhoff, who joined CBS sports a few weeks after receiving his diploma, has covered numerous triumphant performances during his 34-year career. Along the way, he’s won nine Emmy Awards working on every major sports event at CBS — golf (including the Masters and PGA Championship), college basketball (including March Madness), NASCAR (including the Daytona 500), Major League Baseball, the U.S. Open Tennis Championships, the Winter Olympics and the National Football League.

Rikhoff started producing NFL games in 1998, the year that CBS re-acquired broadcast rights for the league. In 2017, he was promoted to lead game producer of “The NFL on CBS” and began working with veteran sportscasters Jim Nantz and Tracy Wolfson and analyst Tony Romo, the former Dallas Cowboys quarterback. Rikhoff, who made countless trips to Romo’s Dallas home to review game tapes and do mock broadcasts, was widely credited with Romo’s instant success.

“If Tony had been awful, it would have been my fault. And because he’s so good, that’s not because of me,” Rikhoff said. “I gave Tony the foundation, the tools, the mechanics. I realized this guy is special. When Tony came on, it revitalized us and challenged us.”

Those who have watched Rikhoff’s CBS career unfold are not surprised. Nantz has known Rikhoff since his earliest days at the network.

“[N]othing he has achieved surprises me,” Nantz said of Rikhoff in a Sports Illustrated story. “He’s bright, organized and committed to doing things right.”

Rikhoff produced his first Super Bowl in February 2019 from Atlanta, prompting Variety to dub him “the Super Bowl’s Most Experienced Rookie.”

“These last few years have been a pretty heady situation,” he said. “Looking back, W&L prepared me well — the people skills, the professionalism.”

Rikhoff majored in psychology but stayed an additional year to complete a second major in journalism. “The faculty were all great. Bob deMaria challenged you but made it fun. And I always use a quote from Ham Smith when I talk to our researchers about accuracy: ‘If your mother says she loves you, check it out.’”

After graduation, even though he had a job offer from a South Carolina newspaper, Rikhoff went home to Princeton, New Jersey, and knocked on the door of an acquaintance at CBS. In fact, he knocked several times, taking the bus into New York City three times before he got a meeting and an invitation to observe the CBS Sports operation. He ultimately landed an interview as a researcher.

“They asked me about baseball, which is the one sport I knew better than any other. If it had been another sport, I might not have been so lucky,” he said.

“Persistence and luck — those are the keys.”

Rikhoff started at the bottom or, as he characterized it, “Getting coffee for Brent Musberger.” The climb has been steady, requiring “a lot of humility,” plus the requisite skill set. Now that he’s at the top of his game, there’s no coasting, only new challenges.

“I’ve had frustrating days,” he said, “but I’ve never had a boring day. I’ll do it as long as I get that excitement every week when I walk into a stadium or onto a golf course.”

“The Fog Bowl.” I was a broadcast associate for the Dec. 31, 1988, National Football Conference playoff game between the Philadelphia Eagles and Chicago Bears. You could see the fog roll in from Lake Michigan and you couldn’t see two feet in front of you. It was one of the most surreal moments in NFL history.

The 2019 Masters. I was the replay producer. Tiger Woods’ victory at Augusta was dramatic and improbable. I think it will go down as one of the greatest comebacks in sports history.

Super Bowl LIII. I was the producer for my first Super Bowl on Feb. 3, 2019, in Atlanta, where the New England Patriots beat the Los Angeles Rams. This checked a big one off my bucket list.

2019 American Football Conference Championship Game. I was the producer for the Jan. 20, 2019, game in which the New England Patriots beat the Kansas City Chiefs 37-31, in overtime. This was the best game I ever worked on and was the highest-rated championship game in 42 years.

1997 Masters Tournament — Tiger Woods’ historic victory at Augusta. This was his first major championship, and he won by 12 strokes. The moment transcended sports. 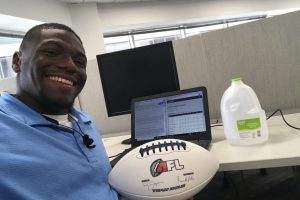