Interns at Work: Gray Rixey ’18 Gray Rixey '18 spent part of his summer interning for a member of the British Parliament as part of the London Internship Program. He had no idea it would happen during one of the most tumultuous periods in British history.

“History was being made in Parliament, and I was right there in the hub of it.” 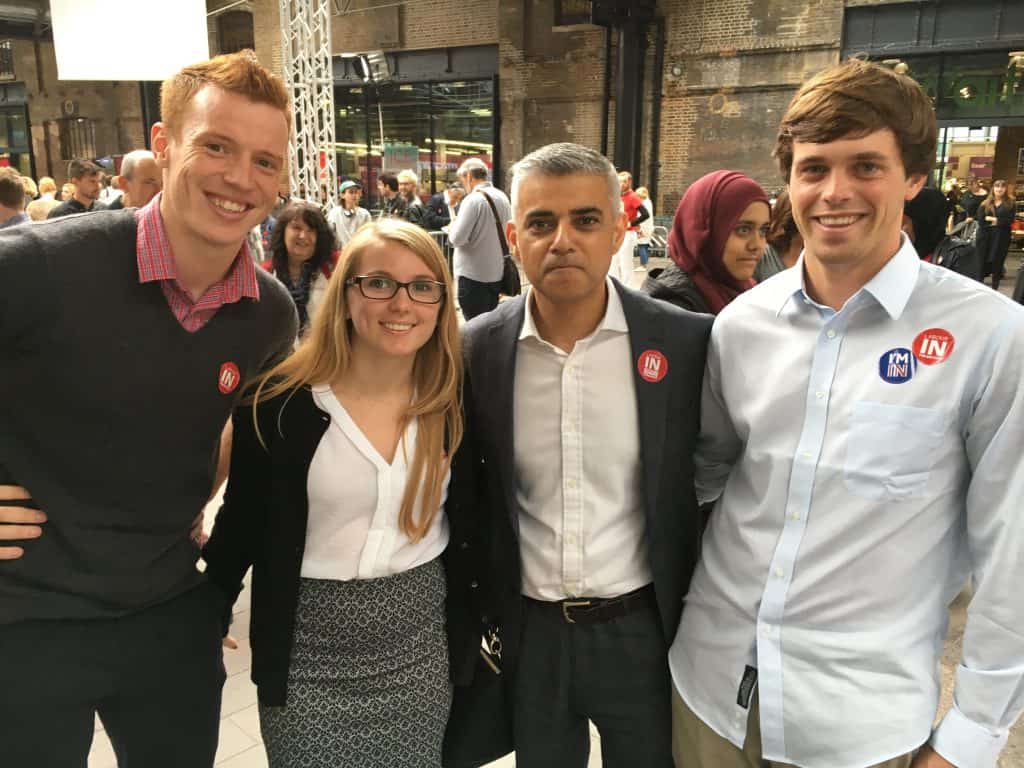 I’ve always been interested in politics, but I’ve also maintained the idea of majoring in science and going to medical school. Last summer, I shadowed surgeons in the operating room of my local hospital. To help myself make up my mind about which career path I wanted to take, I decided this summer needed to be spent in the political equivalent of an operating room. For me, that “operating room of politics” was Parliament.

I was lucky enough to land my internship through the W&L-sponsored London Internship Program. I learned about this program late one night in October from my friend Julia Gsell, who was already planning to apply and convinced me to do the same. Once accepted into the program, I wrote down “Parliament” as my number-one internship preference more on a whim than anything else. To my knowledge, nobody from W&L has ever interned in the British government. I never dreamed I would actually be selected to work in the House of Commons under a member of British Parliament.

What gave you an edge in landing this internship?

I owe my internship and summer experience entirely to Washington and Lee and its London Internship Program. The hard work and dedication Professor Oliver, Dean Jensen, Mrs. Wager, and many others made this program an exceptional opportunity. Without their help, I would never have had this summer in London, let alone my internship in the House of Commons in the British government.

I worked in Westminster Palace, and one of its auxiliary buildings on the Parliamentary estate called Portcullis House. Work was a very formal setting, where I was welcomed into the world of wearing suits. I spent a lot of time in the office, but every work day had me all over the estate. I worked Tuesday through Thursday at Parliament, up to 20 hours per week. On three of those days, I commuted to my MP’s constituency in west London, called Ealing Southall, and worked in his headquarters office. I typically arrived at work at 10:30 a.m., which seemed pretty leisurely for a nation’s government building. Every single day was completely different. I read and responded to constituency mail on current events and issues pretty regularly. I attended several award ceremonies, VIP receptions, lobbying events and debates in Parliament. I corresponded with other members of Parliament, even the prime minister, on behalf of my MP. I wrote speeches for my MP to use in debate and facilitated with the legislation he was working on. After a few weeks, British politics became so unpredictable that I started to check BBC every morning to find out what drastic political events I was about to walk into at work.

What are some specific projects you worked on?

During the duration of my internship, I compiled letters from constituents regarding a current issue on the Heathrow Airport expansion into one large database on Excel. From this database, I pulled names and addresses and sent more than 2,000 reply letters to concerned citizens. I drafted several policy letters on a range of issues for my MP, including radically motivated attacks, leaving the European Union and NHS — the British healthcare system. Before and during the EU Referendum, I campaigned with the other staff members for the U.K. to remain in the EU. This involved passing out pamphlets and stickers, knocking on doors and tallying the number of people who voted in different neighborhoods. The referendum ended with Great Britain voting to exit the EU. My ultimate project was writing a 10-minute speech for my MP to use during an adjournment debate in the House of Commons chamber regarding their healthcare system.

What was it like being in London during Brexit?

This summer was full of unprecedented events in British politics, and was some of the most riveting weeks its government has seen in decades. History was being made in Parliament, and I was right there in the hub of it. I was on the ground watching firsthand while the British government “went to hell in a hand basket,” as some Brits described it. I was there before, during and after the EU referendum and Brexit. I watched David Cameron resign as prime minister the day after the referendum and saw Theresa May become elected as the new prime minister of the United Kingdom. I saw Scottish and Irish members of Parliament debate on seceding from the United Kingdom and watched members of the cabinet and shadow cabinet resigning left and right. London was petitioning to become its own nation, while its former mayor, Boris Johnson, was (figuratively) stabbed in the back during his plot to become prime minister. The Labour Party, where I was working, seemed as if it was about to implode — the party voted over 80 percent in favor of having “No Confidence” in its leader, Jeremy Corbyn. It was a fascinating time in politics, and I felt incredibly lucky to be there during it. The Remain posters, newspapers, my security pass and House of Commons stationary that I came home with are some of my most prized possessions now.

Did any courses and/or professors help you prepare for this internship? Which ones?

Global Politics (POL 105) with Professor Seth Cantey and Business, Government and International Economics (POL 295) with Professor Stephen Bragaw were the two most beneficial classes I’ve taken preceding my internship. Dr. Cantey was the first professor to open my eyes to the globalization of the world and the plethora of cultures and governments beyond our American borders. Dr. Bragaw’s BGIE class was instrumental in enhancing my knowledge of international affairs. It was through his class that I learned about Brexit and British politics prior to going to London.

Did you experience culture shock in London?

Yes, particularly at work. I dove headfirst into British politics and quickly learned how very different it is from the American government. Interning under a member of the Labour Party, I was introduced to a democratic socialist’s perspective. Always in good fun, I was constantly being challenged by my coworkers on my beliefs and had to learn how to back up my ideology with substantial arguments. Issues like gun control, the U.S. presidential election, immigration and healthcare were tossed around as daily banter in the office. I found out early on how difficult it is to reason with someone of an entirely different ideology and how open-minded you must be to effectively communicate. While the two parliamentary aides I worked under were British, my MP was born in India in 1947. Mr. Sharma moved to England on a scholarship to study at the London School of Economics and speaks fluent Punjabi, Hindi and Urdu along with English. English is not the dominate language in his constituency, and whites are a minority. It was fascinating to work in an environment with so much diversity, opening up my mind to how many more cultures there are beyond what I know in Lexington.

I learned more about the United Kingdom political system and its culture than I ever could have imagined. My understanding of the issues and current events exceeded even my highest expectations. I was on the ground witnessing firsthand one of the most turbulent times in British politics, learning more through experience than I ever could have in a classroom. By the end of the summer, I felt confident conversing with locals, and even politicians, about their government without feeling out of my league. It was awesome to see how far I’d come.

Definitely the food. If there is one thing you learn quickly about an unpaid internship in the most expensive city in the free world, it’s that there’s no such thing as a free lunch. Even so, I had some incredible meals at Parliament. Since I had my security clearance and pass for the palace, I was able to eat at any of the restaurants within the estate. I had buffet lunch on the Parliament terrace overlooking the Thames, pizza on the roof of Parliament with a view of the city, and cafeteria food next to people I was used to seeing on television. I would like to thank the British tax system, because my meals at Parliament were some of the cheapest meals of my whole summer.

What did you learn from living in the city where the internship was located?

Maybe most importantly, I learned how to use the tube and the bus system without looking entirely like a tourist. By the end of the trip, I had finally figured out how to look for traffic driving on the left side of the road before crossing the street. I also learned that whether you’re thanking the cashier for your coffee or apologizing for bumping into someone on the street, it is always acceptable to say “cheers.” Unfortunately, I never quite got the British accent down pat, but I did come to realize that every conversation with the British ultimately came around to the question of “You aren’t voting for Trump, are you?” The learning curve was steep living in the big city of London, but by the end of July I think we all had figured out how to be Londoners and we loved it.

I am definitely bringing back to school an appreciation for the W&L work ethic. Even though work in Parliament was a serious affair, the diligence and determination I’ve learned at school had me more than prepared for the work load. While W&L students definitely know how to have fun, we take our work very seriously and work rigorously to accomplish our goals.

I am also happy to report that I am returning to W&L with a newfound set of office skills. I now consider myself proficient with the printer and copier, sufficiently average at Excel, and an expert at making a cup of coffee.

Go for the internship, 100 percent. It doesn’t matter how unqualified you may think you are, absolutely apply for it no matter what. The only thing stopping you from getting the job is yourself, so don’t doubt your abilities. Also, do your homework. You won’t learn nearly enough on British politics until you’re there living it, but make sure to build a foundation for all the knowledge you’re about to gain.

Has this experience influenced your career aspirations? How so?

Absolutely. After interning in the real-life operating room and now this “political operating room,” I have decided that medical school isn’t what I want. I loved the energy, drive, responsibility and pressure that I saw in the work environment of Parliament, and I want a job that mirrors those same values. Also, I’ve learned some things about myself. Before this trip, I never saw myself working in a big city, and certainly not far from home. After this summer experience, I’ve discovered I definitely want to work abroad and would leap at the opportunity to work in London once again when I finish school. 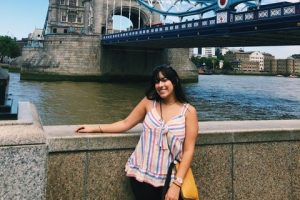