Lessons Learned on the Mat Washington and Lee University Wrestling has teamed up with a nonprofit called Beat the Streets to educate and empower young men and women through the sport of wrestling. 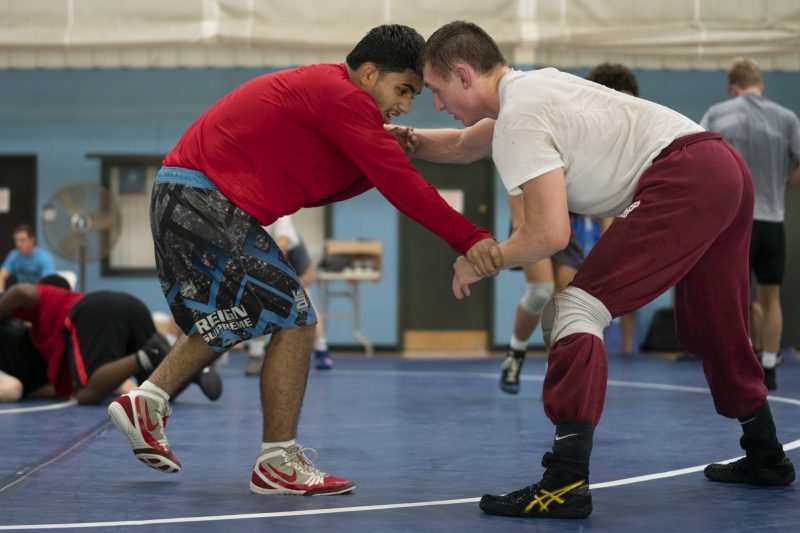 W&L Wrestling and Beat the Streets 2019

When Washington and Lee Head Wrestling Coach Nathan Shearer first attended the Beat the Streets gala in New York’s Times Square in 2012, he had no idea how personal his involvement with the organization would become.

The gala serves as a celebration of wrestling and is a primary fundraiser for what would later become one of the top community outreach programs within wrestling circles.

The Beat the Streets organization began in 2005 when a small group of passionate wrestlers had a vision centered around the idea that if the lessons learned on the wrestling mat— a strong work ethic, grit, perseverance, self-reliance, humility— are applied to other areas of life, then so much more can be achieved in a lifetime.

Shearer enjoyed his first experience at the Beat the Streets gala, and he so believed in the organization’s mission that he turned the annual gala into a gathering for W&L wrestling alumni as a way to give back. It also helped draw his program closer to the nonprofit organization and its goals.

When Shearer pondered what else he could do to help support Beat the Streets’ mission, it hit him: Why not include Beat the Streets in his Generals Wrestling Camp, a gathering that brings in his top prospects from around the country and introduces them to the opportunities available for wrestlers at Washington and Lee?

“Each year, Beat the Streets is sending wrestlers off to colleges around the country,” said Shearer. “My goal is that W&L can join the conversation as something that these young men and women consider. Pairing that with the programming that we were already set to offer to our top prospects seemed like the perfect opportunity. Regardless of whether these students attend Washington and Lee, we can help plant the seed that may lead to them attending college somewhere else—and that is still a win.”

With this goal, Shearer approached university administrators in an effort to receive backing for his vision. The support he received was overwhelming, and Shearer reached out to the Beat the Streets NYC chapter to lay the groundwork for a visit to Lexington. 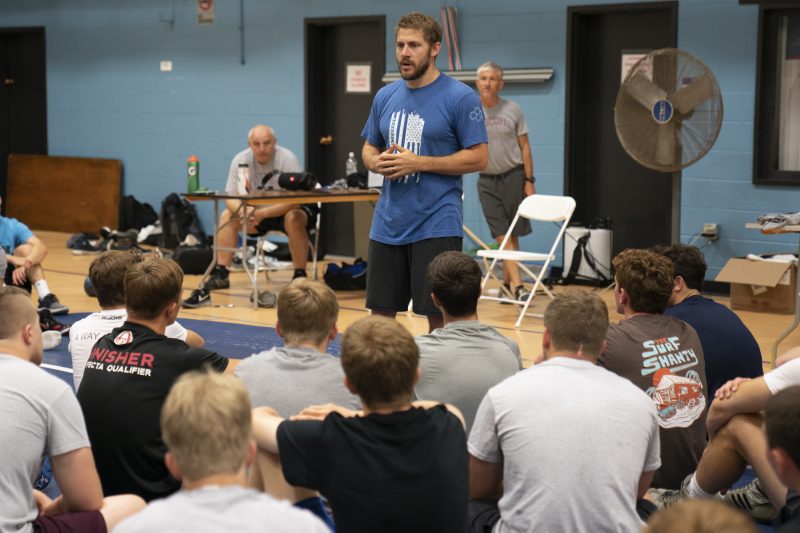 “It took a few phone calls to a few different people with Beat the Streets, but I finally connected with Steven Keith (NYC training center coordinator), who was very interested in teaming up,” said Shearer. “Steven wrestled at Harvard and could really see the opportunity this partnership could produce.”

Keith had just arrived at the Beat the Streets New York chapter after serving two years as the executive director of the Providence chapter. Prior to that, he had been an assistant wrestling coach at Stanford University.

“We’ve done some things like summer camps in the past, but what Nathan was talking about was something different,” said Keith. “This was an opportunity to bring a smaller group to a more intimate environment and really gain some great insight into a college campus and environment.”

Shearer and Keith began laying the groundwork to bring a group of wrestlers from the Beat the Streets NYC chapter to Lexington for the Generals Wrestling Prospect Camp on August 9-11.

On Shearer’s end, he set an itinerary for the camp, which naturally included wrestling instruction and competition against Generals wrestlers and campers, but also opportunities to meet with university administration and a tour of campus. The plans also included one big surprise for the Beat the Streets wrestlers.

“I contacted Rudis, which is the top apparel company in the wrestling community,” said Shearer. “They’re like the Under Armour of wrestling. They agreed to send our Beat the Streets campers shirts, and there may be some opportunity for the company to connect with us on this outreach program for future years.”

Keith sought to select a small group of high school-aged boys to make the trip, finally settling on 12 that would join him on a 6.5-hour drive to Lexington on August 8. Among them was Jayden Cardenas, who enjoyed his visit, noting the differences between Lexington and his home in Brooklyn.

“I’m from Williamsburg, Brooklyn, and it’s not really like this,” noted Cardenas. “There’s people everywhere there and if you walk two blocks you can see all different types of stuff. It’s a bit quieter here than in the city and it’s very beautiful here. I really love the campus.”

Another camper from the Beat the Streets program, Bronx native Wilver Mariano Peralta, noted similar differences from home, but counted his experience swimming at Goshen Pass as one of his favorites across the three days.

“It was beautiful out there and I had a great time swimming and riding the currents,” said Peralta. “We got beat up by the rocks a little, but it was a lot of fun.”

Cardenas and Peralta experienced the surrounding area in their down time, but they also received plenty of advice regarding college and wrestling at the next level.

“The wrestling was pretty good, I learned a lot of new skills that you wouldn’t ordinarily learn somewhere else,” said Peralta. 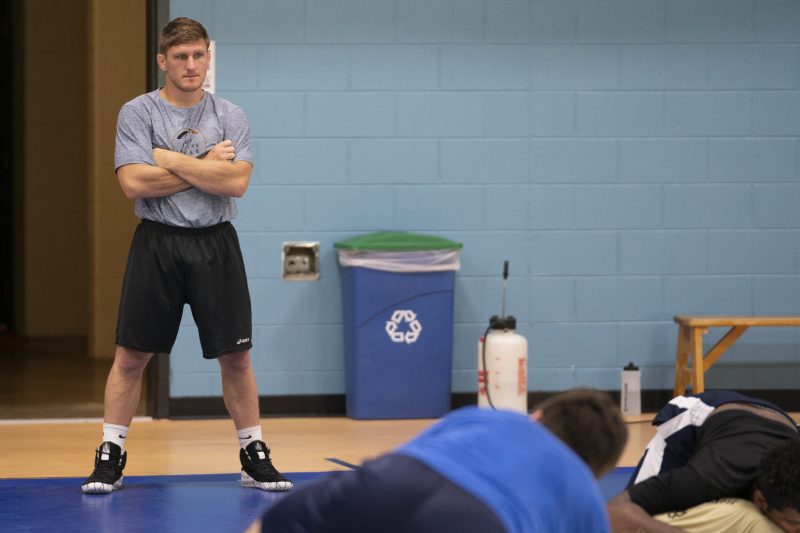 Regarding the opportunity to meet with college faculty and administrators, Peralta added, “Something I would say is that everyone was very welcoming. I feel like they care a lot. I feel like the students are here because they believe they can get one-on-one experience and have someone to lead the way for them.”

Among those who spoke at the camp were Director of Athletics Jan Hathorn; Director for Environmental Studies and Professor of Biology Robert Humston; Lena Hill, dean of the College and professor of English; and Grace Loughhead, associate director of Admissions. Sally Richmond, vice president for Admissions and Financial Aid, also hosted the Beat the Streets campers for breakfast and a Q&A on the final day of the camp.

“The ability to meet with administration and be able to have questions answered was such a great thing,” said Keith. “A lot of our kids don’t think about it much, as most are first-generation and the parents don’t have the experience to be able to guide the kids through the college process. They can hear it from me, but to get on a campus and hear it from the various departments, including the dean of the college, was priceless. Talking about student life and the curriculum really has helped to open their eyes to what is available.”

For Hill, speaking to the group was not only an opportunity to provide information, but to uphold the organization’s mission.

“I was really excited and grateful to be able to speak with them,” said Hill. “I was not familiar with Beat the Streets, but when I heard their mission, I was eager to come to the camp and speak with them about what a liberal arts education is like. I let them know about opportunities like study abroad and Spring Term, and I talked about why I am such a proponent of a liberal arts education. We had a great conversation and I thoroughly enjoyed the experience.”

Shearer also approached the W&L Admissions Office early on about serving a role in educating the campers on the college process. According to Richmond, the ability to engage and support community-based organizations like Beat the Streets is an integral part of the university’s institutional enrollment priorities.

“We want to make sure that the messaging the students and parents are receiving is consistent, and we want people to walk away feeling the harmony of the messaging,” said Richmond. “Athletics partnerships matter to us as we think about increasing the socio-economic and ethnic diversity of our students. So, when I read about Beat the Streets and what their mission was, I felt like there was synergy there.”

Loughhead presented a formal discussion with the campers on the final day of the event, detailing the college application process to the parents and students in attendance.

“Everyone who was at the camp was given a broad overview of W&L, so I spent a lot of time with the attendees on the application process and financial aid, but we spent a good 20 minutes just opening it up for questions,” remarked Loughhead. “I thought one of the Beat the Streets campers had one of the best questions, which was ‘What are the biggest mistakes most applicants make?’ I was so impressed with their thoughtfulness and their willingness to engage.”

By all accounts, the experience was one to be remembered for all involved.

“Talking to all these people and taking the tours, I learned so much about the college process and moving on to the next step in my life,” Cardenas said.

Keith added, “I want to thank Washington and Lee and coach Nate. This whole experience has been unbelievable. I know that the kids have had a great time and they are going to be talking about this with their friends forever. They posted all over social media about how great this experience has been.”

As for Shearer, he couldn’t be happier with how the weekend went.

“Honestly, I don’t look at this as a wrestling camp, this was bigger than wrestling,” said Shearer. “This was an opportunity to experience the beauty of the Shenandoah Valley and learn more about what the next four years of their life could be like. When they go home and think about their experiences at a small liberal arts school in rural Virginia, and realize this might be a fit for them, everybody wins. That fits the mission and priorities of both organizations.”

To learn more about the Beat the Streets organization and their seven chapters nationwide, please visit https://beatthestreets.org/. 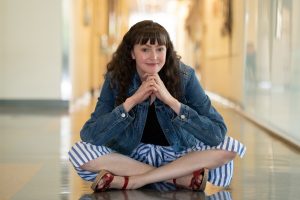