On Thursday, Jan. 24, students at the Washington and Lee University School of Law raised over $28,000 during the 2013 Phi Alpha Delta (PAD) charity auction. The last eight auctions together have raised nearly $130,000 for local charities and other initiatives.

Every year PAD members choose charities and other causes to benefit from the auction. The proceeds this year will be split amongst several organizations, including HoofBeats Therapeutic Riding Center, Meals for Shut-Ins, and the Rockbridge Area Free Clinic. Some auction proceeds also will go to help provide a scholarship for a W&L law student working in a public interest position.

During the PAD auction, students bid on items donated by Law School faculty, staff and students. Items auctioned this year included numerous meals and outings with professors, wine and beer tastings, Kenny Chesney concert tickets and BarBri tuition vouchers. In addition, students bid on the honor of becoming “Dean for a Day,” which includes a good parking spot and the privilege of issuing one “edict.”

Phi Alpha Delta is a service fraternity that works for the law school and local communities and sponsors many charity events including the auction, a canned food drive, and a blood drive. PAD holds membership drives in both the fall and spring semesters. 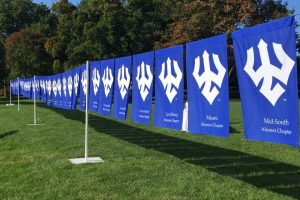