“The LEAD Banquet continues to bring together members of our community in celebration of the meaningful work happening across campus.”

The Leadership Education and Development (LEAD) Banquet was held Sunday, April 2 at Washington and Lee University and was an evening of celebration. Many individual and student accomplishments that were completed within the past year were recognized.

“The LEAD Banquet continues to bring together members of our community in celebration of the meaningful work happening across campus,” said Megan Hobbs, assistant dean of students and dean of sophomores.

“It’s a time to showcase the efforts and impact of our dedicated campus leaders, and it’s a time to thank advisors and students alike for their commitment to student engagement, personal development and continued mentorship. The true spirit of the Washington and Lee experience lies within the influence made by our students, and the banquet reminds us of all that goes on, on an annual basis.

“I would also like to publicly recognize the senior LEAD Banquet Committee members: Kaitlin Krouskos, Catherine Fonvielle, George Park and Prakhar Naithani. Each of them have been thoughtful about new marketing, communication and implementation strategies — all of which have increased awareness of our efforts and attendance at the event each year.” 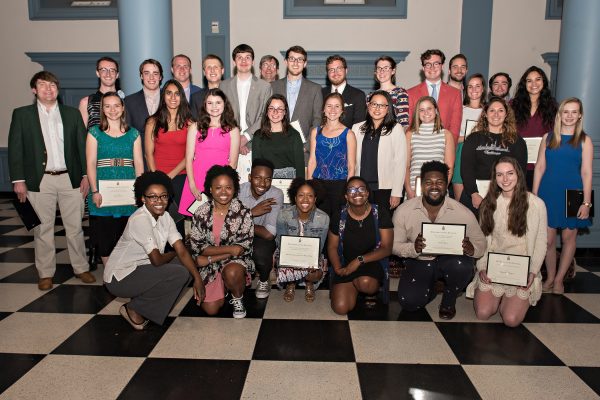 The LEAD Banquet awards and 2017 recipients are:

Recognizing a student who demonstrates a commitment to their community through innovate service.

Recognizing the campus group or specific event that proved to be impactful by engaging and educating a significant number of volunteers and created a meaningful difference for the population served – whether locally or in another community.

Recognizing the student organization/chapter whose philanthropic efforts have made the most impact on our campus while supporting a local/national/global cause. The most funds raised per capita and the most innovative way of raising those funds is a factor in selection.

Recognizing a student that is passionate about leadership education and its practice. This student should bring innovative ideas to the table and exude a high level of commitment to empowering other student leaders.

Recognizing a student whose leadership has been most impactful during the past academic year.

Recognizing a Greek man making the greatest and most positive impact on the fraternity and sorority system during the past academic year.

Recognizing a Greek woman making the greatest and most positive impact on the fraternity and sorority system during the past academic year.

Recognizing a rising junior (current sophomore) who has shown involvement and leadership within the W&L academic and extracurricular communities and who has furthered discussions of women’s issues on campus and beyond.

Awarded by the Student Affairs Committee to an undergraduate student who demonstrates extraordinary commitment to personal scholarship and to the nurturing of intellectual life at Washington and Lee.

Recognizing a senior undergraduate student whose efforts have done the most to bring a greater awareness and competence of diversity on campus.

Recognizing the event that best impacted Washington and Lee during the current academic year.

Not Unmindful of a Sustainable Future Award: Reid Calhoun ’17

Recognizing a student who leads sustainability efforts either for the W&L campus or for our global community.

Not Unmindful of a Sustainable Future Award: Tessa Horan ’18

Recognizing a student who leads sustainability efforts either for the W&L campus or for our global community.

Recognizing the student organization or student-led event that has made an impact towards sustainability related efforts either on the W&L campus or in our global community.

Adviser of the Year: Erich Uffelman

Recognizing a campus adviser who goes above and beyond in their efforts to support student initiatives, foster relationships and provide opportunities for new experiences.

Recognizing a student who has brought the most depth and breadth to the university during the past academic year.

Recognizing the student organization that has shown excellence in leadership, management and programmatic efforts. Allocation of funds is a factor in selection.

Recognizing a student who has made the greatest contribution to the Division of Student Affairs.

Honoring a senior for his or her campus leadership.