John Maass ’87: Enthralled with History The historian, author and museum professional swears by the value of tramping the terrain where history happened.

By Washington and Lee University
January 25, 2018 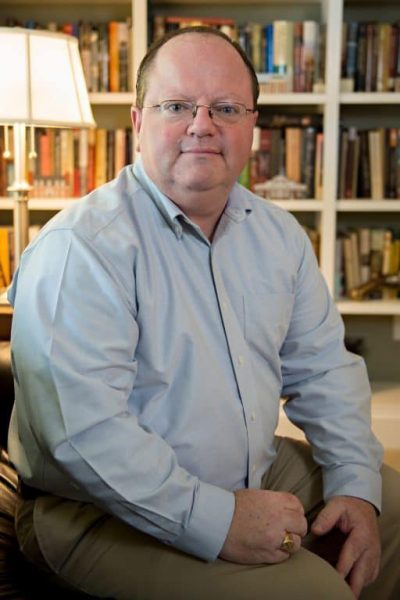 John R. Maass ’87 doesn’t just read about history; he walks the same ground and visits the same places as the people he writes about. You can’t get a real sense of history, he feels, unless you see and experience it.

That has especially held true for his last three books on military history — “The French & Indian War in North Carolina: The Spreading Flames of War” (2013), “The Road to Yorktown: Jefferson, Lafayette and the British Invasion of Virginia” (2015), and “George Washington’s Virginia” (2017). He just started on his latest, about the Battle of Guilford Courthouse, which took place during the Revolutionary War, in 1781.

During the writing process, he visited all the sites he mentions in the books. “I traveled every road that Lafayette and Cornwallis traveled during the Virginia Campaign, from Williamsburg to Charlottesville to the Potomac. You have to do that to get a sense of what the events were,” he says. “You have to combine the actual sites with your reading.”

He became enthralled with history at the age of 11, when his family moved from Long Island, New York, to the rural countryside of Rockbridge County. “I plopped down in the middle of Civil War country,” he says. “All I read from ages 13 to 30 was history. I never considered any other majors but history.”

History and an Army ROTC scholarship led him to W&L. “Anytime I go anywhere now and get a whiff of English boxwood, I instantly think of Washington and Lee,” he says. His professors emphasized “teaching as opposed to advancing their own credentials and publications. They were supportive of kids who were interested in history.”

Maass went on to earn an M.A. in history from the University of North Carolina-Greensboro. He was in his late 30s, however, when he decided to quit his job in insurance to pursue a Ph.D. in early American history at the Ohio State University. The decision was risky based on the employment market for his field, but it paid off when he landed a job as a historian for the U.S. Army Center of Military History, at Fort Lesley J. McNair, in Washington, D.C.

Writing has always been an important part of his work, both personally and professionally. He enjoys the craftsmanship, figuring out how to put everything together to include all the facts, but to also add personality and flair to his writing.

Looking for a new challenge after 10 years at Fort McNair, Maass recently transferred to the new National Museum of the U.S. Army, at Fort Belvoir, in northern Virginia, projected to open in the latter part of 2019.

In his new position, he’ll be working with exhibits, and writing text, exhibit panels and item descriptions as well as guides and narratives. He’ll also work with programs and education for the state-of-the-art museum.

“This has been in the works for 20 years, and now we have a lot to do in two years,” he says. “It’s the most dynamic, exciting and energizing project going on in Army history right now. It will be amazing.”