‘A Big Optimist’ Lewis Perkins '93, the self-described “liberal arts kid” who received the Distinguished Alumnus Award at his 25th reunion in April, nurtured his creative spirit at W&L. Now he brings that spirit to a nonprofit that encourages sustainability. 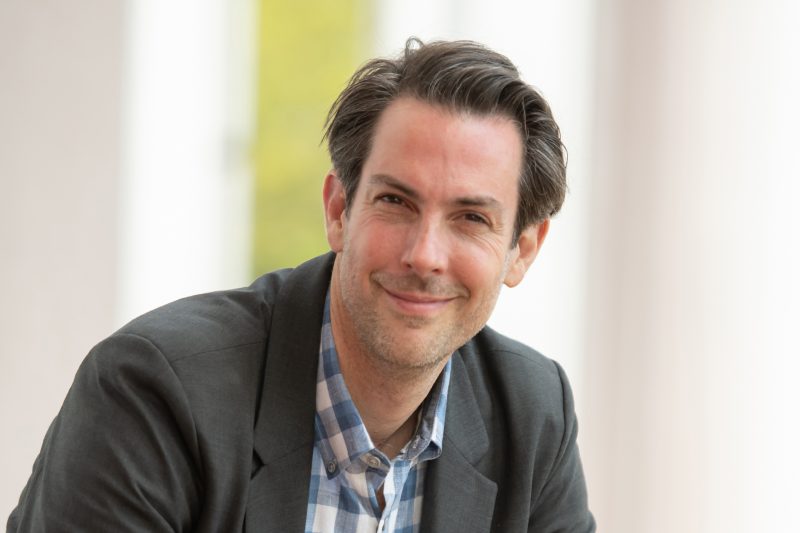 “I was totally the liberal arts kid, and that was a reflection of the kid I was when I was growing up. I like art, theater and music. I enjoyed being creative, and now I do that with business strategy.”

“It was like reading the gospel,” says Lewis Perkins of the moment he learned how Cradle to Cradle Products Innovation Institute helps companies rethink design and manufacture to make a positive impact on the environment.

Perkins joined the institute in 2012 as senior vice president and took over as president in 2015. “I thought this was the answer,” he says of that realization. “This was giving back to society. It was a whole system plan for the planet. We have known all along that everything needs to be made with mindfulness. It made sense.”

Perkins had long wanted to help companies “find their soul.” He had that epiphany after seeing how some institutions practiced philanthropy to counteract a problem they were causing. “They were saying, OK, we are creating unintentional negative impacts, but our goodwill will override that,” he says.

Cradle to Cradle boasts about 300 companies and over 6,000 product types. “We believe in investing in people and in local communities where the product is made,” Perkins says. “We are like the LEED certificate program for products. We provide the framework and train consultants to do the work.”

His work involves a great deal of creativity. “I was a high-energy, creative kid that didn’t want to sit still,” he says. Perkins cultivated that spirit at W&L. He’s a proud son of the South, born in Tallahassee, Florida. Along with his brother, John Perkins ’90, he knew about the university because of two Tallahassee alumni, Judge Robert P. Smith Jr. ’54 and his son, Todd Smith ’83. When Perkins visited John on Parents and Family Weekends, the university felt like home.

As a first-year, he took studio art and psychology. “I was always interested in human nature,” he says. “I was totally the liberal arts kid, and that was a reflection of the kid I was when I was growing up. I like art, theater and music. I enjoyed being creative, and now I do that with business strategy.”

After graduating with a B.A. in art, he became interested in philanthropy, and worked for Atlanta’s High Museum of Art, and for W&L, on a capital campaign. Perkins, who holds an M.B.A. with a focus on social responsibility from Emory University’s Goizueta Business School, also logged several years with Mohawk Industries as director of sustainable strategies.

Today he travels the world nonstop. “I spend as much time at our office in Amsterdam as I do at our headquarters in San Francisco,” he says. “For me, it’s about being around a diverse set of people, thinking about solutions at the larger level for the planet. It’s talking about a world where all systems are connected, and there is no isolation. I love being with people who think like I do and are optimistic. I’m a big optimist.”

One of the things he loves about W&L is the broad worldview he experienced in classes and with peers and friends. “It was a like-minded community, and it’s been fun to stay in touch, to see how we have all expanded,” he says. “There was a sense of duty and honor that came from W&L. One of the reasons I got into this job was because I saw injustice. W&L instilled principles, honor and values in all of us.”

FAVORITE PROFESSOR: The late Sidney M.B. Coulling III ’46, the S. Blount Mason Jr. Professor of English Emeritus. “He was amazing. Even though he didn’t always give me a good grade on papers, he taught me how to write. Between him and Pam Hemenway Simpson, my adviser and head of the Art Department, I learned a lot.”

MEMORABLE CLASS: Chaos Theory. “I remember writing my paper on Jackson Pollock because of the random way he chose to create. That left an impression on me.”