A Body in Motion Taylor Gilfillan '13, a 2013 Teach For America (TFA) corps member, teaches underprivileged students at a school plagued by a high teacher turnover rate.

“I realized that I really wanted to have a career where I had the most impact on people’s lives — those who have been underserved and are ready for empowerment.” 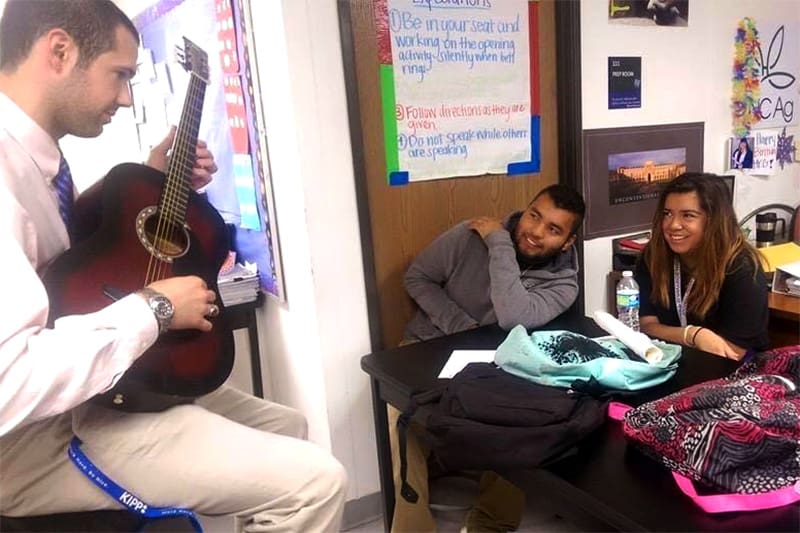 On his first day at KIPP (Knowledge is Power) Sunnyside High School in Houston, Texas, Taylor Gilfillan ’13 promised his students (then freshmen and sophomores), “I’m going to be here when you walk across that stage at graduation.” This was no small commitment. Taylor, a 2013 Teach For America (TFA) corps member, was teaching underprivileged students at a school plagued by a high teacher turnover rate.

Taylor had originally planned to attend graduate school. A physics major at Washington and Lee, he spent a summer doing research on laser dynamics with Professor David Sukow and presented papers at conferences. “I knew I had a passion for physics and thought a Ph.D. was the logical next step,” he said. “But during my senior year, I realized that I really wanted to have a career where I had the most impact on people’s lives — those who have been underserved and are ready for empowerment. I thought being in the classroom might be one way to do that, I’m really appreciative that TFA gave me an avenue to pursue that goal.”

Helping others seems to be in his DNA. Taylor spent several summers as a sports camp counselor at the Alexander YMCA in Raleigh, North Carolina. At W&L, he served as a student-to-student mentor, as activities chair for the First-Year Orientation Committee and as an assistant head resident adviser. He also played varsity basketball and was president of the physics honor society and a teaching assistant for the Physics Department. His senior year, Taylor was named the 2013 John W. Elrod General of the Year by his peers for his contributions to his school. “Kind-hearted service to others” was, and continues to be, his mantra.

At KIPP Sunnyside, Taylor has taught geometry, biology, physics, pre-AP physics, and AP physics 1. Over the last couple of years, he learned that “you’re never just a teacher; you’re a mom, a dad, a counselor, social worker, problem solver and a mediator. I had to be all those things for my students and needed to apply those skills inside and outside my classroom.”

While TFA provided him with some basic classroom training — such as creating a coherent curriculum and behavior management — Taylor said, “This has been a journey. The single biggest hurdle I had to jump over was being too hard on myself. I have high expectations for me and my students, and when I have a tough day, it’s hard to forgive myself. But I have to embrace it and be able to give myself grace. I have to accept that I will make mistakes, that the lesson won’t always go according to plan and to not see that as a failure, but as a chance to grow. It can seem like really high stakes when you’re talking about closing the achievement gap and fighting to ensure an excellent education is accessible to everyone. It’s an ambitious goal. So I had to learn to be a reflective teacher, constantly tracking what went well, and how I could improve. Whether it was a good or bad day, at midnight, I had to flush it and be ready to start a new day — a clean slate for me and my kids.”

At KIPP Sunnyside, he has some free range in the classroom and has introduced innovative technologies. One involves a pilot program involving OpenStax Tutor, interactive online courseware designed to customize learning for each student. That collaboration occurred through the power of the W&L network: Duke Cancelmo ’80, the Houston alumni coordinator for W&L’s Elrod Fellowship program, introduced Taylor to Micaela Coffey McGlone ’09, a research specialist at OpenStax. “I’m piloting the program in my pre-AP physics class, and it has some pretty cool software,” said Taylor. “Students in that class got free laptops to access the online program. The program tracks student growth by topic, and can adjust the difficulty of problems to best support their learning. It really helps them become proficient with concepts at a pace that’s personalized for them.”

Not satisfied with what he’s learning on the job, Taylor applied for and was selected to be the physics course leader for KIPP Houston Public Schools. He leads regional professional development for his region’s physics teachers and manages the curriculum electronically to provide other teachers with the resources they need to succeed in the classroom. “I think that no matter what I do in the next phase of my life, teaching will provide me with a vital skill set,” he said. “And if I decide to continue with teaching, this opportunity will help me become the excellent teacher my students deserve.”