A Commitment to Service Second Lieutenant Chris Woodings ’21 received the Captain Jay W. Stull Memorial Award in recognition of his determination and strength of character. 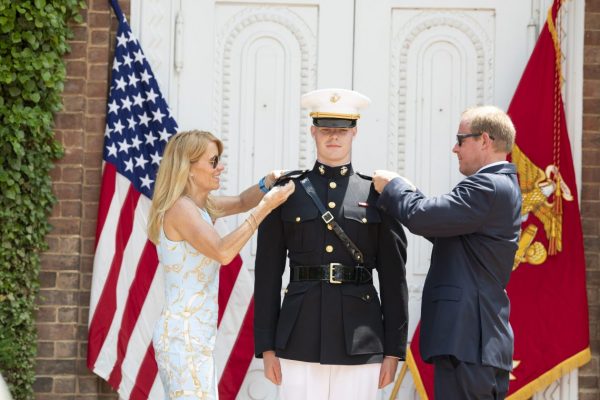 “I hope to embody the selfless and courageous spirit of Captain Stull, and I will work tirelessly to live up to his legacy.”

Do you have what it takes to be a Marine? Chris Woodings ’21 is one of the few and the proud who does, and he commissioned into the United States Marine Corps as a Second Lieutenant following his W&L graduation ceremony last month. A dedicated student, talented lacrosse athlete and disciplined trainee, Woodings pursued his goal with admirable determination. In recognition of his hard work and strength of character, Woodings received the Captain Jay W. Stull Memorial Award, which will provide him with a stipend to relocate and establish himself at his first duty station. In October, he heads to Quantico for The Basic School, where all newly commissioned officers are trained in the high standards of the Marine Corps.

“I hope to embody the selfless and courageous spirit of Captain Stull, and I will work tirelessly to live up to his legacy,” Woodings said.

Captain Jay W. Stull graduated from Washington and Lee in 1960 and went on to establish a career as a highly respected Marine officer. He died in action at Khe Sanh, Vietnam, on February 28, 1968. Later that year, Stull’s widow, parents and brothers established a memorial award at W&L to support young Marines.

Stull’s brother, Steve Stull ’63 receives regular updates on award activity from the university, and Woodings recently wrote to him in gratitude for ensuring that Captain Stull’s memory lives on as an inspiration to young Marine officers like himself. After earning the award, Woodings learned that Captain Stull also played lacrosse at W&L.

“I plan to pay my respects at Captain Stull’s place of rest in Arlington when I am stationed at Marine Corps Base Quantico,” Woodings said.

From an early age, Woodings and his older brother Robby shared an interest in the military. His brother graduated from West Point in 2019 and is now an infantry platoon leader in the Army. While Woodings admired his brother’s aspirations, he chose a different path. “I wanted a more traditional college experience, with options to study abroad,” he said.

Both of Woodings’ grandfathers served in the Navy, and the Marine Corps motto, Semper Fidelis — often shortened to Semper Fi — really resonated with him.

“I appreciate the commitment to character development and the mission of officers to return their Marines to civilian life better than when they joined the Corps,” Woodings explained. “I chose to become a Marine to protect the freedoms we enjoy in the United States, a personal desire for challenge and the best leadership training in the world, and out of a desire to help others who can’t help themselves,” he said.

“People look at the military and they think it’s nothing but combat, but the Marine Corps is engaged in a large number of humanitarian aid missions,” he said.

On top of that, Woodings attended the Marine Corps Officer Candidates School, participating in Platoon Leaders Class Juniors and Seniors over two summers and training regularly during the school year. Because there is not a Naval ROTC program at W&L or VMI, Woodings sought out the Marine Corps Officer Candidates School program before matriculating as a first-year. The Marine Officer Selection Station, based out of Roanoke, holds some events for aspiring marines in the area, but otherwise, each officer candidate is responsible for training throughout the year before heading to the intensive six-week Platoon Leaders Class during the summer at Quantico.

During his first year, Woodings had a class with Associate Provost and Redenbaugh Professor of German Paul Youngman, whom he discovered was an Army veteran. The two have remained in contact over the past four years, with Woodings seeking advice from Youngman as a mentor on topics ranging from his military pursuits to study abroad opportunities. Youngman recommended Woodings for the Captain Jay W. Stull Memorial Award.

“There is a very small community of people on campus who those aspiring to the military can reach out to, and I was happy to be there for Chris,” Youngman said. “I am proud of what he has been able to accomplish with minimal structure. It is always impressive to me when young people choose to go into the service, but in this case, doubly so, as he went after it on his own,” he said.

Youngman helped Woodings plan his commissioning ceremony, with Woodings’ brother serving as his commissioning officer. In addition, his sister and parents were in attendance as well as his academic advisors, lacrosse coaches, some fraternity brothers, teammates, classmates, close family friends and W&L President Will Dudley. “It was really special,” Woodings said. “I got to put on my dress blues for the first time, and after affirming my oath of office, this title as a leader of Marines that I had worked toward since my freshman year was official.” 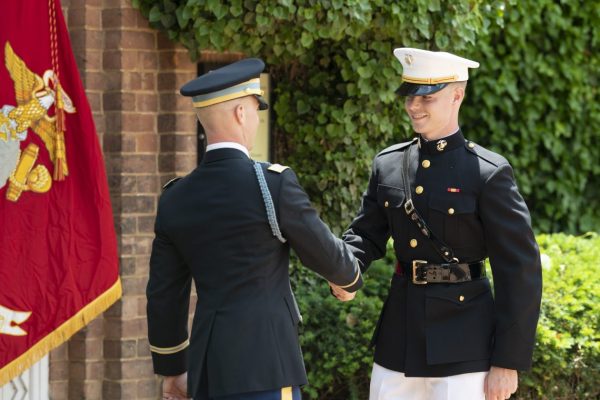 Chris Woodings ’21 shakes hands with his brother and commissioning officer Robby Woodings after reciting his oath.

While Woodings is honored to be recognized with the Stull Award, its significance goes far deeper. “I hope that one day I can have as much of an impact on young Marines as Captain Stull has. I am grateful to the Stull family for their generous donation to the school, which has enabled the memory of their loved one and his sacrifice to live on and inspire young Marine officers such as myself,” Woodings said.