A Dish Serving Centuries of History This porcelain dish, which tells a story about the Dutch East India Company and the Dutch Golden Age of the 17th century, will be used in classes ranging from art history to economics. 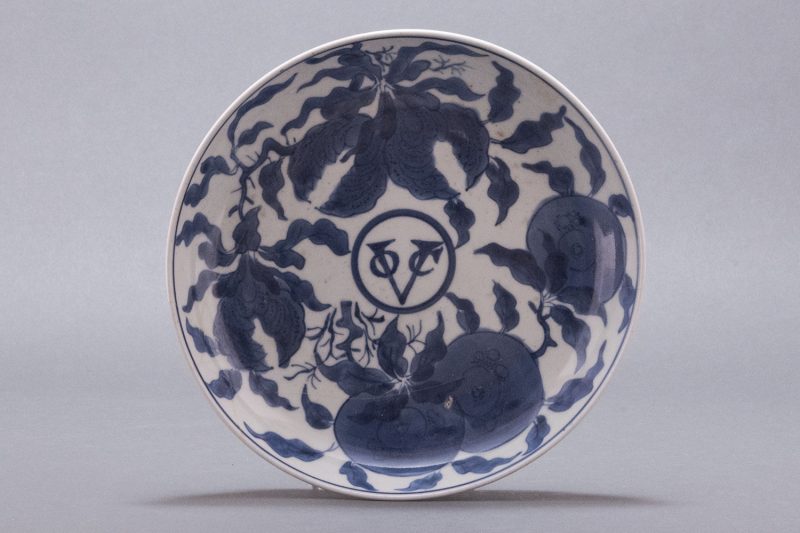 The conjoined letters “VOC” on the center of this dish are thought to be the first globally recognized corporate logo. Together, the three letters form the monogram of the Verenigde Oostindische Compagnie, or the United East India Company of the Netherlands, better known in English as the Dutch East India Company.

Established in 1602 by the Dutch government to facilitate trade between the Netherlands and Asia (which was then known as “the Indies”), the VOC was one of the first modern, global corporations. It was granted a monopoly on all Dutch trade with Asia and was given the right to make treaties with foreign governments, purchase or conquer territory, and even make war on the enemies of the Netherlands and its own business interests.

The VOC grew to be one of the largest and most powerful corporations the world has ever known. It was one of the economic engines of the Dutch golden age and helped create the modern global economy. The first stock certificates were issued for the VOC, and one of the earliest modern stock exchanges, the Bourse in Amsterdam, was established to trade in them. Insurance, maritime law and the futures market all were developed or expanded to facilitate its operations. It helped popularize a range of consumer goods and foodstuffs, such as pepper, nutmeg, printed cotton, porcelain, tea and coffee. While bringing wealth, power and prestige to its employees, investors and the Dutch nation, it conquered, exploited and enslaved tens, if not hundreds, of thousands of people throughout Africa and Asia. It was also one of the most long-lived corporations the world has seen, surviving nearly two centuries until 1798.

The VOC’s monogram served as a practical mark of ownership as well as a symbol of the company’s pride. It marked everything from the company’s headquarters in Amsterdam, to the coins it minted for use in Africa and Asia, to the cannon on its ships. It was literally branded, or burned, onto the crates of spices, silks, porcelain and other exotic Asian luxuries the company traded. It was probably one of the most recognized, envied and feared visual symbols of the 17th century. 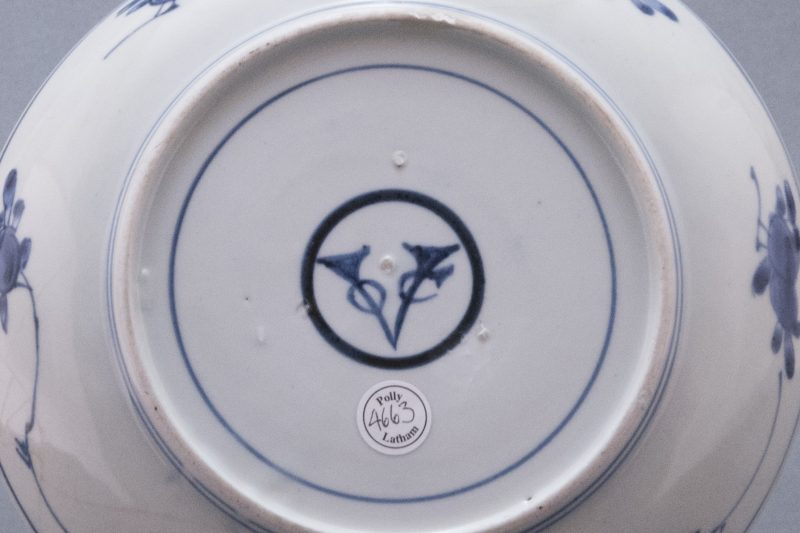 The monogram of the Verenigde Oostindische Compagnie, or Dutch East India Company, is also on the bottom of the dish.

Among the many things branded with the company’s logo were Japanese porcelain dishes made for use at the VOC’s trading settlements in Japan, Indonesia and South Africa. Reflecting the type of connections made possible by global trade, the very Dutch monogram is surrounded by a very Chinese design: three peaches and three Buddha’s hand citrons (a fruit whose body is segmented into finger-like sections). Both fruits are traditional Chinese symbols of a wish for blessings and a long life, and were common motifs used on a range of objects, including porcelain dishes. Japanese potters copied the design from Chinese dishes, and then added (no doubt at the request of Dutch merchants) the VOC monogram.

With the monogram on both its front and back, this particular dish, made in Arita, Japan, between 1680 and 1700, is quite possibly one of the “2,400 pieces for the house of the Hon. Governor-General, all painted inside and outside with the mark of the Company” that were ordered in 1686 for the company’s Asian headquarters in Batavia (modern-day Jakarta, Indonesia). There they would have been used, probably in combination with silver dishes, to set an elegant table for the Governor-General to entertain other high-ranking VOC officers, merchants and ship captains.

This dish comes as a gift from Bruce Perkins ’73. Perkins helped unpack the original gift of ceramics from Euchlin and Louise Reeves, the founders of the Reeves Collection, an experience that inspired him to start collecting ceramics. The dish will join Washington and Lee’s small but growing collection of Japanese export porcelain. In addition to being displayed in the Japanese porcelain gallery, it will also be used in classes ranging from art history to economics to provide a concrete example of the role the VOC played in the sustenance of the Dutch Golden Age of the 17th century and the creation of our modern global economy.