A ‘Dream Act’ Tolu Olubunmi ’02 speaks up for immigrants and refugees. 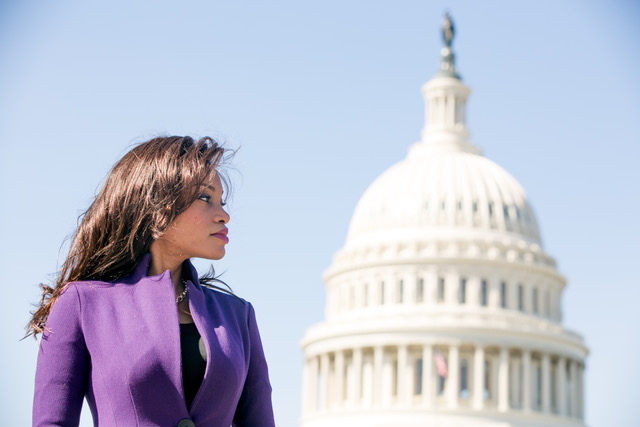 “We need those stories to be told, to have faces attached … We miss a lot when we don’t speak up and shift public perceptions.”

As a chemistry-engineering major with an entrepreneurial spirit, Tolu Olubunmi ’02 dreamed of owning her own engineering firm.

Instead, circumstances led her to become one of the country’s leading activists on behalf of immigrants and refugees. Today she runs a consulting firm, Ada Consulting, that builds global social responsibility and philanthropic initiatives focused on immigrant integration, employment, access to technology and education. Over the years, she has used social impact campaigns to share her story and those of other “dreamers” — undocumented immigrants who were brought to the U.S. as children, lived in the country for most of their lives and want to become legal citizens.

Olubunmi’s story begins when she arrived in the U.S. from Nigeria at 14 without her parents. At 8, she already knew she wanted to to study engineering and thought she wanted to attend Princeton.

At the urging of her guidance counselor and after meeting with a W&L representative at a college fair, she visited W&L and knew “it was meant to be. The weekend changed my perspective.” Olubunmi thrived at W&L, enjoying both her science classes and humanities courses in philosophy and Greek mythology. She has passed the love of W&L on to a niece, who is a rising sophomore at the university.

“I did my best to be a good citizen and commit myself to my new home.” But, after graduating, Olubunmi discovered she had lost access to her legal immigration status and was now in legal peril.

She visited countless immigration attorneys hoping to regain her legal immigration status. One attorney advised her that she had only two options: a change in U.S. immigration law or marriage to a U.S. citizen.

“I chose the easier route,” she recalled laughing. “I decided to help change U.S. law.”

Another lawyer told her about the Dream Act that was then moving through Congress and would help people like her. She contacted the drafter of the bill at the National Immigration Law Center in Washington, D.C., and volunteered her services.

As an unpaid, full-time volunteer, she learned about policy, law and communications. “I spent every waking moment educating myself on the pertinent issues and creating opportunities to prove my competency. I worked diligently for the cause, and I quickly built a reputation for being a strategic thinker and an effective communicator.”

The Dream Act, first introduced in the Senate in 2001, still has not passed Congress. In 2018, both Republicans and Democrats are trying to find solutions that will keep nearly 700,000 young adults from being deported to countries they haven’t lived in for most of their lives.

Olubunmi has run into much misinformation about Dreamers as she progressed from volunteer to paid strategist to an internationally recognized advocate. One congressman, for instance, told her that the country needs more STEM (science, technology, engineering and math) immigrants, not “Mexicans who can’t speak English.”

“I am a STEM graduate, and I’m African” she told him.

Those types of encounters solidified Olubunmi’s resolve to tell the Dreamers’ stories. “We need a diversity of stories of those affected,” she said. “I take every opportunity to tell my story, although it is difficult and risky to share.”

Today, Olubunmi continues to fight to protect Dreamers and President Barack Obama’s DACA (Deferred Action for Childhood Arrivals) proclamation, which allowed Dreamers to remain in the country without fear of deportation.

She says all Dreamers who speak up are incredibly brave. “We need those stories to be told, to have faces attached. It is a very personal decision. We miss a lot when we don’t speak up and shift public perceptions.” She advocates for solutions grounded in reality that will “make a difference that can be felt by generations to come.”

In 2010, Olubunmi founded Ada Consulting, which managed the communications strategy for a broad coalition of national immigrants’ rights, education, labor and civil rights organizations to advance the Dream Act. Another venture, Lions Write, focused on building social impact campaigns, where “we share our own stories in our own words — giving voice and value to the voiceless.” The initiative derives its name from an African proverb, “Until the lions learn to write, all the stories will glorify the hunter.”

Olubunmi’s advocacy work has led to many new opportunities. Soon after founding Ada Consulting, she became one of 31 Dreamers featured on the cover of Time magazine. Of the 31, she was one of three who did not qualify for the DACA program because of age — she was one year older than the cutoff. A follow-up article by the magazine noted that her status “hasn’t stopped her from advocating for immigrant rights, both domestically and abroad.”

Olubunmi serves on numerous boards, including the board of directors of USA for IOM, the U.S.-based nonprofit partner of the U.N. Migration Agency. She is an advisor to the social impact investment platform BRAVA Investments. She also is a founding board member of the United We Dream Network and co-founder of Immigrant Heritage Month.

The World Economic Forum asked her to serve on its Global Future Council on Migration, and through the council, she co-chairs Mobile Minds, an initiative that advances cross-border remote working as an alternative to physically moving to another country. In 2015, the World Economic Forum recognized her as one of 15 Women Changing the World. 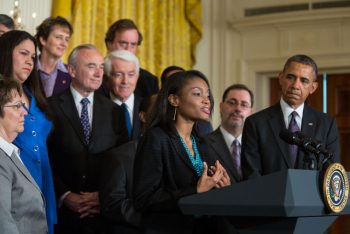 She has been a featured speaker at the White House and introduced President Obama as he pushed for passage of immigration legislation Olubunmi had worked on. She also has spoken to Congress, and at many universities around the country. She taught a seminar on social entrepreneurship at Barnard College.

She was named an inaugural Leadership Institute Fellow at the Center for American Progress. The center announced the program with a statement that the Fellows “will bring the concerns and talents drawn from their life experiences to bear on the policy challenges and opportunities presented by an increasingly diverse America.”

In addition to the Time article, other media have featured her story, including NBC, BBC, BET, and MSNBC. Most recently, the Anti-Defamation League named her a 2017 ADL In Concert Against Hate honoree.

Despite of the challenges she has faced, Olubunmi has decided “to put my pain aside to help others.” She looks at the opportunity to share her story as “an uncommon privilege” to help advance understanding and provide a unique perspective to shine light on migration and refugees.

“I love thinking through new, creative ways to solve old problems,” she said. With so much gray in the world, “I like to drop in a little color wherever I go.”