‘A Fragment of a Rare Form’ A jar on display in the Reeves Center is an example of talavera poblana, which is tin-glazed earthenware made in Puebla, Mexico.

By Ron Fuchs, curator of the Reeves Collection
January 17, 2020 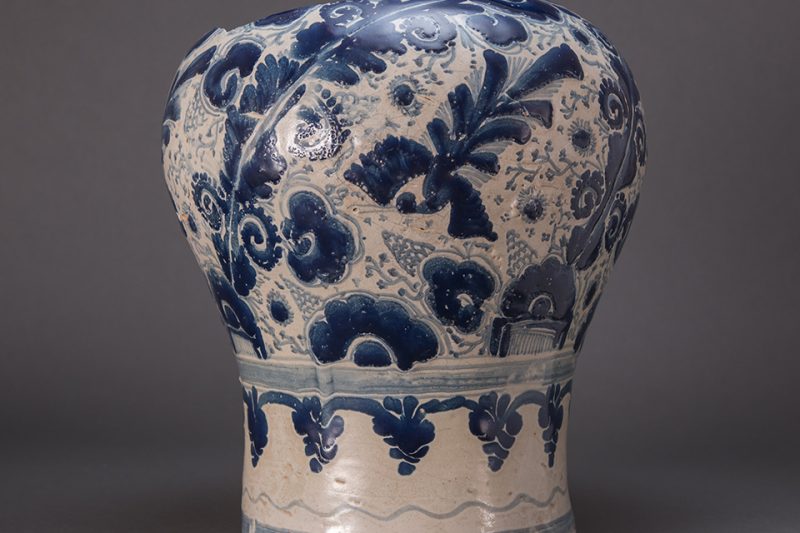 This jar, which is on display in the Reeves Center, is an example of talavera poblana, a tin-glazed earthenware made in Puebla, Mexico.

Though only a fragment of its former self, this jar is a rare example of the exchange of technology and design between Europe, Asia and the Americas.

It is an example of talavera poblana, which is tin-glazed earthenware made in Puebla, Mexico. There, Spanish potters working with indigenous Mexicans used European techniques and local materials to make pottery that one civic booster described in 1698 as being “finer than that of Talavera [a Spanish city famed for its fine pottery], and can compete with that of China in its fineness.”

While a bit of an exaggeration, the statement certainly reflects the high regard with which talavera poblana was held. Puebla, located about 60 miles south of Mexico City, was founded in 1531 by the Spanish, who had conquered Mexico in 1521. Spanish émigré potters began working in Puebla in the mid-16th century, and in the 17th and 18th centuries, talavera poblana was the most widely distributed ceramic in the Spanish colonies in the Americas, being traded as far south as Venezuela and as far north as New Mexico.

Much of Puebla potters’ output was inspired by Chinese blue-and-white porcelain; according to the 1653 potter’s guild ordinances, “the fine ware must be painted in the manner of the ceramics of China, very blue, made in the same manner with relief in blue.” Large quantities of Chinese porcelain could be found in Mexico, brought there as part of the Manila galleon trade, which moved Asian goods from the Spanish trading of Manila in the Philippines to Acapulco on the Pacific coast of Mexico. From there, they were consumed locally in New Spain or taken overland to Veracruz on the Caribbean and loaded onto ships that took them to Spain. Puebla, located on the main road between Mexico City and the port of Veracruz, had easy access to Chinese porcelain to use as inspiration.

But potters in Puebla did not just slavishly copy Chinese designs; they combined the Chinese blue-and-white palette with motifs drawn from Chinese, Middle Eastern, Spanish and American design to create something new and uniquely Mexican. This jar is a typical example of this cross-cultural combination; its shape comes from a Chinese guan, a bulbous covered jar, and painted on the side is a long-tailed quetzal, a Mexican bird that was important in Aztec mythology and is still a symbol of Mexico. The blue-and-white palette is Chinese, while the tin-glazed earthenware technology is Middle Eastern and European.

This jar was most likely a chocolatero, a vessel used to store cacao beans which was often fitted with a lockable, metal cover. Chocolate is native to Mexico and was long prized by Native Americans. They introduced it to the Spanish, who introduced it to Europe, where it became a popular beverage.

This jar has had a hard life; at some point, the neck was broken off (it’s possible that the heavy metal and cover broke off at the same time). Later, a hole was drilled through its base to thread a cord to make the jar into a lamp. Stripped of these later additions, it now survives as a fragment of a rare form that reflects the global influence of Chinese porcelain and a thriving Mexican industry.

The jar is now on display in the Atrium of the Reeves Center.