A General Abroad As a diplomat with the U.S. State Department, Roshni Nirody ’00 has traveled the world. 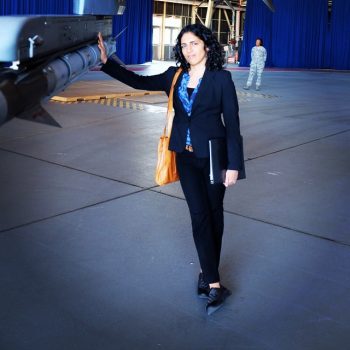 In the tradition of her nomadic ancestors, Roshni Nirody ’00 has been following a life and career that is taking her around the world.

“It intrigued me how generations of my father’s family lived with no written records. How did they stay in constant motion and survive?” Her great-grandfather, born in central Asia, her grandfather, born in Burma, and her father, born in India, seem to have passed on to Nirody an innate curiosity to keep moving and see what is out there beyond the next river, ocean or mountain.

Since 2006, she has worked for the U.S. Department of State, where she is currently stationed as political chief at the embassy in Lisbon, Portugal. And while she has moved around with State — from India to Iraq and Japan — Nirody had an itch for travel even earlier in her life.

A Thomas J. Watson Foundation fellowship allowed her to study the nomadic tribes in Mexico, Thailand, India, Burma, China and Ireland. She biked from the U.S.-Mexico border to Guatemala, studying four tribes along the way and conducting research and helping design small-scale economic development projects.

While earning a master’s degree at Cornell University, Nirody traveled to Brazil on a graduate research fellowship. There, she worked on efforts to improve an education development project, “Goat to School,” aimed at eliminating malnutrition and raising literacy rates among child workers in rural areas of the country.

After accompanying a friend who was taking a written exam for employment at the State Department, she took the test herself and passed. She went on to take the oral exam and was offered a job. “I thought I’d last a year. It has been amazing,” she said of her nearly 16 years with the department.

In Japan, she met the new ambassador, Caroline Kennedy, on an elevator. It wasn’t long before Kennedy asked her to become her special advisor. Kennedy, she said, was “curious, athletic and understood how policy issues manifested in people’s lives.” The two rode bicycles along the coast of northern Japan to view damage from the tsunami, and Nirody was by her side while she gave speeches in 42 of the 47 prefectures in the country.

As a diplomat, Nirody says she has a three-part role: following guidance from Washington, such as relaying important messages; negotiating to solve problems while not threatening bilateral relationships; and providing support to visitors, especially Congressional delegations, to the embassy. For the latter role, she received the William R. Rivkin Award for Constructive Dissent from the American Foreign Service Association. The organization cited her ideas for strategically taking advantage of Congressional visits to engage with Congress, shape the visits and leave a lasting impression.

Nirody and her family will be uprooted again soon, as she has received a one-year assignment in D.C., and will then become the political-economic chief at the U.S. embassy in Indonesia.