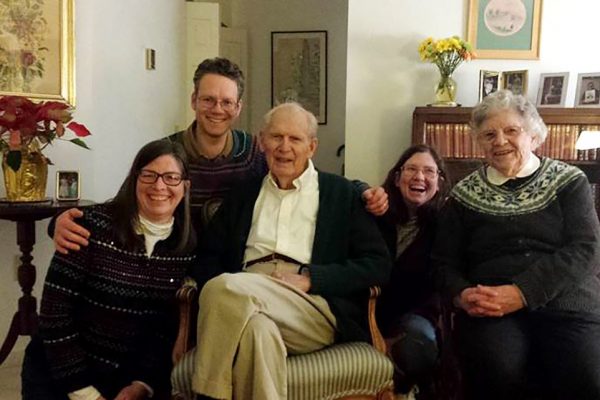 “Sidney Coulling represents all that is best and most admirable in the W&L professor.”

“As a scholar you rarely accrue wealth, but you are enriched in other ways,” observed Mary Coulling, the widow of Professor Sidney Coulling ’46, who taught in the English Department for 35 years.  Professor Coulling graduated from W&L in 1948 on the GI Bill after serving in World War II. After completing his doctorate, he returned to campus to teach in 1956, where he met Mary who was working in W&L’s first development office.

“The post-war years were lean times, but the very best of times,” she reflectd. “The university was not wealthy, but it was a congenial place to be and a comfortable atmosphere in which to work and raise a family.” The Coullings lived in subsidized housing for six years on campus, then were able to purchase their own home with W&L’s generous mortgage program. All three of their children enjoyed the college’s tuition subsidy, which enabled them to attend the colleges of their choice.

“W&L’s health plan, far more helpful than that of many colleges at the time, provided us with wonderful coverage as long as Sidney was teaching and until our children graduated from college,” she continued. “When Sidney was so sick in the winter of 1961, the insurance benefit provided him with his full salary until he could return to work in the fall of 1962. All these benefits added up financially in an extraordinary way.”

The family also benefited from the less tangible advantages the campus provides. “My three children wanted me to express how growing up on and near the college, feeling the rhythm of the academic year, getting to know faculty as friends and parents of their friends, and being able to use the university library prepared them well for their own college and work experiences.” Mary herself profited from the W&L Library and archives when writing her two books, “The Lee Girls” and “Margaret Junkin Preston: A Biography.”

Sidney Coulling retired in 1992 after an extraordinary career. Among his many honors, he received the Outstanding Faculty Award from the State Council of Higher Education in Virginia in 1989. In another recognition of his influence, in 1986 William C. Porth, the parent of a W&L student, established the Sidney M. B. Coulling Prize in English, given annually to a first-year or sophomore for the best essay on a literary topic. In 1993, the Sidney M. B. Coulling Scholarship Endowment was established by the estate of Mary Esther Streng at the behest of another alumnus.

“When Sidney died two years ago, a number of gifts came in that augmented the scholarship. I wanted to do something for the university that had done so much for us,” continued Mary Coulling. “We’re not wealthy, in the league of Mrs. duPont or Mrs.  Lettie Pate Evans, but, when I reached 90, I received a notice that I had to cash in an annuity I had purchased many years ago. I also had a particular stock that I was no longer able to sell because of the huge capital gains. I was able to cash the annuity and offset it by transferring the stock to W&L.” Her gift will increase the scholarship to pay for half of the tuition for a student interested in majoring in English.

“Sidney Coulling represents all that is best and most admirable in the W&L professor,” observed provost Marc Conner. “His dedication to our students, his friendliness to every colleague and staff member on our campus, and his courteous and generous conduct are legendary. He is the standard by which the W&L professor is measured. The students who are supported by the Sidney Coulling scholarship know that they are honored by the name of one of our most admirable faculty.”