A Leap of Faith Ollie Cook '60 and wife, Sharon, discover the rewards of adopting a senior dog. 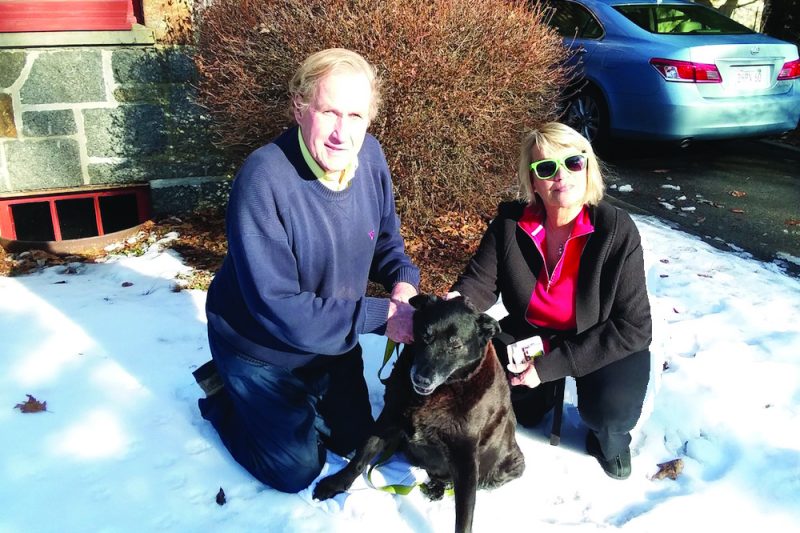 Maybe you can’t teach an old dog new tricks, but you can certainly give it a wonderful new life. Even better, an old dog can contribute much to your happiness. Just ask Ollie Cook ’60.

Cook is an attorney in Beverly Farms, Massachusetts. He grew up in Ohio in an animal-loving household, and he and his wife, Sharon, an author of mystery novels, have adopted many pets over the years. However, after their black Labs, Chester and Tubbs, died, six years elapsed before they realized how much they missed canine companionship and began to look for another dog.

“We started looking around for a replacement, experiencing a few false starts, such as the Border collie who dug under our fence and ran away twice in one afternoon,” Cook said. “However, things turned when I attended a memorial service in Ipswich for Elaine, a longtime friend and client. At one point the minister asked if anyone was willing to give her 10-year-old dog a home. I raised my hand.”

Two days later, Cook brought home Samson, a Lab/chow mix, as a surprise for Sharon. “She was speechless,” he laughed. “Eventually she and Samson became BFFs. And though he likes our two cats, Mr. Black and Chiquita, they, in turn, ignore him.”

Samson is indeed one lucky dog. He lived with his first family for eight years until they moved into a rental property that did not allow pets. He was surrendered to a local shelter, where Elaine adopted him when she was 91 and loved him for two years. He is now the light of the Cooks’ lives, getting “three walks and two squares a day,” celebrating his birthday with his favorite snack of baby carrots, and sleeping with his eyes open, which Cook admits is a little disconcerting, especially when he snores.

Cook recalls that a former rector at his church claimed that adopting a dog was a leap of faith. “He said that most likely we’d outlive our pets, yet we don’t let that fact stop us. Adopting an older dog is a huge leap of faith. For those who are on the fence, I encourage you to make that leap.”

Cook was among a dozen or so graduates of Choate who were encouraged to enter W&L by then Associate Dean James Farrar Sr. ’49. After graduating in 1960, Cook attended Boston University School of Law. He has been practicing law on the North Shore for more than 50 years, specializing in estate planning.

At W&L he was on the golf team and was social chair of Beta Theta Pi. He says he will always be indebted to golf coach Cy Twombly for introducing him to the sport of handball, which Twombly said would help keep his reflexes up and his weight down. It has done both, and Cook has competed at the regional, national and international levels and continues to play several times a week.

His ties to W&L remain strong.  He stays in touch with many of his Beta brothers and attended both his 25th and 50th reunions. “I had four wonderful years and was blessed that I was at such a nice, friendly school where everyone wanted only the best for themselves and their fellow classmates.”