A Life Concerned with the World With podcasts that look inward and outward, the Younis brothers amplify their perspective as global citizens.

Since graduating from W&L Law, brothers Mohamed ’08L and Ahmed ’04L Younis have pursued careers involving government, public policy, and education. They also both host podcasts where they explore these areas, and many others.

Ahmed, an Assistant Professor of Integrated Educational Studies in the Atallah College of Educational Studies at Chapman University, has worked in government and public policy, studying U.S. relations with the middle east. Meanwhile, Mohamed, editor in chief of Gallup, provides briefings to world leaders and institutions about important research—he studies U.S. foreign policy, state stability, and relations between Muslim communities and western societies.

These interests often provide the subject matter of their podcasts, but they also discuss religion, intentional living, identity, and more. For example, Mohamed recently uploaded to “The Gallup Podcast” a recording entitled, “How Western and Eastern Concepts of Wellbeing Differ.”

The missions of their podcasts have a similar global focus. And yet Mohamed and Ahmed’s methods are essentially inverses of each other, much like their personalities. Ahmed, runs a more informal podcast. He uses his conversations with guests on “The Study,” as a metric for understanding our surroundings.

“I try to go inward,” he said, “in an attempt to explain what’s happening in the world,” he said.

Meanwhile, Mohamed begins by looking outward, using data to indicate widespread phenomena, and then animating that data via conversations. The amount of data in the world is like a “tsunami,” Mohamed said, and it’s difficult for the individual to parse it all out, to hear the voices behind the numbers.

“Our data only matters if people are connecting with the findings,” he said. “We’re giving a voice to people who are often spoken of, but not heard from.”

However different their investigative methods may be, the relationship of the individual to the world and world events is a fascination that Ahmed and Mohamed share. It’s a fascination that lends itself particularly well to podcasts, where overwhelming global or otherwise far-flung events can show themselves not in statistics or marching prose—as with academic reports of newspapers—but in real voices and earnest conversation.

Mohamed and Ahmed’s interest in America and how it fits into the international landscape was a by-product of their upbringing.

The Younis brothers in their younger days.

As kids, they moved to three different countries in a span of five years—from southern California, to Cairo, to Saudi Arabia and back again to California.

“We fundamentally see the world as Americans who are global citizens,” Ahmed said.

Both Ahmed and Mohamed also said that, as young people, this global focus was solidified by September 11.

“After 9/11 happened, all of those issues were front and center, prime time news,” Mohamed said.  “I was planning on going to med school, and when I saw the need for some kind of knowledge and understanding—I almost felt like I would be a punk not to step up,” he explained. “So I started thinking about going to law school.”

For Ahmed, 9/11 coincided with his first few weeks as a student at W&L Law.

“It just so happened that the week before I had given a speech about Islam at a professor’s church,” he said.

Ahmed had arrived in Lexington from Cuba where he had been on an exchange program. He called Lexington “a completely different world.”

“I had never seen a deer! I had never seen snow!” he said. His experience was positive and welcoming, however, despite the small, rural nature of the town and its dearth of diversity, especially in the early 2000s.

“Lexington is a very, very beautiful place of beautiful human beings,” he said. “There has to be some mercy in the process of change there.”

Both Ahmed and Mohamed said that law school was invaluable for them; they learned to look at an issue from many different angles, a feat which they strive to accomplish in their podcasts.

“I’m always looking for voices that are non-ideological and more analytical,” Mohamed said. “[People] who can look at things analytically from two different sides…that’s something that we learned in law school.”

Before entering academia, Ahmed served in the Obama and Trump administrations as Principal Deputy Assistant Secretary of State and Deputy Special Envoy. He was named one of the 500 Most Influential Muslims globally, and in 2011 and 2012, Arabian Business Magazine named him one of the “Power 500” of the Arab world and one of the 500 Most Famous Arabs in the world.

Mohamed rose through the ranks at Gallup to become editor-in-chief of the news team. In that job, Mohamed provides briefings to world leaders and institutions about important research. His areas of expertise surround U.S. foreign policy, state stability, youth employment challenges, and relations between Muslim communities and Western societies. Since 2012, he has led Gallup’s initiatives on situational intelligence and open source monitoring.

“It’s really historic,” Ahmed said, speaking of his brother—a person of color and a top executive in an important D.C. based company. 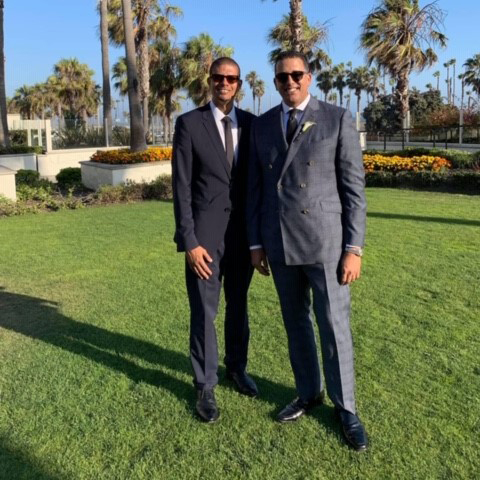 Their relationship as brothers underpins all of their professional conversations and research; they are always in conversation, Ahmed said, always sharing their different approaches to life and intellectual topics. In doing so, they enrich their overall understanding.

Mohamed called Ahmed the interdisciplinary thinker and performer in the pair.

“Ahmed is the fire in our circle. He’s always been somebody who is really gifted in inspiring people, in leading people, in bringing in the artistic.”

“We are very, very similar,” Ahmed laughed. “And very different.”

They’ve chosen a public life, “a life that is concerned with the world,” Mohamed said.