“What’s interesting about all these records is it goes beyond accounting. I think historians in a variety of disciplines would find it interesting.” 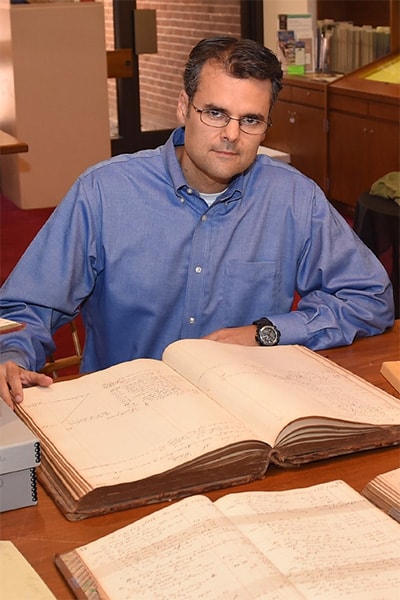 In 2014, a Washington and Lee University Spring Term class learned that historic account ledgers can reveal a wealth of information about not only businesses, but also the communities they served. This summer, accounting professor Stephan Fafatas, who won an award for that 2014 class from the Academy of Accounting Historians, is again delving into W&L’s Special Collections.

During the time Fafatas has spent this summer surrounded by yellowed papers and books in Leyburn Library, his focus has been on a company with strong ties to the university: the James River and Kanawha Canal Company. In 1796, Washington and Lee’s predecessor, Liberty Hall Academy, was on the brink of financial ruin when George Washington saved it with a gift of $20,000 in James River Canal stock. The trustees were so grateful that they changed the name of the school to Washington Academy.

The canal company was chartered in 1785 to fulfill Washington’s vision of a navigable waterway that would connect the James and Kanawha rivers. The canal, which opened in 1790, eventually stretched from Buchanan to Richmond. It was instrumental in the transportation of goods across the state before railroads moved in and diminished its relevance. Floods and war also contributed to the canal company’s downfall.

As Fafatas sorts through the company’s records, he is looking for connections to the university and also analyzing the methods and reasoning for the canal company’s financial reporting. For example, if no organization like today’s Securities and Exchange Commission existed to regulate the reporting of corporations, what compelled the company to share information? Was it spurred by interest from shareholders like Washington Academy? Why did the canal company have external audits done if that was not a requirement from an outside authority?

“My interest is in, from an accounting standpoint, what do we see changing? How is it evolving over time? And is there a catalyst for the change?” Fafatas said.

Fafatas has noticed that the canal company at some point began to itemize the goods it was transporting — commodities such as coal and grains and tobacco. He can compare these itemized lists across the years to spot changes in the variety and amount of goods transported. The company also began to list more descriptive toll-rate statistics. A sharp decrease in toll rates is seen in the data presented for the 1840s and 1850s, a period that coincides with added competition from railroads.
In those ways, the records can paint a picture of how other industries were performing at the time. Fafatas said he will likely compare some railroad transportation records with those of the James River and Kanawha Canal Company.

“I think what’s interesting about all these records is it goes beyond accounting,” he said. “I think historians in a variety of disciplines would find it interesting.”

In August, Fafatas attended an accounting historians workshop as part of the annual conference of the American Accounting Association, and discussed his preliminary findings and observations with other researchers interested in the development of financial reporting in the U.S. Eventually, he hopes to get students involved in the project.

For now, Fafatas has only begun to peel back the layers of information about the canal company. He has yet to examine everything in W&L’s Special Collections and plans to check other libraries for additional pieces, but he’s grateful for the significant start he’s gotten at W&L.

“I like the idea of using our materials,” he said. “We are a small school, but we have a really good collection.”