AIM Summer Program Doubles in Size Forty incoming first-year students participated in this year’s virtual Advanced Immersion and Mentoring (AIM) Scholars Summer Program, giving them an auspicious start to their W&L careers and a chance to help their peers this fall. 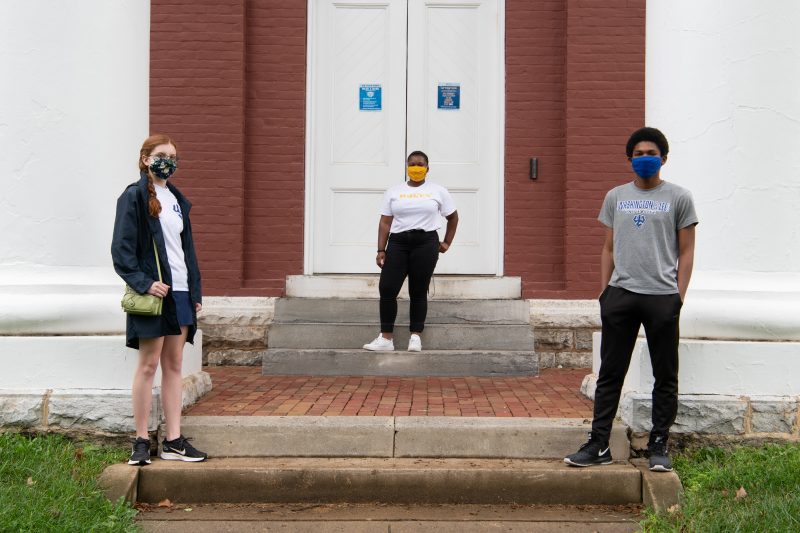 Arden Floyd, Naija Barakat and Josh Lewis, all class of 2024, participated in AIM over the summer of 2020.

“Not only was I able to network and connect with new friends and mentors, but I was also able to confidently step foot on Washington and Lee’s campus fully aware of the many support structures in place.”

Washington and Lee University’s Advanced Immersion and Mentoring (AIM) Scholars Summer Program went virtual in 2020, doubling in size and providing 40 students with a promising start to their college careers. Over a week in July, the students met with administrators, upper-division mentors and faculty to learn about resources at W&L and explore leadership opportunities on campus.

AIM began in 2016 as the Advanced Research Cohort (ARC), a pilot initiative aimed at expanding diversity among STEM majors at W&L. The program paired incoming students with peer and faculty mentors, whom they worked alongside for five weeks while assisting a professor with a research project. ARC proved so successful that W&L made expanding it a key element of its 10-year Quality Enhancement Plan in 2018. That effort is now in its second year, and growing.

“Rather than the emphasis being on STEM, it’s on the undergraduate experience as a whole,” said Helen I’Anson, John T. Perry Jr. Professor of Biology and Research Science and co-director of AIM alongside Associate Dean of Students Megan Hobbs. “In the end, our goal is to build community.”

AIM features three main components. First, AIM Scholars take part in a paid, immersive summer program that introduces them to faculty, administrators, upper-division student mentors and one another. Then they enroll in the First-Year Experience, a semester-long course open to any first-year that aims to deepen students’ sense of belonging, help them choose a direction for their undergraduate years and build leadership skills. Finally, students are paired with a faculty adviser who knows them from the summer program, creating a close mentorship they can draw on as they plan their academic trajectory. This third AIM component also offers educational opportunities for faculty and staff to buttress their skills in holistic advising and mentoring for student success.

This summer, AIM’s on-campus program was canceled because of COVID-19. But despite their initial disappointment, the program’s facilitators realized they could hold something virtually.

“At first we were really depressed, thinking we wouldn’t be able to do anything,” I’Anson said. Students had already applied to the program, and there were many strong candidates. They didn’t want to turn them away. “And we thought, ‘Well, okay, what else? What can we do?’”

They narrowed the goals for the summer experience: introduce students to key people at the university, make sure they knew about important resources, and find them good faculty advisers. I’Anson and Hobbs, in touch with advisees and previous AIM and ARC participants, knew that many students would not be able to participate full-time because of work and family commitments. Experiences with Zoom fatigue from virtual instruction factored in their planning as well. The team settled on a week of half-day programming.

“We were trying to be really cognizant of not having the students become fatigued,” said Assistant Director of Leadership Development and Student Engagement Leah Beard, who built the day-to-day schedule. “We agreed there would be no more than three sessions a day and sessions could last for a maximum of 90 minutes. The scholars had at least 30 minutes between sessions.”

The AIM Summer Scholars program is designed to be friendly to students regardless of their family resources. This year, it included a $400 stipend to cover a week missed from summer jobs, and its short, intense nature was intended to keep it accessible to students with responsibilities like providing summer child care for younger siblings.

The virtual program was flexible enough to accommodate all 40 students who applied, an exciting milestone for Beard and I’Anson. “It was one of the first times during the pandemic where I felt hopeful and optimistic,” Beard said. “Seeing the excitement and interest from the scholars helped motivate me to reinvent the program from scratch, and make it the absolute best it could be for them.”

To better facilitate the small-group interactions that distinguish the program, students were split into two cohorts for most of the week. Programming typically took place in the afternoon or early evening. While everyone took part in a few sessions with administrators, the scholars followed their preferences to faculty panels about areas of academic focus — STEM, the humanities, business, the health professions, and others. Panels were recorded so students could watch them later if they had schedule conflicts.

Over the week, the students developed a sense of camaraderie and community. “It was really cool,” said Beard, who co-led a final student feedback session with I’Anson. “I mean, they all changed their last name on Zoom because of an inside joke that someone’s great-grandmother was going to adopt everyone.”

The 2020 AIM scholars are now applying their experience on campus — meeting with advisers, choosing courses, contributing to discussions and diving into university life. “My time in the AIM Summer Scholars Program was truly one of the highlights of my summer,” said scholar P.T. Meadors ’24. “While I had hoped to be on campus to participate in research, the online program exceeded my expectations. Not only was I able to network and connect with new friends and mentors, but I was also able to confidently step foot on Washington and Lee’s campus fully aware of the many support structures in place.”

Jillian Gallardo ’23 and Enuma Anekwe-Desince ’22, AIM’s peer mentors, watched that growth happen. “From the minute we created the AIM GroupMe, Jillian and I witnessed the students bond over shared interests, encourage one another, and find ways to aid each other,” Anekwe-Desince said.

Gallardo added, “AIM really opened the door for the possibility of connection in a time when connection can be difficult. I’ve loved seeing the AIM participants around campus and watching their friendships develop in person. I’m so glad that we all recognize each other from Zoom, even while wearing masks!”

And while taking the program virtual was a hurdle, Hobbs, I’Anson and Beard all believe it has given them an important new tool, and a chance to broaden AIM’s reach in the future.

“The virtual program originally existed as a one-off,” I’Anson said. “But it’s gone so well that we’ve been thinking it might be possible to grow it.”