A Production for Peace "A Towering Task": Documenting the History of the Peace Corps 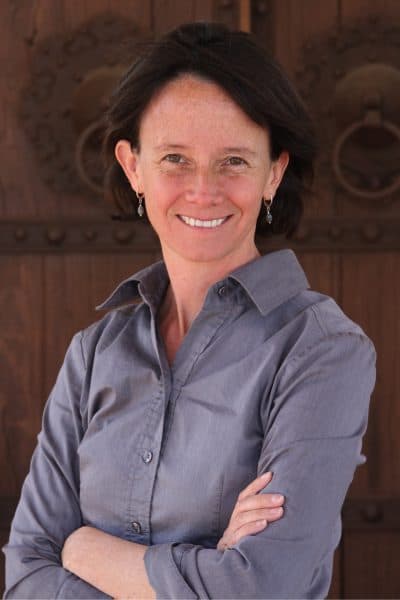 “As I have dug into the film, I realized the crucial nature and awesome responsibility of getting the story right. I hope the film will influence our American discourse and help us consider peace as a worthwhile discussion.”

Filmmaker Alana DeJoseph ’92 is about halfway through producing a documentary about the Peace Corps. A former Peace Corps volunteer in Mali, Africa, she is fulfilling a dream that took root in a letter she sent to Peace Corp administrators more than two decades ago.

In the letter, written after leaving Mali, she suggested that the Peace Corps produce a “big picture” film about the organization, founded during the John Kennedy administration. To date, the organization has never been fully documented, other than a few films focused on individual volunteers.

“As I have dug into the film, I realized the crucial nature and awesome responsibility of getting the story right,” she said. “I hope the film will influence our American discourse and help us consider peace as a worthwhile discussion.”

DeJoseph expects the film, “A Towering Task,” to be shown on public television stations, at film festivals, and in communities with accompanying panel discussions. It might also be streamed through online sites, and she will offer lesson plans for college and university professors.

DeJoseph began working in film long before she suggested the idea to the Peace Corps or opened her own production company in Denver. As a 10-year-old in her hometown of Munich, Germany, she auditioned for and won one of three voice-over spots for movie studios based in the city. For about nine years, she worked as a voice-over, stage and film actor.

She eventually realized that she enjoyed the management and planning side of movie-making more than acting. When her American father suggested that she consider attending college in the U.S., DeJoseph researched a variety of universities, settling on Washington and Lee University. “It had the quality of an Ivy League university with a personal touch,” she said.

At W&L, she was able to combine her love for both theater and business with a double major. Professor Michael Gorman even created a theater management course for her — she was the only student. During the semester, she wrote a business plan for a fictitious theater in Seattle, Washington.

At W&L, she continued her on-stage work in student productions, also branching out as a director and stage manager. She credits Professor Joseph Martinez, who taught directing, as an inspiration. Her theater life “was all encompassing,” but she learned the art of coordinating many details while keeping the grand vision. “It was a huge lesson that comes back on a daily basis,” she said.

Dominican girls watching themselves on the field monitor as they are being filmed. Manabao, Dominican Republic.

On the business side, economics professors Michael Anderson and Lyn Wheeler were influential. “All of my professors encouraged me to push myself and learn skills that helped me be tenacious and see projects to the end.”

Anderson’s class, “Food, Population and Poverty,” sparked her interest in joining the Peace Corps. A guest speaker from the Ford Foundation so inspired her that she contacted him later in New York City asking about a job with the foundation. He encouraged her to first volunteer with the Peace Corps.

After a year of waiting, she was assigned to Mali. “I packed my limited luggage and embarked to a continent I’d never been to before to help entrepreneurs develop small businesses,” she said. “It was challenging to adapt to a society where much of the time accounting was done in the head and not in books.”

In a village of 1,000 people who lived in mud huts with straw roofs, DeJoseph thrived. Most people walked, but some were fortunate and used bikes or motorcycles to get around. One day, a young man who operated a motorcycle-repair business approached her. He needed help with his business skills, and she began to teach him accounting.

Two young girls wanted to learn about the rest of the world. With a National Geographic map nailed to the mud wall of her hut, DeJoseph began by pointing to the South. “If you keep walking in this direction, you will get to the Ivory Coast, and then to the Atlantic Ocean.” Another young man wanted to learn English so he could converse with a friend who lived in Ghana. And so the projects kept coming.

Following her Peace Corps assignment, DeJoseph and her husband, whom she had met while they were both in Peace Corps training, took an around-the-world backpacking trip. When they returned, she was hooked on finding important stories to tell.

She became associate producer for several U.S. Forest Service productions, including “The Greatest Good,” celebrating the centennial of the service, and “Green Fire,” the story of Aldo Leopold, known as the “father of conservation.” Both documentaries were featured at numerous film festivals, and both won awards, including an Emmy for “Green Fire.” While screening “Green Fire” in California, she met several Peace Corps alumni, who encouraged her to develop her idea of a Peace Corps documentary.

“It was important to find people passionate about the story. We are losing many of the original voices,” she said. The story is “urgent on so many levels. It is a story poorly understood by the public.”

The mother of two children — a son, 11, and daughter, 8 — DeJoseph tries to balance her professional and private lives in order to be successful in each. Her children have already voiced their desire to join the Peace Corps someday, underscoring her desire to keep the conversation about peace going for the benefit of younger generations.

DeJoseph says more Peace Corps documentaries could be in her future. Because the institutional memory within the organization is not strong, she sees documentaries forming the history of one of the great peace undertakings of our time.

“The Peace Corps is in 141 countries. What’s next could be spin-offs of amazing stories in each country.”