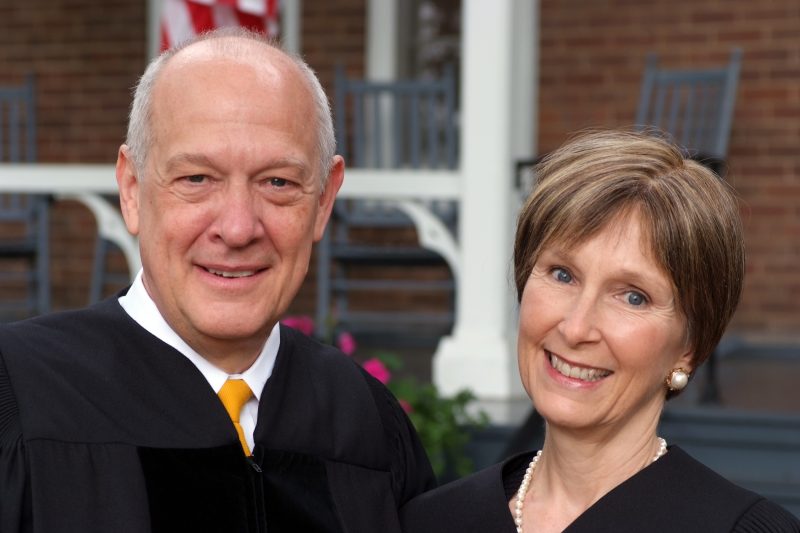 “It gives me genuine peace of mind to be doing this,” Jones said. “I am grateful to W&L and wanted to try to repay a bit of what it has given me.”

Jones won his Pulitzer at The New York Times for coverage of the media, and in 2015 he stepped down after 15 years as director of the Shorenstein Center on Media, Politics and Public Policy at the Kennedy School of Government at Harvard. He was the founding host of National Public Radio’s “On The Media,” executive editor of PBS’s Media Matters, and a member of a four-generation newspaper family from Greeneville, Tennessee.

His books include “Losing the News: The Future of the News that Feeds Democracy” (2009), which was prescient in its analysis of looming challenges to quality journalism. He co-authored with his late wife Susan E. Tifft two notable books on journalism dynasties, “The Patriarch: The Rise and Fall of the Bingham Dynasty” (1991) and “The Trust: The Private and Powerful Family Behind The New York Times” (1999), which was a National Book Critics Circle Award finalist. He and Tifft, who was a writer and associate editor at TIME Magazine, also shared a joint position as the Eugene C. Patterson Professor of the Practice of Journalism at Duke University. Washington and Lee awarded them honorary doctorates of humane letters in 2009.

“Washington and Lee paid us a great compliment. It was very touching for both of us to be presented with our honorary degrees by Ken Ruscio,” Jones recalls. “W&L seemed to be a fitting place for a tribute to my wife, who was a superb journalist and a terrific teacher at Duke University. Both of us realized how difficult it is for aspiring journalists to get the hands-on, practical, real-world experience necessary at the beginning of a career. Paid internships have all but disappeared, but the experience they provide is invaluable for launching young journalists on their career path. My wife and I shared an interest in supporting the education — both theoretical and practical — of budding journalists.”

“The internships are for journalism and only for journalism,” continues Jones. “This is a time when crying ‘fake news’ is a scoundrel’s reaction to legitimate reporting. It is also a time of schemes to spread calculatedly phony news to manipulate the public. So it is more important than ever for journalists to fight the good fight and tell it like it is, without fear or favor. That is the mission these internships are intended to support.” 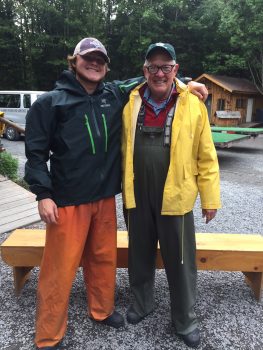 Alex Jones ’68 with his nephew, Will Floyd.

Surprisingly, given his family background, Jones did not major in journalism at W&L. “My first job was working the back shop of the newspaper hauling pig iron,” remembers Jones. After graduation from Episcopal High School, Jones admits he was “in flight from journalism.” “I was looking for an independent path and wanted to take advantage of all that liberal arts had to offer, so I majored in history. I regret now that I didn’t take some journalism courses; ironically journalism is probably one of the majors that really requires a broad liberal arts grounding. But I wanted to make my own way.”

“I loved being at W&L,” he says. “Some of my closest friendships were made there. I had a wonderful experience, which I cherish.” Jones recalls a sudden flash of deep panic one balmy April day of his junior year when he realized, “Oh my God, in another year they’re going to make me leave here!” He continues, “I arrived at W&L at 17 and received a good education in the traditional sense, but it also gave me an opportunity to grow up.”

Both Jones and his late father, John M. Jones III ’37, were named Distinguished Alumni of Washington and Lee, and his father – then in his mid-90s — was present when Jones received the award in 2008. “As I have gotten older I have come to realize what an incredible luxury it is to not have any other responsibility than to learn. To be in a place where your job is to learn, that’s a pretty extraordinary gift, which I am fortunate enough to be able to share with others,” Jones observes. In this spirit, and to honor his upcoming 50th reunion, he is also contributing to the Class of ’68 Scholarship Fund through a bequest; the 50th reunion is the only time a planned gift counts toward reunion giving.

Jones believes it is crucial that W&L continues to become more diverse and inclusive. “I want to make sure the funds I provide encourage and make the same educational experience possible for young people who might not otherwise have the opportunity to come to W&L. It is hugely important for the university to continue to strive for diversity. There was hardly a single person of color — and no women, of course — when I went to the school. I am a great believer in the traditions and the qualities of which W&L is proud, but the university should reflect the diversity of the greater nation of which it is a part.”

Bequests and Planned Gifts
For more information on bequests and planned gifts to benefit Washington and Lee University, please contact Margie Lippard in the W&L Office of Gift Planning at 540-458-8902 or mlippard@wlu.edu or visit the Gift Planning page on the W&L website.

For more information on bequests and planned gifts to benefit Washington and Lee University, please contact Margie Lippard in the W&L Office of Gift Planning at 540-458-8902 or mlippard@wlu.edu or visit the Gift Planning page on the W&L website.