Alumna Shares Coronavirus Story Kaylee Hartung '07, a graduate of the W&L journalism program, contracted the virus that causes COVID-19 while covering the outbreak in Washington State 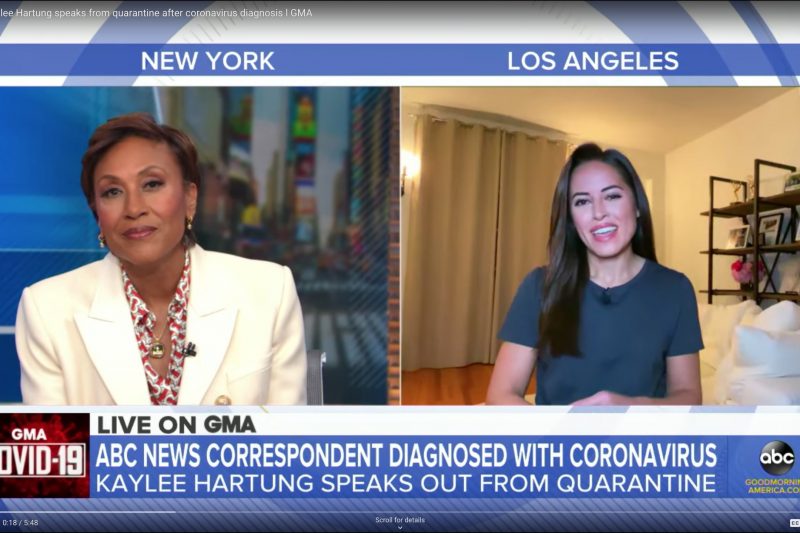 “If everyone who could took this lockdown seriously, we could get past this so much faster. By the time you have the symptoms, it’s too late. You’re already capable of spreading the virus.”

When she developed a runny nose and congestion one morning earlier this month, ABC News correspondent Kaylee Hartung ’07 thought it was nothing more than allergies.

The next day, she awakened with what she would later describe as “an undeniably weird feeling all over.” Her symptoms included exhaustion, a bad headache right between her eyes, body aches that she’d never experienced, chills and a fever.

That’s when she consulted health care professionals. She was initially told that she would not be tested for COVID-19 because her symptoms were mild, but doctors soon reversed course because she had spent the previous week reporting on the coronavirus outbreak from Seattle.

Once the test came back positive, Hartung suddenly became part of the story she’d been covering. On March 18, she appeared live on ABC’s “Good Morning America” from isolation in her Los Angeles home to discuss her experience with anchor Robin Roberts.

By then, the worst of her symptoms had passed, even though she admitted that “it knocked me off my feet for a day.”

Hartung’s reports from Seattle were featured on both “World News Tonight” and “Good Morning America” and included several segments from the Life Care Center in Kirkland, which became the epicenter for the coronavirus in hard-hit Washington state.

In the GMA interview and subsequent Instagram posts, Hartung elaborated on her symptoms, saying that she hadn’t suffered from those most closely associated with COVID-19, such as a dry cough, shortness of breath and chest pressure. She also answered questions from her followers and posted a short video in which she describes her situation and implores viewers to take social distancing seriously.

“I hope I can be a reality check for some folks out there who are having these mild symptoms,” she told Roberts. “We ought to be listening to our bodies. There are no coincidences right now. I empathize with so many people in my position who have these mild symptoms who aren’t experiencing something so severe you need hospitalization or even require special care. I empathize with you completely.”

Hartung confessed to feeling somewhat guilty about getting one of the test kits since they were in such short supply, particularly when she was tested. “If the doctors had not suggested it, I wouldn’t have gotten tested,” Hartung later wrote on her Instagram account.

Once she was confirmed as a COVID-19 case, Hartung said the advice she received was similar to what she’s been told when she had the flu: rest, hydrate and, especially in this case, isolate. On her Instagram account, she said that she’s taken Tylenol for the headaches and Nyquil for the cold symptoms and congestion, which have come and gone—and come again. She also described the diagnostic test as unpleasant, but quick. “You’re swabbed up both nostrils twice. That’s the most uncomfortable part. It’s a very strange sensation,” she wrote on Instagram. “Then your throat is swabbed.”

She said that six days after the worst symptoms, she was feeling fairly normal again with lingering congestion, and she was “a little crazy from being isolated.”

But Hartung emphasized how critical it is to heed the warnings of social distancing.

“If everyone who could took this lockdown seriously, we could get past this so much faster,” she said on GMA. “By the time you have the symptoms, it’s too late. You’re already capable of spreading the virus. I had to make uncomfortable phone calls to friends and colleagues with whom I’d come in contact after I’d come back from Seattle when I was not feeling symptomatic.”

Hartung said she had no idea exactly when she caught the virus, but she was clearly on the front lines of the epidemic in Kirkland.

During her reports, she conducted extensive interviews with family members of Life Care Center residents and did standup reports in front of the facility. On March 7, she posted an Instagram photo of the four other members of the ABC team who covered the story with her and included this message:

“We’ve all been impacted by the stories shared with us this week — Families who chose to put their loved ones in Life Care Center and now feel helpless as this deadly virus attacks this vulnerable community. A week after the outbreak began, these families are still waiting for answers, waiting for tests and too many are planning funerals. We tried so hard to give their stories a megaphone so that people around the country could put faces to the numbers of #coronavirus.”

Hartung was back on ABC on March 23, still reporting from the makeshift studio in her apartment. She discussed her own situation but also produced a report for “World News Tonight” with David Muir about young people at risk.

In the interview, Hartung said that she had been feeling like her old self for the past four days, but she didn’t know when she would able to leave her apartment.

“I feel a little trapped in some form of purgatory, but I don’t see any reason to put anybody else at risk when, in reality, all of us should be hunkering down at home as much as we possibly can,” she said. “So I’m staying put for a while longer.”

Hartung joined ABC in July 2019 and was originally based in New York. She is no stranger to challenging assignments. As a CNN reporter, she covered the violence in Charlottesville in the summer of 2017 when a white nationalist drove into a crowd and killed Heather Heyer. She returned a year later to interview Heyer’s mother. She also covered the shootings at both Stoneman Douglas High School in Parkland, Florida, and at the First Baptist Church in Sutherland Springs, Texas, and has reported on both hurricanes and wildfires in recent years.

Immediately after graduating from W&L with a degree in journalism and mass communication, she worked at CBS-TV in Washington, then spent several years at ESPN and the SEC Network before moving to CNN.

UPDATE: Kaylee has recovered from COVID-19 and was able to donate plasma to help a man who was critically ill with the disease. See her meet the man for the first time in this “Good Morning America” story.