An Epic Project The 2016 Mednick Fellowship from the Virginia Foundation for Independent Colleges will help W&L professor Stephen P. McCormick translate and digitize a romance epic called the "Huon d'Auvergne." 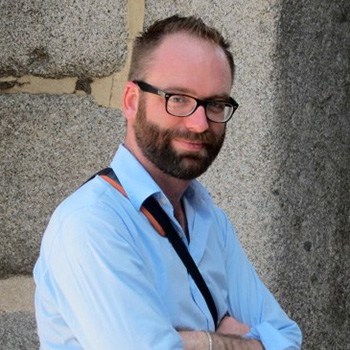 The 2016 Mednick Fellowship from the Virginia Foundation for Independent Colleges (VFIC) has been awarded to Stephen P. McCormick, assistant professor of French and Italian at Washington and Lee University.

The award will fund the continuation of a collaborative digital humanities project that aims to translate and digitize an important yet largely unknown work of pre-modern literature, the “Huon d’Auvergne.” The romance-epic, existing in four distinct manuscript witnesses, is one of the first works to reference Dante’s “Divine Comedy,” but because it was written in Franco-Italian, a complicated hybrid literary language, it has not been easily accessible to scholars.

McCormick, who is currently teaching a Spring Term Abroad course in Toulouse, France, wrote in an email that it is a great honor to receive the Mednick award.

“I love my work, and I love medieval literature, so most of all this recognition is great to get the word out that medieval literature is relevant and worth studying,” he wrote. “It’s a great feeling to know that a project in medieval studies has been selected.”

The award money will allow McCormick to travel this summer to libraries and archives in Italy that house three of the four surviving manuscripts of the Huon d’Auvergne epic: the Biblioteca del seminario vescovile in Padua; the Biblioteca nazionale in Turin; and the Biblioteca dell’Archiginnasio in Bologna.

In a letter recommending McCormick for the award, Suzanne Keen, dean of The College at W&L, praised the professor for working with W&L undergraduate students and the Digital Humanities Action Team in a way that emphasizes the university’s teacher-scholar model. She also underlined the importance of his project.

“Professor McCormick’s endeavor is both traditional, in the sense that this scholarly editorial work undertakes fundamental literary recovery of a text,” Keen wrote, “and also quite contemporary, for he employs a digital humanities toolkit to create an edition that will be accessible to the public on a web-based platform.”

Read on to learn more about McCormick’s fascinating work on the “Huon d’Auvergne.”

Q: When and how did you first come across the “Huon d’Auvergne”?

I first encountered the “Huon d’Auvergne” romance-epic when I was still a graduate student. I was studying in Padua, Italy, for the year, and a professor at the university there suggested I take a look at it. There are not many people who are currently working on the text — 6 to 10 that I know of. The fact that it was a little-studied document, and its importance in Italian literary history, were reasons I was drawn to it.

Q: Why do you find the work so fascinating and important?

The “Huon d’Auvergne” romance-epic first appealed to me from a linguistic point of view: It is composed in a mix of Old French, Venetian/Padua, Tuscan, and Latin, a mix today called “Franco-Italian.” This was not a spoken language, but rather a highly variable written language used between the 13th and mid-15th centuries to tell stories related to the Charlemagne cycle of medieval epic, stories about Roland, Oliver, and the emperor Charlemagne. This is the same Roland as the ‘Song of Roland.’

The “Huon d’Auvergne,” however, is separate from the Charlemagne cycle and instead tells the adventures of Huon, count of Auvergne, and his journey to Hell. Here he must seek tribute from Lucifer for the emperor Carlo Martello. The thematic program was therefore another reason this text interested me; the story as it exists in the surviving manuscripts is clearly related to Dante Alighieri’s Inferno from the “Divine Comedy.” The more I study this text, the more I’m interested in it. What is perhaps the most interesting for our current project is the fact that the “Huon d’Auvergne” romance-epic survives in four manuscripts, and therefore four distinct yet related versions. It’s fascinating to try to understand how the story changes through time and in response to different audiences.

Q: Why do you suppose it has taken so long for someone to translate it or study it in depth?

There is one reason in particular this text has gone unstudied for so long: the Franco-Italian languages in which it is written. This mixed language is extremely difficult for modern audiences to read and decipher and requires a solid knowledge of French, Italian, and their medieval variants to make sense of the text. This is the case with Franco-Italian literature in general. Many of these epic texts are still unknown to the wider scholarly community.

Q: Are these hybrid languages very common in literary history?

In the context of medieval linguistic history, I would say that language functions very differently than it does today. Now we have dictionaries and grammars that have standardized the languages we use, and languages are very closely associated with national belonging (French in France, English in England, Italian in Italy, etc.). Before print technology, it was impossible to standardize languages in this same way, and for this reason, language variation was the rule and not the exception.

Also, we have many sources that tell us that the language we now call French (which was called the ‘langue d’oïl’ in the Middle Ages) was an international language, spoken and read from the southern part of the British Isles all the way to the near East. For this reason, many of the storytelling traditions in the ‘langue d’oïl’ spread throughout much of the Mediterranean basin. That’s why there are mosaics in the south of Italy that depict King Arthur and, of course, mixed-language epic manuscripts in northeastern Italy that preserve stories of Charlemagne and Roland: Franco-Italian epic.

The hybrid language called Franco-Italian, however, is different than other of medieval languages. Franco-Italian was never a spoken language and, therefore, we suspect it was a language created specifically to tell the stories of Charlemagne and Roland in northern Italy. This particular phenomenon is indeed very rare and unique.

Q: Is there any work in existence to which you could compare it?

The “Huon d’Auvergne” epic-romance, or at least the four versions that have survived, are clearly influenced by Dante’s “Divine Comedy.” So, many of the themes and narrative frameworks are used in the “Huon d’Auvergne.” Also, the “Huon” epic resembles many of the Old French epic works in theme and content. Finally, one narrative segment of one manuscript, the one conserved today in Padua, is a rewriting of the Potiphar’s wife story from Genesis 39. Many variants of this story are found in medieval literature.

Q: Any idea who wrote it? Is it believed to have been written by a single person, or multiple authors?

We have no idea who wrote the “Huon d’Auvergne.” It is anonymous and only mentions a vague and unidentifiable name “Odinel.” Consistent with most medieval literature, the author is seldom mentioned or considered important. These stories were told and retold by professional storytellers. Audiences were probably more interested in the storyteller’s interpretation than who the original person was who invented the story. In any case, it’s a question that has concerned many scholars for a long time. Unfortunately, we have no clues beyond the name Odinel, which does not correspond with any other text or literary name.

Q: Do you know the basic storyline?

The romance-epic’s eponymous hero sets out to wander the world, visiting the most famous medieval pilgrimage sites — Rome, Jerusalem, Santiago de Compostela — as well as imaginary lands that were common in medieval literature, including the lands of Prester John, an exceedingly rich Christian king whose kingdom is far away in the East, lost and severed from the main lands of Christendom.

Huon’s goal ultimately is to seek tribute from Lucifer on behalf of King Carlo Martello (who is later also identified as the emperor of Rome). Huon does not know, however, that the king sent him on this impossible task in order to gain access to the object of his lust, the lovely Ynide, Huon’s wife.

While Huon is away in search of Hell, Carlo Martello attempts to force Ynide to come to his court in Paris, but the king’s plan fails because of Ynide’s bold self-defense. The king’s elaborately concocted plot ultimately fails: Huon successfully finds Hell, receives the tribute from Lucifer, returns home magically to his castle, and Carlo Martello, when he takes the tribute, is quickly swept away to Hell by a swarm of devils.

Other protagonists include Sandino, Carlo Martello’s loyal minstrel, and Sofia, the wife of Huon’s good friend Sanguino. The story consists of six main episodes: Sofia’s betrayal; Carlo Martello’s love for Ynide; Huon’s travels through the East and his visit to the lands of Prester John; Ynide’s defense against Carlo’s amorous advances; Huon’s journey through Hell; and finally the siege of Rome. None of the four manuscripts conserves all six episodes and variation in inserted or deleted scenes give each textual witness a characteristic reading.

Q: How did you get hooked up with your project partners, Leslie Zarker Morgan of Loyola University Maryland and Shira Schwam-Baird at the University of Florida?

Leslie was one of my dissertation advisors and she sat on my Ph.D. committee. We have worked together for a long time on this project. To complete a printed edition of this text would take a lifetime and would ultimately be a futile task for one person. This is why we assembled the team. Shira was a friend and colleague of Leslie’s before the project. She translated another important text, “Valentin and Ourson,” bringing this fascinating story back into light.