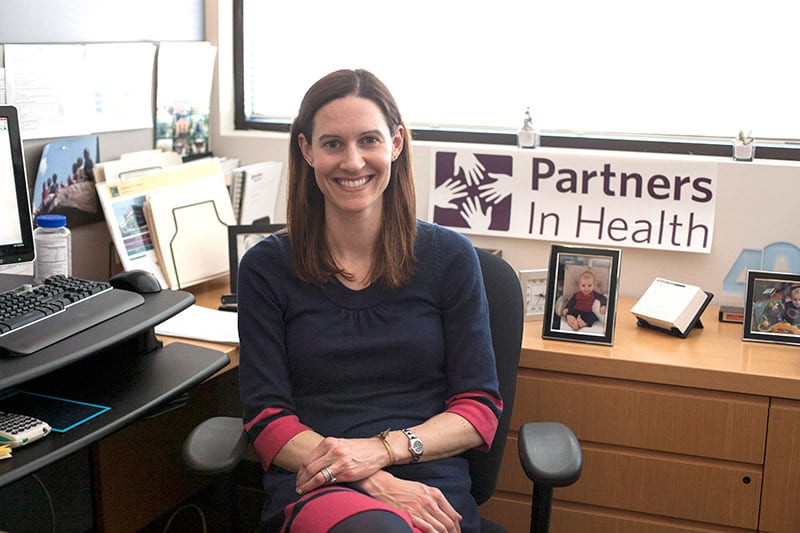 Ann Richard Quandt followed the traditional path of an economics major — a first job in investment banking, graduate study at Stanford University, and then back to investment banking. Along the way, she realized that her heart was telling her something else.

Both of her parents had endured cancer, and because of their experience, Quandt started looking for a job that would combine her love of finance with her interest in healthcare. She found it at Boston-based Partners In Health, a global healthcare nonprofit organization, offering healthcare services in some of the poorest and most rural areas of the world. The organization works in the African countries Malawi, Lesotho, Rwanda, Liberia and Sierra Leone, as well as in Haiti, Russia, Peru and Mexico, opening and running hospitals and health centers and employing community health workers — all at no charge to their patients. In the United States, PIH works in the Navajo Nation to bring health services to high-risk patients.

Working at PIH is “significantly more rewarding,” than her previous job that focused on mergers and acquisitions, said Quandt, now PIH’s chief financial officer. “I would do my job for free. I love it.”

She is proud of the “fantastic” team she has built while at PIH and says the job allows her to be a great role model for her three children, her friends and colleagues.

She began at PIH seven years ago as an international finance manager and helped train financial teams on a new accounting system she was responsible for implementing at sites around the world. As her team grew, she advanced to international finance director, then vice president of finance. A couple of years ago, she assumed the title chief financial officer. She now oversees an accounting and financial team of about 120 professionals around the world.

Her job involves substantial travel, primarily to Africa, which she visits twice a year, and Haiti, where she travels two to three times a year. Her global team tracks all the organization’s expenses around the world, from rural health centers in Haiti or Africa to the headquarters office in Boston. She says it is very important to make sure that donors’ gifts are carefully tracked and used as intended.

Quandt majored in economics at Washington and Lee and says her corporate finance class inspired her to pursue a career in the field. After graduating, she got her first job at Lincoln International in Chicago. “I could not have asked for a better job out of W&L. I had exposure to so many different industries and wonderful mentors, many of whom are still at Lincoln.”

She decided to pursue an MBA at Stanford as she was beginning to think about combining finance and healthcare. Still, after receiving her degree, she briefly went back to investment banking, all the time searching for that perfect job fit that finally came together at PIH.

Quandt was a cross country runner at W&L and still enjoys running whenever she can. Her husband, Rob, is employed in private equity and together they maintain a very busy schedule. Between their jobs and their three children, ages 5, 3 and 1, the couple has little time for other pursuits. When they find time, they enjoy traveling, tennis and golf.

Quandt believes strongly in women holding high-level positions in the workforce. First, she says, women must find a job they love and then find ways to make it work along with their other responsibilities — whether those are marriage, children, volunteer work, hobbies or other interests.

Of her own career-family balancing act, she says, it’s challenging, but “managing a team, helping to solve problems in developing countries, and thinking strategically has kept me in the workforce.”And apparently she’s doing a great job. This October, the Boston Business Journal named Ann to its 40 Under 40 list of business and civic leaders who are making a major impact in their respective fields and the civic life of the Boston area.