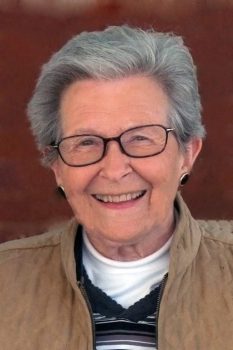 Wilson was born on Sept. 22, 1934, in Newbury, Berkshire, a small town southwest of London. Her daughter Sara noted that her mother’s “childhood memories included the agrarian England culture of gardening and animals, tranquil family trips on canal boats in rural England, foxhunting, as well as the discordant interruption of taking cover from the frightening air raids of World War II.” She attended a girls’ school outside Newbury, where she enjoyed literature, sports and occasional adventures to London and Ireland with friends.

In 1956, she met John Wilson at her father’s golf club in Newbury; he was stationed nearby as an Air Force intelligence officer. They married Sept. 21, 1957. Soon after, she left her beloved England to join him as he started his career in academic administration at Michigan State, though she forever after held on to her British identity (and accent) with great tenacity. When her husband became president of Wells College in Aurora, New York, from 1968 to 1975, she embraced the social and supportive role of a college president’s spouse with grace and a generous spirit. When the couple moved to Virginia Tech in 1975, she became active in faculty clubs, garden clubs, the arts and community groups.

At W&L, Wilson was known for her support of athletics and the arts and for her contributions in helping shepherd W&L through the challenges of co-education. Upon her departure from W&L in 1995, the Alumni Board of Directors dedicated the renovation and landscaping of Traveller’s grave (outside the Lee Chapel Museum entrance) in honor of her service to the university. “Anne Wilson,” the statement read, “is a lover of animals who believes that their company and care enhance the human condition.”

In 2006, the university dedicated the John and Anne Wilson Hall, the new home of the departments of art and art history and music, in the couple’s honor.

As well as continuing to read avidly in retirement, she also enjoyed W&L’s Alumni Trips and summer education seminars. In addition, she was a volunteer for the SPCA and the Rockbridge Area Foodbank.

Wilson is survived by her four children, Stephen, Anthony, Patrick and Sara, nine grandchildren and one great-grandchild.

A celebration of Anne Wilson’s life will be held on April 28 at 2 p.m. in the Wilson Concert Hall. All are invited to attend.