Washington and Lee University School of Law will host the 2016 Law and Literature Seminar on Oct. 14-15. Now in its 24th year, the seminar will focus on the Shakespeare classic “King Lear.” All W&L faculty, students and staff are invited to attend.

Shakespeare’s powerful intellect places him among the most profound thinkers on issues of justice, law, punishment, and history. The figure of the old King, clinging to power, longing for loyalty and affection, then driven mad by betrayal, cruelty, and the inexorable passage of time, stands in our literature as a signal statement for the fate of man.

In 1605-06, the year of Lear’s composition, Shakespeare’s beloved Queen Elizabeth had recently died, and King James had taken the throne. Religious tension between Protestants and Catholics wracked the kingdom; an assassination attempt on James was narrowly avoided in the very year of the play’s production.

In the midst of growing turmoil, King James, like King Lear, suddenly found himself surrounded by advisors, counselors with conflicting motivations. Such tensions and stratagems doubtlessly influenced Shakespeare’s meditation on kingship and government. In such classic characters as the wise Fool, the loyal Kent, the conniving and treacherous Edmund, and the loving daughter Cordelia, Shakespeare embodies on the stage the most profound issues of his time.

Faculty for the weekend will include law professors Brian Murchison and Bob Danforth, former W&L law professor David Caudill, and English professor Marc Conner. Joining them will be Matthew Davies, assistant professor in the Shakespeare and Performance graduate program at Mary Baldwin University, and a professional actor and director

The program is co-sponsored with the W&L Alumni College program. The seminar is in the process of seeking approval for two hours of CLE ethics credit and is open to anyone interested in law and literature. 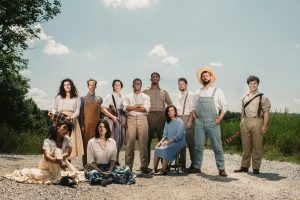