Back-Campus Trails Better Than Ever Volunteers have expanded and improved the system of trails on Washington and Lee University’s back campus, making them easier to navigate and convenient for users with different interests and abilities. 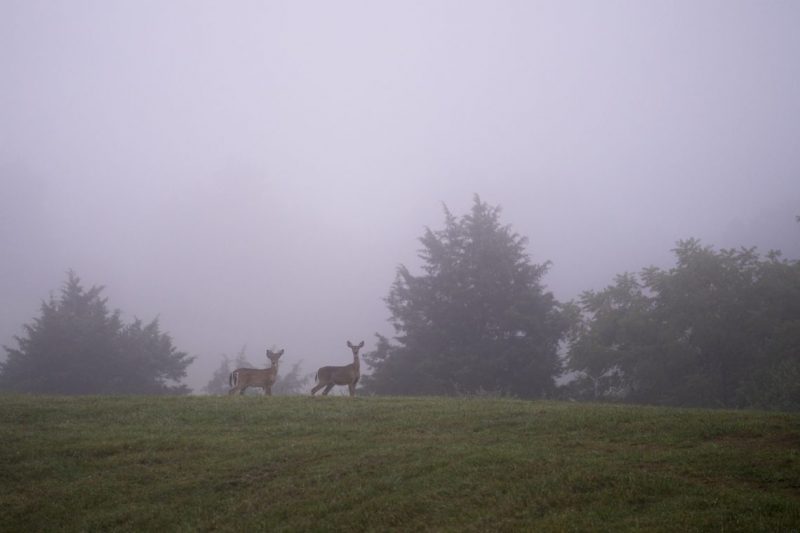 “What we’ve done now is actually create a well-designed, well-marked trail system that is accessible to everyone from beginner walkers to advanced mountain bikers.”~ James Dick, Director of Outdoor Education and Recreation

The back half of the Washington and Lee University campus has long been home to an informal network of trails, but recent improvements and additions to that trail system mean that members of the W&L community have even more space to explore, burn calories and avoid cabin fever brought on by COVID-19 physical distancing requirements.

“The old back-campus trails were good, and we’re so happy that they were preserved,” said James Dick, director of outdoor education at W&L, “but what we’ve done now is actually create a well-designed, well-marked trail system that is accessible to everyone from beginner walkers to advanced mountain bikers.”

Washington and Lee’s location in the mountains of central Virginia, along with its proximity to the Appalachian Trail and other popular recreation spots, has earned it a reputation as a great school for outdoor enthusiasts. Money magazine recently named W&L one of the 10 best colleges for people who love the outdoors. But students, faculty and staff don’t have to step foot off campus in order to enjoy nature, breathe fresh air and get a workout— they can even do it on a lunch break.

“Sometimes I’ll go for a quick bike ride to blow off some steam, and it’ll take me like an hour to do a loop on the trails,” said Raul Pinol Pascual ’23. He counts outdoor adventure opportunities among the reasons he chose to attend W&L. “I thought it was pretty impressive, considering the university’s size, that there are so many trails and there is so much property.” 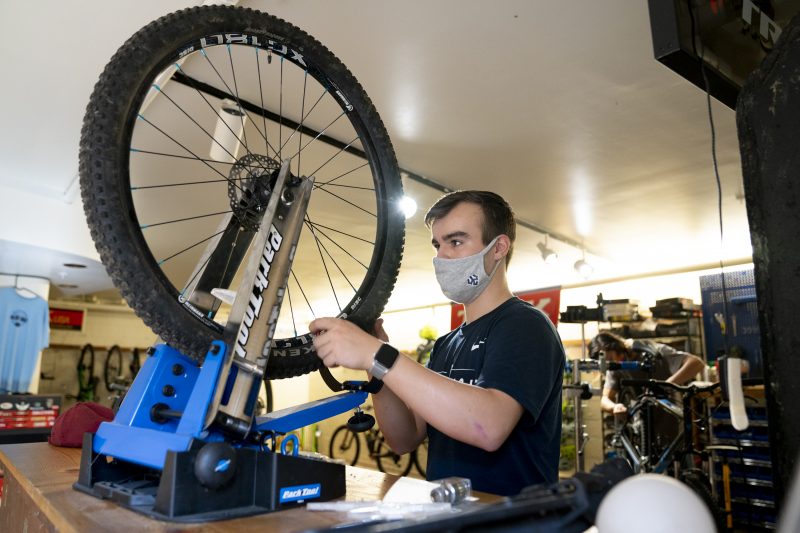 Raul Pinol Pascual ’23, who works in the W&L bike shop, said the back-campus trail system factored into his decision to attend W&L, and he runs and bikes on the trails weekly.

The area popularly referred to as “back campus,” which starts just behind the Liberty Hall ruins and the tennis center, is comprised of more than 300 acres of forest, fields and farmland that were once traversed by old logging and farm roads. Later, men’s cross-country coach John Tucker developed and maintained a cross-country race course in the area that is also part of today’s trail network. Over the years, a number of faculty and staff members at W&L discouraged development of back campus, and as a result, it has been preserved for recreation and educational purposes.

“A lot of people should be credited for having the foresight not to develop the back campus,” Dick said.

But the old back-campus trails left something to be desired. They drained poorly and were unmarked and unconnected, making them difficult to navigate. In the mid-2000s, Dick installed some posts as markers and Geology Professor David Harbor created a trail map.

“That got people out and about,” Dick said. “For example, I led a Café 77 lunch walk with a handful of employees who lived in Lexington but had never been on back campus. It was really nice to walk with employees who had never experienced the quiet, beauty and natural feel of those woods.” 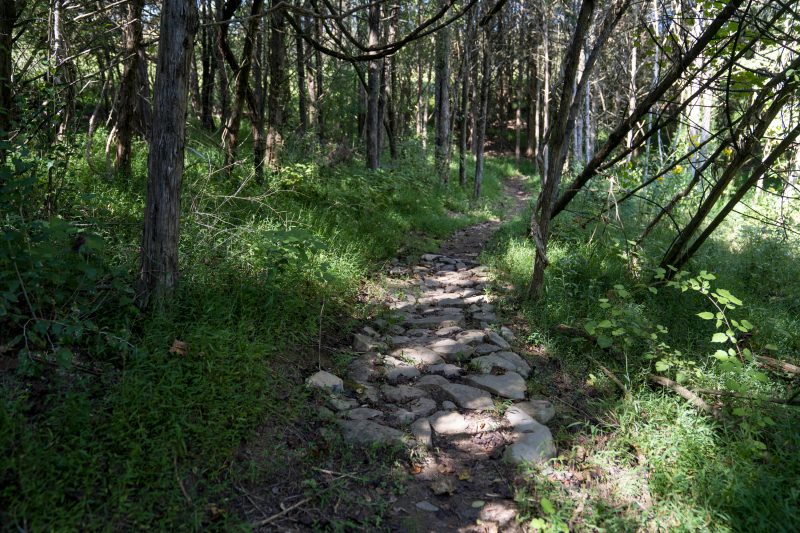 In some spots, volunteers used existing rock to solve drainage issues on the trails.

The next stage of trail improvements began about a year ago with a goal to improve signage, connect existing trails and build new trails on property more recently acquired by W&L, such as the 93-acre Peniel Farm. Two retired Washington and Lee coaches, Rolf Piranian ‘74 and Gavin Colliton, joined Dick and student volunteers to do the backbreaking work.

Piranian, who has been exercising on back campus since he was a student in the 1970s, said clearing new trails was “serious labor” that involved surveying, cutting and removing trees, smoothing terrain, and building berms and rock drainage fields. But it was also rewarding work.

“When you’re working on trails, people actually walk by and everyone is so appreciative,” Piranian said. “I feel like we’re filling a real void. It provides recreation opportunities for people in the community.”

Once the volunteers were satisfied that they’d finished the new trails, Harbor hopped on his bike and rode the entire system with a GPS mapping device mounted on his handlebars. He downloaded that data and created a new, color-coded map of the trails. 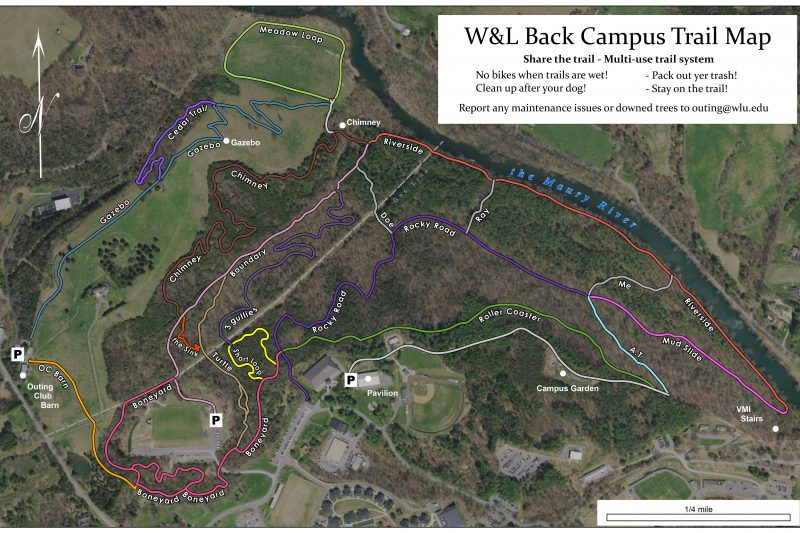 The new back-campus trail map can be downloaded from the Outing Club webpage (see link in story).

Harbor, who said his family uses the trails frequently and he enjoys biking them to reduce stress during the workday, hopes the new map will encourage folks to get out on the trails. “They’ll be surprised at how much territory there is to cover out there,” he said.

Dick estimates that there are about eight miles of trails on back campus now. “You could easily do a 5K without repeating any of the trails,” he said. He and Margaret McClintock ’15, associate director of intramurals and adventure programs at W&L, came up with names for the new trails, including Boneyard Trail, Three Gullies Trail, and Turtle Trail. Gazebo Trail is named after the gazebo on Peniel Farm, which has become a popular spot for students to watch the sun come up. “It is a really special location,” Dick said, “and there wasn’t an easy way to get there until now.”

Dave Pfaff, academic technologist in W&L’s IQ Center, used the center’s laser cutter to make signs for all of the trails, and volunteers installed those signs to improve navigation on the trails. 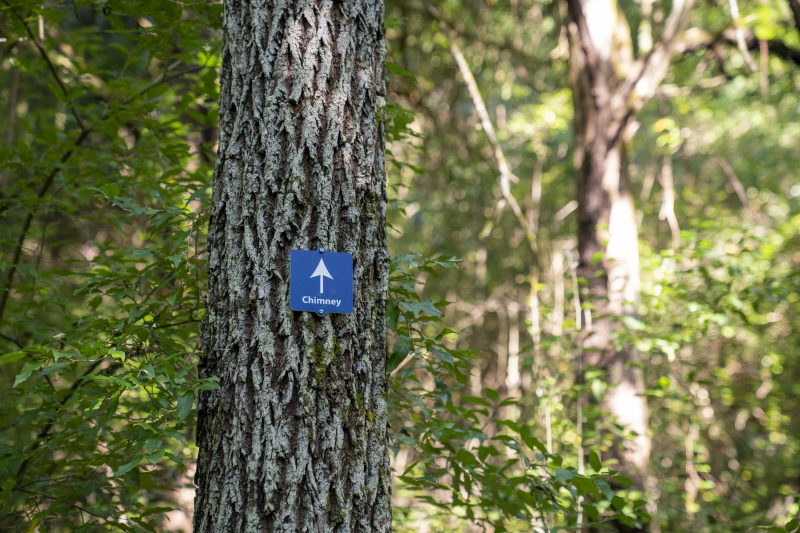 Academic Technologist Dave Pfaff used a laser cutter in the IQ Center to make trail markers like this one.

Trail workers are most proud of the fact that any user can meet his or her needs on the trails, whether they’re out for a relaxing stroll or looking to shred on challenging mountain-biking terrain. Raul Pinol Pasqual is also in the Triathalon Club at W&L, and he said he uses the trails for both running and biking.

“The new trails are significantly better than the ones that were there before because they’re more mountain biking-focused,” he said. “You can run on them, but they also have a bunch of berms and a few features you can do on bikes that make them more fun.” Mountain biking equipment, along with equipment for many other outdoor activities, is available for check-out at the Outing Club barn.

Dick has big dreams for the continued improvement of back campus, including the installation of historical markers at significant points along the trails. He also wants to start a back-campus steward program with student and staff members who can volunteer to clean up the trails and educate users. He pointed out that the back campus land is already the site of numerous student and faculty research projects. 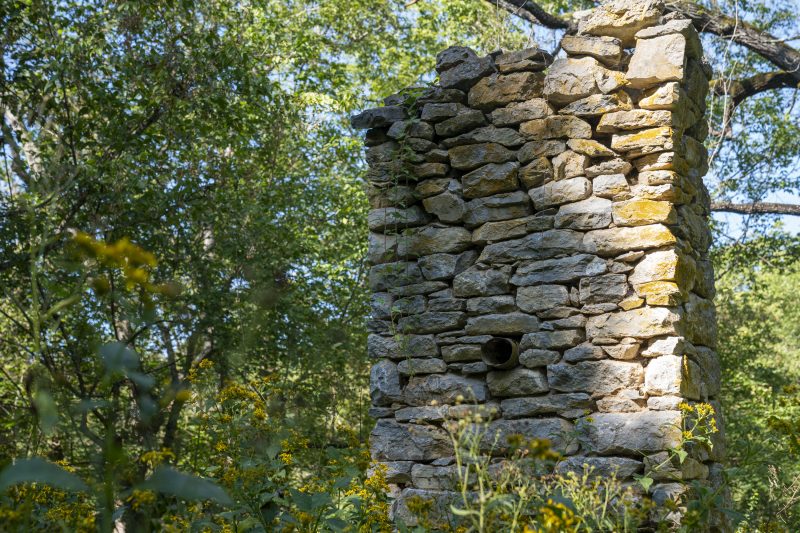 A number of faculty conduct research on back campus; this chimney is part of some ruins that Archaeology Professor Don Gaylord has been studying. Trail users are urged to stay on the trails to avoid negatively impacting research projects.

For example, Archaeology Professor Don Gaylord has conducted a great deal of research on back campus to better understand the history of W&L and its land. Biology Professor David Marsh currently has two projects on back campus, one on garlic mustard and one on red-backed salamander, and Biology Lab Instructor Charles Winder is conducting an ongoing inventory of plant species on campus. William E. Pritchard III ’80 Professor of Geology Chris Connors and his students conduct geophysical experiments, looking at a sinkhole on the property and the flood plain and associated river terraces.

“Students get lots of hands-on experience collecting and processing these types of data in class,” Connors said. “The large amount of land on back campus lets us conduct these experiments in a convenient, safe way.”

Faculty members do want trail users to know that they can negatively impact research projects on back campus if they’re not careful about where they step. “People should stay on the trails and not pick the wildflowers and not disturb the wildlife,” Harbor said. “There are lots of things happening back there.”

The back campus gazebo

Dick hopes that in coming years, more faculty will find a way to use the land “to get creative with their classrooms.”

“This is a liberal arts university and liberal arts is grounded in the natural world,” he said. “What better place than a gazebo on a beautiful hilltop overlooking the Blue Ridge to read Thoreau or contemplate philosophy?”

New users of the trails who aren’t sure where to begin should download a trail map PDF online and park at the Outing Club barn, the Boneyard lot or next to the Pavilion, Dick said, then start exploring from there. Before long, they’re likely to feel some stress melt off and forget that they’re on a university campus in the middle of a city.

“What we’re hoping to achieve is for people to be able to recreate safely out there,” he said, “and not feel that they have to drive to the Appalachian Trail to walk in the woods.”