Behind the Lens Mai Spurlock Sykes ’94 and sister Kim Spurlock make a fierce team when it comes to independent filmmaking. 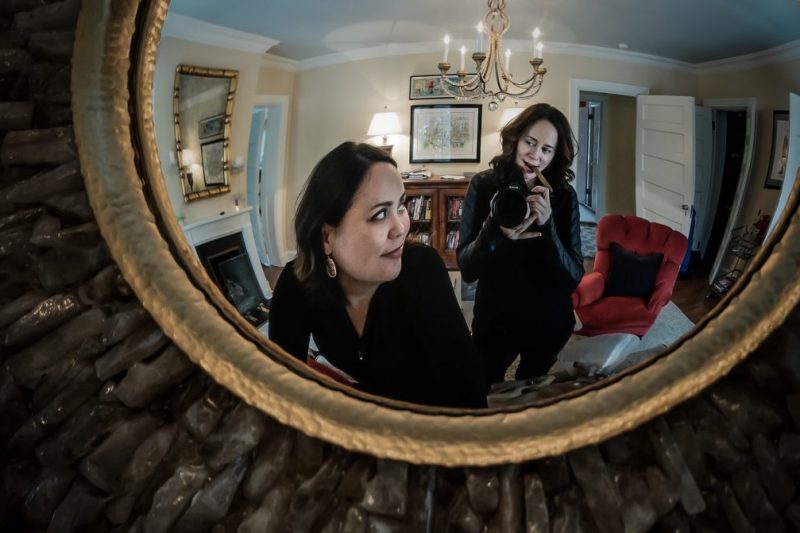 “We like to tell simple, character-driven stories. The stoicism of our Asian grandparents and the humor of our Appalachian forebears also makes it into our work.”
~ Mai Spurlock Sykes ’94

Brainstorming, “riffing ideas,” outlining, co-writing, researching, directing and producing. From scratch to a finished, award-winning film, Mai Spurlock Sykes ’94 and sister Kim Spurlock make a fierce team when it comes to independent filmmaking. With some rewarding and successful projects under their belts, the pair has several screenplays in the works, ranging from a whodunit set in a coal-mining town to a Vietnamese ghost story and a reimagining of Hansel and Gretel.

“We like to tell simple, character-driven stories,” Spurlock Sykes explained. “The stoicism of our Asian grandparents and the humor of our Appalachian forebears also makes it into our work.” When Kim Spurlock earned her Master of Fine Arts in film production from New York University, Spurlock Sykes found her true calling as a screenwriter. The duo formed the Spurlock Sisters, a film company they say was first conceptualized when they were kids sneaking off to the movie theater to escape the summer heat in Huntington, West Virginia.

Their late mother was Vietnamese and grew up in a family involved in the South Vietnamese government. They were among the thousands of refugees who fled Vietnam when Saigon fell in 1975. Their father, a 1972 graduate of W&L Law, is a retired attorney in his home state of West Virginia. His family built Midkiff, West Virginia, a small coal-mining town, in the early 20th century — though very little of it remains today. “Growing up, we were part of two distinct worlds – our father’s world of small-town West Virginia and the Vietnamese expat community in Washington, D.C.,” Spurlock Sykes said. “We spent our childhood steeped in worlds that were fast disappearing, and that sense of loss and melancholy is often incorporated into our projects.”

Aside from the interesting perspective their heritage lends to their films and screenplays, the Spurlock Sisters also give women leading roles — both as antagonists and protagonists — helping to balance the scales not only in the male-dominated film industry, but in fiction overall. The Spurlock Sisters themselves challenge the status quo as women leading the creative process from start to finish for all of their projects, including “Livin’ the Dream,” a web series that tells the story of a filmmaker and her challenges in achieving her professional goals. The series won awards for best writing and best series at the Brooklyn Webfest.

“Seeing our films on-screen elicits for me simultaneous terror, grief, wonder and joy — the terror of judgement, the sadness of letting go of something that has been gestating for years, the wonder of seeing the film come to life as it reaches the eyes of others, and the joy of creativity and completion,” Kim Spurlock said.

Spurlock Sykes double-majored in business administration and fine art at W&L and holds a master’s degree in ancient history from the University of St. Andrews. Her background in ancient history influences characters in her screenplays, adding depth that has resonated with audiences through the ages. She married Scott Sykes ’94 and volunteers for W&L as a class agent. Recently, the Class of 1994 won the Washington Trophy for the 2020–21 year for raising the most money of any class outside of a milestone reunion year.

Kim Spurlock earned her undergraduate degree in anthropology from Vanderbilt University and holds a master’s degree in film from American University and an M.F.A. in film production from NYU. She works as an advisor for the Sundance Co//ab, the digital arm of the Sundance Institute that supports and connects artists.