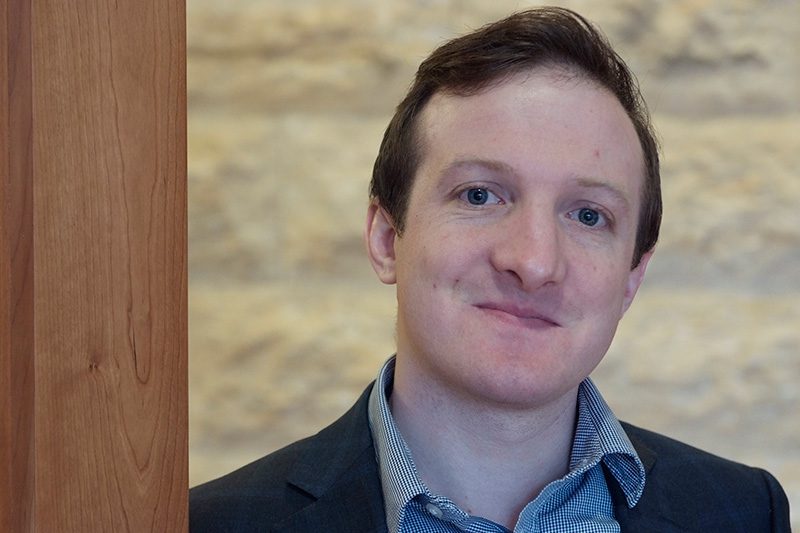 When Ben Ersing ’12 arrived on the Washington and Lee campus his freshman year, he had a lot of questions he hoped to find answers to in the next four years.

Ersing spent a gap year between high school graduation and matriculation at W&L as a volunteer in Ecuador’s capital city, Quito. “I was completely on my own,” said Ersing. His goals were to become fluent in Spanish, volunteer for nonprofit organizations and learn to dance Salsa.

He accomplished those goals, but more importantly, the experience set his studies, life and eventual career on a path that would compel him to have a lasting positive impact on society.

It was in Ecuador that Ersing experienced significant economic underdevelopment and social injustice firsthand. At W&L, in a class taught by Jeff Barnett, professor of Spanish and program head for Latin American and Caribbean Studies, he began to understand the causes of those conditions and the discontent toward the United States’ foreign policy that often resulted.

A documentary about the perils faced by undocumented migrant workers crossing the U.S.-Mexican border shown in the class “had a profound impact on my career trajectory,” he said. The following summer, using a small stipend from W&L, Ersing volunteered with one of the organizations profiled in the video, conducting field research in Mexico with his spare time.

“I came to the personal conclusion that the best solution to address poverty and underdevelopment, and subsequently, the need for migration, was access to better paying jobs,” said Ersing. He realized that if he wanted to have a lasting impact, he had to find a way to provide potential migrants with access to a sustainable income.

Back at W&L, Ersing began what has become his life’s work. He enrolled in an economic development course taught by James Casey, associate professor of economics. That led to his organizing the General’s Development Initiative, nonprofit organization that provides micro-financing (loans without collateral up to $5,000) to people in developing countries. Because of his network of contacts in Ecuador, the group initially worked on projects there. The organization continues to make loans in developing countries, and students often travel to work on the projects they fund.

Ersing started GenDev, as it is known on campus, with his own funds. As the organization grew and developed a business plan, fundraisers and university grants provided additional support.

After graduation, Ersing was determined to continue on his social entrepreneurship path. He moved to New York City and enrolled at NYU for a master’s degree in international business and diplomacy. At the same time, he went to work for the Center for Technology and Economic Development, where he became involved in smallholder agriculture market and commodity exchange development, while also researching the role of early entrepreneurs in post-colonial West Africa. He was gaining the skills needed to advance his passion for combining business with social impact.

Ersing received the master’s degree and nine months ago joined The Palladium Group, a global, boutique strategy consulting firm in New York City. He was in the right place at the right time, he said, because the company recently merged with GRM International, a large international development consulting firm headquartered in Australia.

Though exactly what the new entity will look like is still emerging, executives of both firms see the new company as being one in which GRM’s expertise in the developing world is leveraged to provide private sector clients in the United States with insight into emerging market trends and the opportunities around Shared Value, a concept named by Harvard University professor Michael Porter. “Corporations need to look at the value they provide to society as well as to their financial stakeholders,” Ersing explained.

Even before the merger, Ersing was able to do some pro bono consulting work with small nonprofits and environmental organizations, including one focused on wildlife preservation and economic development in Sri Lanka.

He also is a member of an advisory board of an impact investing advisory firm organized by several NYU alumni. The firm facilitates connections between private capital in the United States and small businesses in sub-Saharan Africa.

Ersing credits his three W&L advisors — professors Barnett, Casey and Tyler Dickovick, associate professor of politics — with helping him find the answers he sought as a freshman.

He now recognizes that inequality and limited access to information and opportunity are realities of the world we live in, “but it is a reality I don’t want to accept. I feel that I have an ethical obligation to provide a tangible social impact while simultaneously providing for myself and future family.”