Best of Both Worlds Professor Kevin Finch, who just released a new documentary, loves that W&L faculty have “this wonderful combination of academic credentials and practical experience.” 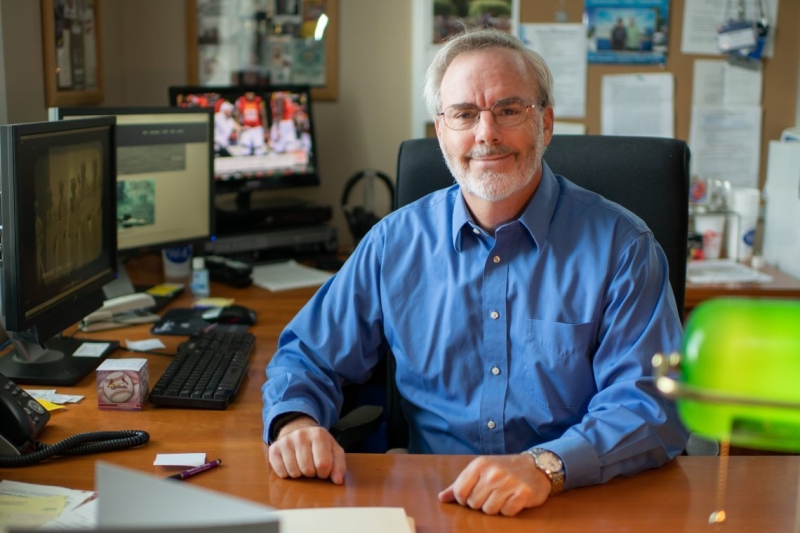 In his second documentary film, “Triton: America’s Deep Secret,” Professor Kevin Finch uncovers a secret submarine mission that took a crew around the world with little knowledge of where they were headed.

The film made its world premier in April at the Silicon Beach Film Festival in Los Angeles as an “Official Selection.” It had two public screenings this summer, in Indiana and Connecticut, and will debut on a New England regional public TV network this November.

“A documentary is sort of an all-consuming enterprise, especially when you’re the one in charge of it,” said Finch, an assistant professor of journalism. With his role as producer, director and writer, he plays a large part in curating the film, but his past projects prepared him for the challenge.

The new film is about Triton, the first submarine to sail around the world fully submerged the entire time. Launched in 1960, Triton’s mission was a secret from the entire world and the crew on board. It was the largest submarine yet built – the first with three decks and the only American sub with two nuclear reactors on board. The film uncovers this classified mission and its underwater adventures through firsthand accounts of crew members, historians and experts.

Finch’s biggest challenge was collecting accurate information about an event that took place so long ago. The seemingly endless research included interviewing Navy veterans who were not used to talking about their missions, as well as tracking original footage of the submarine launch from NASA archives around the country.

“There is a research component for a documentary that is harder than usual because you are tracking down not just text but moving images,” Finch said. “That is a big part of what I did in 2016-2017 but it never stops. It goes on and on and on.”

Since 1996, he has been involved in several documentary projects, but the first documentary he produced, wrote and directed was “A Writer’s Roots: Kurt Vonnegut’s Indianapolis” in 2015. That project took about four and half years to complete.

Finch said the making of “Triton” informed his documentary filmmaking classes and inspired his future projects.

He said he likes making documentaries because “it is an opportunity to, in my case, tell stories that people aren’t aware of. Documentaries, if done well, take you to a place you’ve never been or tell you a story you’ve never heard.”

The university has been able to support both of Finch’s documentary projects since he’s joined W&L, either by promoting the film post-production or through funding opportunities during the making.

When he first visited campus five years ago, he said, he loved the small size of the school and “the fact that so many of our faculty have this wonderful combination of academic credentials and practical experience.”

One of his biggest roles on campus since he joined W&L has been as faculty advisor of Rockbridge Report. He not only oversees the weekly broadcasts but also mentors student journalists, anchors and producers.

Finch described his W&L experience as combining the best parts of his interests – teaching, producing live news television and making documentaries – “but it has this added element of guiding and helping students to grow, which you can’t get in the professional field.”

What documentarians inspire your work?

What advice would you give students who aspire to be filmmakers?

If you could take a class at W&L, what would it be?

What is your favorite place to eat in Lexington?

Sunday nights at Haywood’s is a ritual for me, but my go-to from my first week in town has been the Southern Inn.