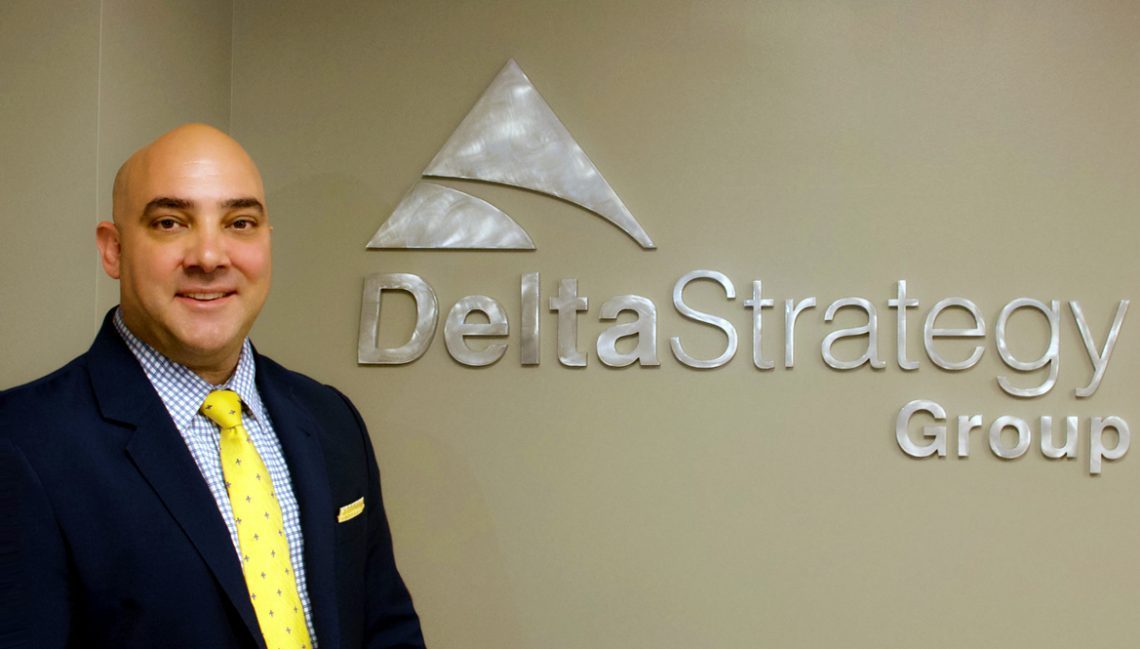 As a partner with Delta Strategy Group, Kevin Batteh, ’95 and ‘98L, brings years of expertise in financial services regulation to the table. But it was his personal interest in an emerging technology that he began to explore in 2012 that has changed the course of his career.

“In 2012, I started learning about blockchain and Bitcoin as a personal interest,” Batteh said. Two years later, as those technologies grew exponentially, “I saw a need from potential (Delta) clients for advice” in those areas.

Typically, Delta Strategy Group works with such clients as asset managers, hedge funds, proprietary trading firms, regulated exchanges, as well as agricultural and energy companies that use derivative markets to hedge their business risk, he explained. “These clients want to understand and inform regulators and shape regulation,” he explained.

In the same manner, blockchain companies – companies providing a form of decentralized, distributed and public digital “ledgers” that record transactions across many computers – needed help navigating federal regulations and legislation affecting their sector.

“In 2014, we began representing new start-up companies that have now grown into multi-million- and billion-dollar entities. We still provide services to them and help them to engage with the CFTC, SEC, other regulators and Capitol Hill,” Batteh said.

This year Batteh formed Jenga Advisors, for which he serves as CEO. Jenga Advisors is a niche business set up to advise blockchain companies on compliance and secondary market listings on digital asset trading platforms. To be successful, he said, “these companies need wide distribution of their digital tokens.”

When a transaction takes place using a token, such as Bitcoin or Ethereum, “we don’t have to worry about foreign currency or banks. There is a lot less friction,” Batteh explained. For smaller projects that utilize an in-app token to exchange value and exchange goods or services, users often need a place to purchase or sell the tokens – a secondary market or exchange – “and that is where we come in.”

Digital asset exchanges are located in the United States and overseas. Clients want their tokens listed on a trading platform, and “we make sure they comport with relevant regulations and work with the exchanges to get them listed.” Asian markets are leaders in this field, which takes Batteh to such places as Singapore and Korea to learn about foreign regulations and help clients get listed in those jurisdictions.

“Some Asian jurisdictions are rolling out the red carpet. They see the value to their jurisdictions’ in hosting the exchanges.”

In the U.S., he said, “We have really worked hard to educate Congress and regulators” about the technology. “We also work with the Digital Chamber of Commerce,” an American advocacy group that promotes the emerging industry behind blockchain technology, Bitcoin and other digital assets.

Batteh – as a Delta Strategy Group partner and Jenga Advisors CEO – sits at a unique crossroads. He understands the traditional regulatory regime his clients face as well as the mechanics of his new high-tech clients’ businesses. As the new technology continues to emerge and grow, he is seeing traditional clients wanting to learn more about blockchain and, in some cases, trading in digital assets, and he has seen his new client base seek to engage with traditional financial market participants, a crossover that he describes as “very rewarding.”

Originally from Jacksonville, Florida, Batteh decided he wanted to go to a small, liberal arts college. While on a college tour with his father, they decided to visit Washington and Lee, his godfather’s alma mater. “It was spring, and as soon as I stepped foot on the campus, it was love at first sight,” he said. He also liked the location, which provided ample opportunities for taking part in outdoor activities, one of his passions.

When the time came to select a law school, he applied to several, but W&L’s high ranking and opportunities for career options led him back to Lexington. As a law student, Batteh served on the university’s executive committee, for which he was president his third year. That position included presiding over all university honor trials and being responsible for budgets for campus clubs.

“At first, I thought I’d be a criminal prosecutor, and I worked in the Jacksonville DA’s office one summer.” He changed direction during his third year, and while studying for the bar exam, a friend and W&L law alum called to tell him of some openings at Hunton &Williams in Richmond. He landed a job there in litigation and stayed three years before moving to D.C. and Troutman Sanders, where he worked another two years.

Deciding he wanted another career change, Batteh followed up on a classmate’s suggestion to work at the CFTC (Commodity Futures Trading Commission), an independent federal agency that regulates futures and options markets and prohibits fraudulent conduct in futures trading. He worked for CFTC as a trial attorney in the Division of Enforcement, where he investigated and prosecuted cases of fraud and market manipulation in federal district courts across the country.

Batteh left CFTC in 2008 to take a senior lawyer role with the UK Financial Services Authority, later returning to CFTC in 2010 to serve as chief trial attorney. In 2011, he transitioned from enforcement to a position as counsel to CFTC commissioner Jill Sommers, where he provided legal and policy advice. Prior to joining Delta, he was special counsel to the ranking member of the Senate Agriculture Committee.

Parents of three children, Batteh and his wife, a health economist at the World Bank, are involved outside of their offices with soccer, Girl Scouts and gymnastics. Their son is 3, and the two daughters are 7 and 9.

He often talks with W&L law students referred by the career office and noted that he has encountered W&L alumni throughout his career, including at the CFTC, which has hired a number of W&L graduates. He also recently hired a law alum at Delta.

While navigating complex issues and emerging technology, Batteh loves what he does. “I learn something new every day. I have expertise to lend, and I also learn from my clients.”