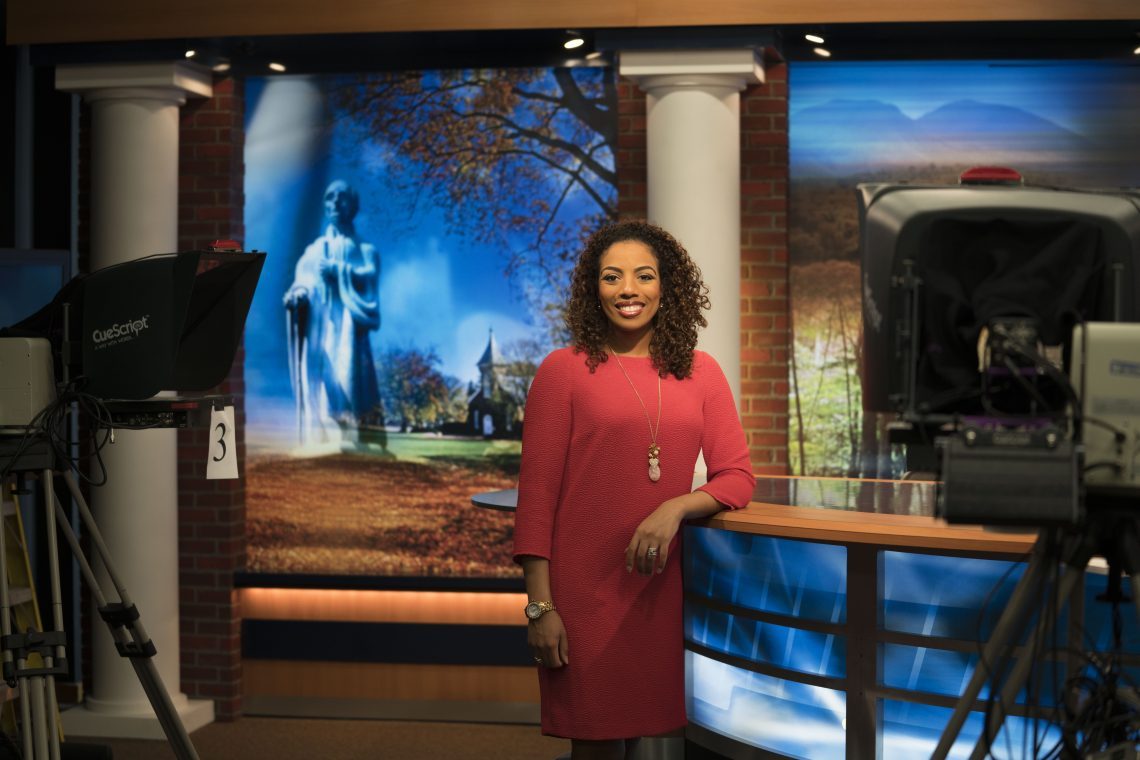 Breaking the Rules in Journalism In a recent visit to campus, Alisha Laventure ’09, a television news anchor in Dallas, told journalism students about how a national story became personal.

“I did something journalists aren’t supposed to do. I shared a deeply emotional story.”

While on campus to talk to journalism classes and to present the keynote address for the university’s chapter of Society of Professional Journalists, Alisha Laventure ’09 told students in JOUR 101 that when she took the class with Professor Brian Richardson ’73, he preached the importance of neutrality.

“As journalists, we’re supposed to keep our distance so we can tell the story,” said the noon and 4 p.m. anchor of Dallas’ WFAA (Channel 8). “We’re not supposed to have an opinion. But the rules of journalism are changing. With so many sources of information available, it becomes more important than ever for journalists to provide the public with a road map — to give them some context to help them make sense of it all.”

On Jan. 12, she became what most journalists seek to avoid — the story. The day before, President Trump, behind closed doors, allegedly derided protections for immigrants from certain countries (If you need a refresher on the controversy, here’s a link). “It was a blatantly racist comment,” said Laventure. “He clearly singled out predominately black and brown countries.”

Laventure, whose parents left Haiti for the U.S. as youngsters, was furious. “This hit close to home for me,” she admitted. “My parents came to this country with nothing. They had to start completely from scratch. So for the president of our country to say what he did — to make such a vulgar comment about people who were simply trying to achieve the American dream through hard work — was deeply disturbing. I was angry that no one was delving into it. Why was no one discussing the significance of his statement? If the head of a corporation had made such a statement, he would have been immediately fired.”

With the support of her supervisors, she posted a response on Facebook and crafted a statement to air live, during her evening anchor duties. “It was a drop-the-mic moment,” she said. “Everyone in the studio clapped.” And then she waited nervously for the comments to roll in.

“This is the Red State of Texas, after all,” she said.

The majority of the feedback, however, was supportive. “People thanked me, even Trump supporters.” What surprised her was how quickly the segment went viral. Within a few days, the clip had 6.4 million views, from all over the world.

“I did something journalists aren’t supposed to do,” she said. “I shared a deeply emotional story, but I stand by my decision. You can’t just tip-toe around certain topics. After this broke, a former professor reminded me that ‘There comes a time when the best way to tell a story is to get personal.’ ”

Laventure noted that the rules of journalism are changing in the era of social media. In her community, she’s a public figure and is supposed to engage with her audience not only on the air, but through Facebook and Instagram. The ABC-affiliated station is ranked in the top-10 nationally, which means Laventure reaches a sizable audience everyday.

“I struggle with finding the right balance,” she said. “I might be posting about an important local issue, and the comments are about what kind of hair conditioner I’m using. So I stick to asking open-ended questions to get a conversation going.”

Ultimately, she hopes that by consistently telling balanced, well-researched stories, she is also building trust with her viewers — then, when she needs to offer an opinion piece, they’ll stick with her.

Before joining Dallas’s WFAA (Channel 8), Laventure worked for News 12 Long Island and was a member of News 12’s Bronx/Brooklyn operation, serving as an anchor, reporter and call-in-show host. In addition, she has worked at Myrtle Beach’s WMBF, as a production assistant and editor in affiliate relations at CBS in New York, and as a reporter based in Bogotá, Colombia, for Reuters in 2008. She helped produce the Emmy Award-winning documentary “The Lost Children of Haiti,” which examined the devastation of the 2010 Haitian earthquake.

At W&L, Laventure double-majored in journalism and mass communications and in Romance languages, and studied abroad in Senegal, China, Peru, France, Colombia and Ghana. Upon graduating, she received the prestigious Todd Smith Fellowship to do overseas reporting with Thomson Reuters in Colombia. She’s fluent in French, Spanish and Haitian-Creole.