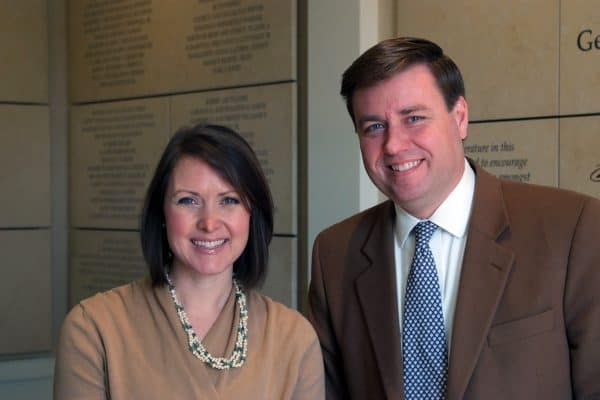 Washington and Lee University welcomed two new members to its Board of Trustees during the board’s winter meeting on Feb. 9.

Brodie G. Riordan ’03 graduated from W&L with a B.A. in psychology and holds a Ph.D. in industrial/organizational psychology from the University of Akron. She is the manager of partner learning and development at McKinsey & Co.

As a student, Riordan was a founding member of the varsity field hockey team and was president of Kappa Delta Sorority. As an alumna, she has served as president of the W&L Alumni Board and the Cleveland Alumni Chapter, chaired the Science Advisory Board and served as a class agent.

Before joining McKinsey, Riordan was a senior consultant with PDRI, was manager of global leadership development at Procter & Gamble, and was a visiting assistant professor of social and organizational psychology at W&L.

Riordan has published over two dozen articles and book chapters on leadership, feedback and coaching, including “Using Feedback in Organizational Consulting,” the first book in an American Psychological Association series. She is on the board of the D.C. chapter of Back on My Feet, a nonprofit that helps homeless individuals get their lives back together through the power of running.

Riordan and her husband, Tim, live in Washington, D.C.

Clifford Holekamp ’96 graduated from W&L with a B.A. in journalism and holds an M.B.A. from Washington University in St. Louis. Holekamp is co-founder and general partner of Cultivation Capital and is the academic director and senior lecturer for entrepreneurship at Olin Business School at Washington University.

He formerly worked for IBM and was the founder and president of Foot Healers, a chain of podiatric medical centers. He serves on several early-stage corporate boards, as well as several philanthropic boards, including at the St. Louis Zoo, the T-REX technology entrepreneur center, and the Donald Danforth Plant Science Center.

As an alumnus, Holekamp has served as president of the St. Louis Alumni Chapter and on the Board of Advisors for the Williams School of Commerce, Economics, and Politics. He received the Distinguished Young Alumni Award in 2011. Currently, he serves on both the Development and Finance Committees.

Holekamp resides in St. Louis with his wife, Megan, and daughters Millie and Ginny.