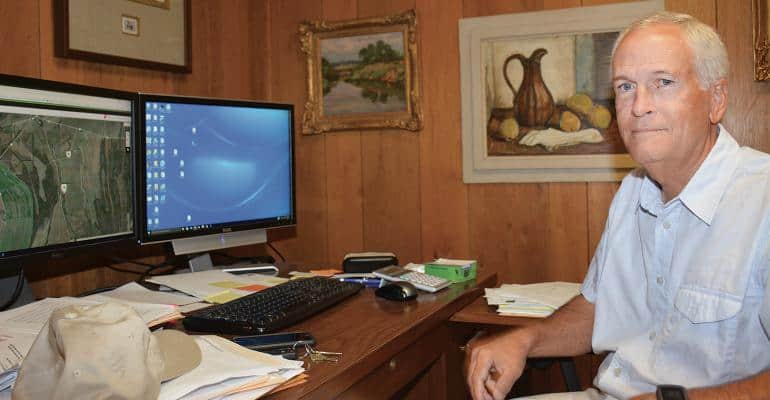 Byron Seward ’70 in his office in Louise, Mississippi. He uses MobileStar virtual dashboards that allow him to remotely monitor all of the equipment on his farm.

Byron Seward, a 1970 graduate of Washington and Lee University, farms over 20,000 acres, with his son, Darrington, near his office in Louise, Mississippi. What’s unusual is that he’s checking in on his farm from his office computer, using long-distance monitoring to manage his 300 fields of cotton, soybeans and corn.

“We like the remote display access that allows us to see, in real time, where all our equipment is, how it’s operating, what the yield is, and an extensive array of data that we can use to analyze every factor that influences crop performance and yield,” said Byron in an interview with The Delta Farm Press. “With this technology, there are no secrets — we can see where all of our equipment is, and how it’s operating.”

His attention to detail on production, efficiency and conservation earned him the 2017 Delta High Cotton Award presented by Farm Press and The Cotton Foundation for his efforts to produce a quality fiber economically and in an environmentally responsible manner.

“Byron and Darrington are some of the most efficient and innovative farmers I’ve encountered anywhere,” said Peter Peerbolte, a veteran agricultural marketer who nominated Byron for the award. “They are on the cutting edge of technology — and they use that technology to great benefit when it comes to stewardship of the land.”

When Byron graduated from W&L, he entered the Army and worked as a systems analyst, which gave him a leg up in what he calls the “brave, new world of digital farming.”

After his service, Byron, too, became a farmer like his father and grandfather before him. His approach, however, was a bit different. Early on, he began using variable-rate fertilizer applications, which gave him greater control over the amount of nutrients he applied to his crops.

Over the years, it’s not just the precise application of fertilizer, seed and herbicides that Byron has perfected. He also uses variable-rate application systems for plant growth regulators, defoliants and irrigation. In addition, he rotates crops and has experimented with the spacing between rows of planted crops.

“Farmers I talk to find themselves in a difficult situation, one in which it’s getting tougher to hang on,” Byron said. “We need some relief from these low [commodity] prices and high input costs to make it easier to invest in new technology.”