Can Law Keep Up? A new book by W&L Law professor Joshua Fairfield examines how the law can keep pace to govern rapid advancements in technology. 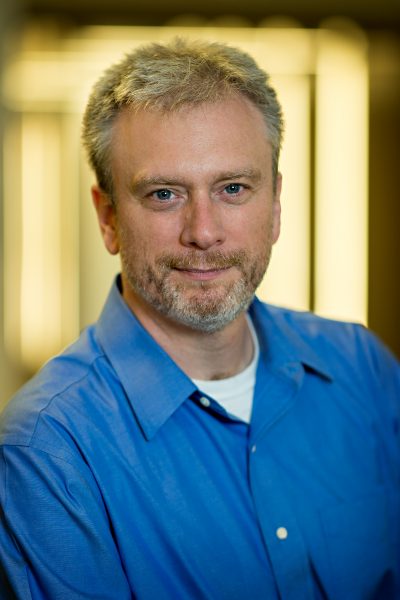 Joshua Fairfield, the William Donald Bain Family Professor of Law at Washington and Lee, has spent his entire academic career researching the cutting edge of technology from a legal perspective. He has examined property ownership and contracts in virtual worlds, big data privacy, bitcoin and other cryptocurrencies, and the use of digital information to establish guilt or innocence in a criminal context.

If there is one thing that ties his work together, it is the notion that the law is ideally suited to deal with advances in technology, no matter how rapid the change or how fundamental the impact on our lives.

“Throughout our history, the law has helped us deal with new questions, many times sprung from new technology, be it railroad transportations systems or skin grafting,” says Fairfield. “Law is the system for adapting human culture and response to technological change.”

It is this concept that Fairfield explores in his new book “Runaway Technology: Can Law Keep Up,” available now from Cambridge University Press. In an era of corporate surveillance, artificial intelligence, deep fakes, genetic modification, automation, and more, law often seems to take a back seat to rampant technological change. In fact, giant technology companies actively work against attempts to regulate and reign in their efforts, pushing the myth that law is unable to match the speed of technological development.

However, Fairfield rejects this notion and argues that not only do legal frameworks already exists to govern most new technology, but also that the law itself is a uniquely human technology capable of rapid evolution.

“Law can keep up with technology because law is a kind of technology – a social technology built by humans out of cooperative fictions like firms, nations, and money,” says Fairfield. “However, to secure the benefits of changing technology for all of us, we need a new kind of law, one that reflects our evolving understanding of how humans use language to cooperate.”

Praise for the Book

“Professor Fairfield has given us a critically important and engaging book. It is urgent, yet has timeless wisdom. It is erudite, but also highly accessible. It is consequential yet still laced with commendable levity. Runaway Technology is a must-read not just because of its insight into whether the law can keep up with modern technology, but because of its perspective on the law itself as a tool for human flourishing.”

“Fairfield’s Runaway Technology offers a powerful argument for the centrality of law to our efforts to tackle a range of contemporary threats through organization and cooperation. Recent decades have seen a shift in power away from legal institutions and towards private actors and the technologies they control. By rejecting the reductive turn to economics and techno-determinism that drive policymaking today, Fairfield reminds us that law, when properly conceptualized as a dynamic social technology, provides a set of tools for constructing, adapting, interrogating, and justifying the narratives that guide our culture and our future.”

Joshua Fairfield is an internationally recognized law and technology scholar, specializing in digital property, electronic contract, big data privacy, and virtual communities. He has written on the law and regulation of e-commerce and online contracts and on the application of standard economic models to virtual environments. Professor Fairfield’s current research focuses on big data privacy models and the next generation of legal applications for cryptocurrencies. His articles on protecting consumer interests in an age of mass-market consumer contracting regularly appear in top law and law-and-technology journals, and policy pieces on consumer protection and technology have appeared in the New York Times, Forbes, and the Financial Times, among other outlets. Before entering the law, Professor Fairfield was a technology entrepreneur, serving as the director of research and development for language-learning software company Rosetta Stone.

Professor Fairfield consults with U.S. government agencies, including the White House Office of Technology and the Homeland Security Privacy Office, on national security, privacy, and law enforcement within online communities and as well as on strategies for protecting children online. From 2009 to 2012, he provided privacy and civil liberties oversight for Intelligence Advance Research Project Activity (IARPA) research programs in virtual worlds. In 2012-13 he was awarded a Fulbright Grant to study trans-Atlantic privacy law at the Max Planck Institute for Research on Collective Goods in Bonn, Germany. He was elected a member of the American Law Institute in 2013. In 2017, he published Owned: Property, Privacy, and the New Digital Serfdom with Cambridge University Press. Following a Fernand Braudel fellowship at the European University Institute in Florence, Italy, he completed his current forthcoming book, Runaway Technology: Can Law Keep Up (Cambridge University Press 2021).