Anjelica Hendricks ’15L, from Richmond, VA,is a graduate of James Madison University. She is a student attorney in the Criminal Justice Clinic. Following graduation, she will work for the Defender Association of Philadelphia. 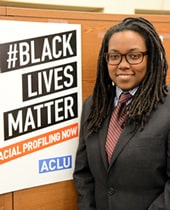 Why are you interested in a career in criminal law?

It’s not hard to realize that the criminal justice system is the most oppressive hand of society. Many of the obstacles impoverished individuals face are due to the effects of consistent over-policing and inherent flaws in the systems that surround them. Many say that the system is broken, but it’s not. The system was designed this way; it was designed to dehumanize poor people. I don’t expect to save anyone by doing public defense. It’s not some weird superman complex. I want to be a public defender because the system destroys communities. I cannot think of another career to have other than to try to prevent this injustice.

What/who were you most influential classes/professors related to that interest?

Professor King’s Evidence and Criminal Procedure courses were excellent. Additionally, being a Student Attorney in the Criminal Justice Clinic has exposed me to exactly what I will be doing after graduation. I take on my own cases and investigate the alleged crime, talk to witnesses, negotiate with prosecutors, and prepare for trials. Professor Shapiro was my supervising attorney in the clinic, and we had weekly meetings discussing my progress in all of my cases.

Where will you be working following graduation?

I will be joining the Defender Association of Philadelphia (DAP) after graduation. I will use the skills I learned in the clinic and apply them to a higher caseload. The Association leads the country in training public defenders and is nationally known for having the best litigators. Philadelphia is one of the poorest cities in America, and its police force is known for corruption. Just recently, six Philadelphia officers were charged with fabricating evidence, stealing from people, and threatening people to ensure silence. Even with this evidence, most of the people these officers helped get convicted remain incarcerated. The Association works to protect the people of Philadelphia and bring down corrupt police.

In what ways did the school help with your job search and success?

I first interviewed for DAP at the Southeastern Minority Job Fair. At this fair, only students of participating law schools could attend, and W&L was a member. I received a call back for a second interview, and the Career Office introduced me to an alumna in Philadelphia who went above and beyond to help me, including offering her home when I came to interview and calling friends that she knew in the office on my behalf. My third and final interview focused on my participation in the Criminal Justice Clinic, and they loved hearing of a program that gave me an opportunity to get my feet wet.