Laura Iheanachor ’15L, from Wake Forest, NC, is a graduate of East Carolina University. She is a member of the Black Law Student’s Association Mock Trial team. Following graduation, she will work for the Kings County District Attorney’s Office in Brooklyn, New York. 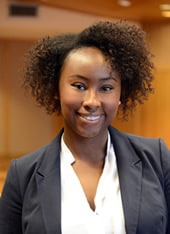 Why are you interested in a career in criminal law?

I have always had an interest in criminal law, but my interest did not grow into a career aspiration until after my 1L summer at the North Carolina Department of Justice.  While working there, I discovered that I did not want to be the type of lawyer who was confined to an office day in and day out.  At that point, I decided that I wanted a career that was litigation-based.  At the suggestion of a mentor who began her career as a prosecutor, I decided that for my 2L summer, I would apply to the Wake County District Attorney’s Office in Raleigh, North Carolina.  During my time as an intern, I completely fell in love with prosecution.  It was exciting, entertaining, frustrating, and challenging all at the same time.  I enjoyed being in a position to represent the state, seek justice for victims, and to reap the rewards of providing an essential public service.  It became my goal at that point to become a prosecutor and to change the way that non-lawyers view the function of the prosecutor, especially in the minority community.

What/who were you most influential classes/professors related to that interest?

What solidified my interest in criminal law did not come from any specific class, but more so from the countless hours spent with Professor Beth Belmont as part of W&L’s Black Law Student Association Mock Trial Team.  Professor Belmont did not just teach me the rules of evidence.  From her, I also learned how to be an effective, persuasive, and strategic litigator.  A lot of what goes into litigation is confidence, and with Professor Belmont’s help, I have become much more confident in my ability to be a great prosecutor.

Where will you be working following graduation?

In September of this year, I will be joining the Kings County District Attorney’s Office in Brooklyn, New York as an Assistant District Attorney.  I am very excited to join this office under District Attorney Kenneth Thompson, who is changing the way in which the public views prosecutors nationwide.

In what ways did the school help with your job search and success?

The Office of Career Strategy played an important role in my job search and ultimate success.  In the spring of last year, three classmates and myself approached Dean Cliff Jarrett with the hope of securing funds to attend the Black Prosecutor Association Job Fair in Phoenix, Arizona.  Dean Jarrett was able to provide our air fare to the job fair, where I had my first interview with the Kings County District Attorney’s Office.  Being able to attend that job fair, in my opinion, put me in a favorable position during the interview process.