Paul Judge went to the College of William and Mary in Williamsburg, Virginia and commissioned as a 2nd Lieutenant out of ROTC. He is now a 1stLieutenant in the United States Army. He plans to enter the JAG Corps after graduation. At W&L, he is a Lead Articles Editor on the Washington and Lee Law Review. After graduation, he will be clerking for Judge Margaret Ryan on the Court of Appeals of the Armed Forces, a federal Art. I appellate court in Washington, DC. 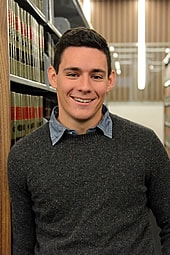 I applied to the Army’s 2L intern program. I am an Army officer and obligated to serve in the Army post-graduation.

Developing strategies in the courtroom; advising commanders on military justice matters; witnessing attorneys in Secret-Classified environments conduct operational law exercises (basically telling commanders whether or not they can drop a bomb on a target); legal research and writing.

Criminal Law, Evidence and Criminal Procedure, mostly. Virtually everything we did was either criminal law under the Uniform Code of Military Justice (UCMJ) or administrative law under other army regulations. My experience externing with the Army JAG Corps Trial Defense Services the previous summer at Fort Hood was invaluable.

The sheer amount of evidence and procedure necessary to bring a trial to court-martial surprised me. The entire process took months and months, even years, between the actual criminal conduct that occurred and the trial itself. I underestimated how difficult it was to get evidence to be admitted and to use it at trial. We had tons of people come in accusing other people, but so much of that was inadmissible, or we wouldn’t be able to get them to testify, or they weren’t specific enough… And so on. Getting evidence to use at trial is way harder than I thought it would be.

I already knew I wanted to be a JAG. In fact, I have to be, I am contractually obligated. It has, however, helped me develop a plan for managing my career in the Army; where I want to be stationed, what kind of jobs I want, etc.

I am taking the Poverty Law Practicum in the Spring. The consumer fraud issue I worked with was highly concerning to me. Here was a soldier who had been fraudulently exploited by her husband, who opened a credit card in her name. As a result, she ended up racking up tons of credit card debt. She had very few options when she walked in the Legal Assistance office for help. If we didn’t help her, that was it; she would be unfairly on the hook for thousands of dollars. That scenario opened my eyes to the issues that many people face without adequate legal redress. I want to be in a position to help people like that in the future.