Catherine Simpson Wins Elmes Pathfinder Prize in Psychology The prize recognizes a student who has shown extraordinary promise in psychological science through outstanding scholarship in basic or applied psychology.

By Washington and Lee University
November 1, 2017

“Catherine is essential to my research program at this point. Not only does she run the lab efficiently and effectively, but she also brings her own good ideas and perspectives to the design of the research studies.” 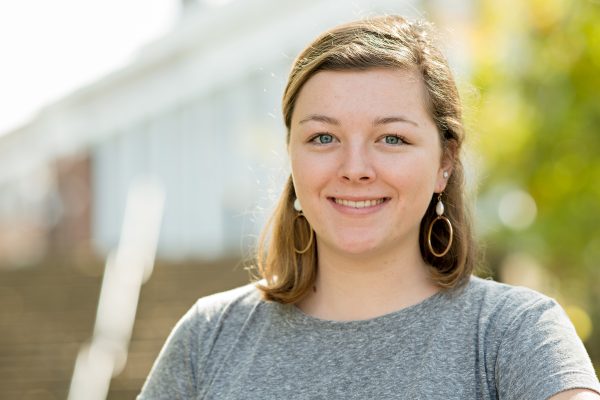 Catherine Simpson, a Washington and Lee University senior from Richmond, Virginia, has received the 2017 David G. Elmes Pathfinder Prize in Psychology. The prize recognizes a student who has shown extraordinary promise in psychological science through outstanding scholarship in basic or applied psychology.

Simpson, who is majoring in psychology with a minor in creative writing, has been a member of psychology professor Megan Fulcher’s Gender Development Lab since her freshman year. The Gender Development Lab investigates the impact of gendered toys on children’s self-efficacy, abilities, and views of future family roles. Simpson currently serves as the lab’s participant coordinator, recruiting and coordinating participants for the lab’s IRB-approved studies in addition to helping develop and pilot new studies. She also has continued her research in the lab over the past two years as a Summer Research Scholar.

“Catherine is essential to my research program at this point,” said Fulcher. “Not only does she run the lab efficiently and effectively, but she also brings her own good ideas and perspectives to the design of the research studies. She is deeply involved in our lab’s science education community outreach events and has a natural rapport with children. I am very excited to see where Catherine’s path leads her, though she will be sorely missed here.”

Among the research projects in which Simpson has participated is an investigation into the possible impact of Barbie as a role model for girls in STEM fields. This study was inspired by the recent internet rediscovery of “Barbie: I Can Be a Computer Engineer,” a book produced by Mattel in which Barbie is supposed to be a computer engineer but gives her laptop a virus and must ask her male friends for help.

The book was rewritten by feminists in order to portray Barbie in a more positive light, and study participants are assigned to read either the original book or the edited version. They then learn some computer engineering using a program called Scratch, and must choose how to divide their time between a make-up app and practicing their new computer programming skills before making their own program and responding to a series of sexist vignettes. Through this project and others, Simpson has become proficient at video-coding using ELAN software and has improved her SPSS data entry and manipulation skills.

As part of her honors thesis, Simpson is currently launching her own study examining the traditional and non-traditional scripts that children use during imaginative play with Barbie and other dolls. She hopes to discover whether more diverse Barbie dolls and Barbie media could lead to a greater range of career and non-traditionally feminine scripts and themes in children’s play.

Outside the psychology department, Simpson works part-time as an applied behavior analysis clinician with Compass Counseling in nearby Buena Vista. In this role, Simpson works in-home with children on the autism spectrum using applied behavioral analysis techniques. She is also deli manager and communication committee member for the Washington and Lee Chapter of FeelGood, a youth-led non-profit dedicated to ending extreme poverty by 2030. She is a member of Psi Chi Psychology National Honor Society and is the psychology chair for WITS, a club that encourages local middle school girls to explore STEM subjects.

Simpson’s post-graduate plans include further exploring her research interests as a research assistant or in a more clinical environment before applying to graduate school.