“The conversation with Jim Arnold and Clayton Eshleman touches upon the linguistic and cultural barriers that exist in translation and adds another dimension to our conversation about borders.” 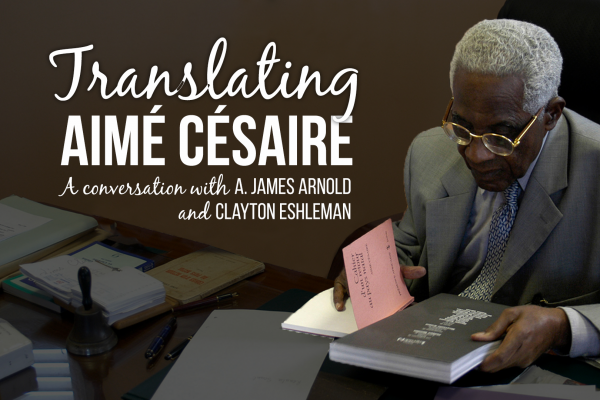 Washington and Lee University’s Center for International Education presents Translating Aimé Césaire: A conversation with A. James Arnold and Clayton Eshleman. The talk is Sept. 19 at 5 p.m. in the Kenneth P. Ruscio Center for Global Learning. It is free and open to the public.

Césaire has been called the outstanding voice of the 21st century and is known as an imposing figure in the study of the African diaspora, Caribbean literature, and post colonialism.

“We are thrilled to kick off the second year of the Colloquium on Borders and their Human Impact,” said Mark Rush, Stanley D. and Nikki Waxberg Professor of Politics and Law. “The conversation with Jim Arnold and Clayton Eshleman touches upon the linguistic and cultural barriers that exist in translation and adds another dimension to our conversation about borders.”

James Arnold is the lead editor of Césaire’s complete works in French. The newly released book by Arnold and Eshleman is considered the definitive bilingual edition of Césaire’s poetry. Arnold is emeritus professor of French at the University of Virginia.

Clayton Eshleman is the author of over 100 books and is the major American translator of Césaire. Eshleman received the National Book Award for his translation of the poetry of César Vallejo. The Poetry Foundation describes Eshleman as “one of America’s foremost translators and poets.”

During his visit, Eshleman will also meet with the creative writing faculty at W&L and with Professor Seth Michelson’s class on Spanish-American poetry.

The event is sponsored by the 2016-18 Center for International Education Colloquium on Borders and Their Human Impact with the generous support of the Andrew W. Mellon Foundation and the University Library. The colloquium addresses the concept of borders and border crossings from a variety of perspectives that tie humanity to political, geophysical, physiological, epistemological and spiritual borders.

The talk will be streamed live online at https://livestream.com/wlu/aime-cesaire.