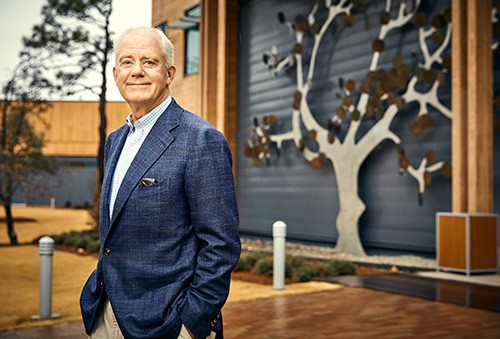 James “Chip” Mahan ’73, CEO and chairman of Live Oak Bank, has been celebrated in his home city of Wilmington, North Carolina, as the region’s most accomplished entrepreneur from the past 10 years.

Mahan, who graduated from Washington and Lee University with a degree in economics, was featured in a May 2018 story on WECT-TV (Channel 6) and on the “1 on 1 with Jon Evans” podcast. In addition, on May 23, Mahan delivered the keynote address at the 2018 Coastal Entrepreneur Awards, an annual event held by the Greater Wilmington Business Journal and University of North Carolina Wilmington’s Center for Innovation & Entrepreneurship.

Mahan launched his career at Wachovia, later becoming chairman and CEO of Citizens United National Bank and Trust Company. In 1992, as CEO and chairman of Cardinal Bancshares, he took that company public. A few years later, he and his brother-in-law launched Security First Network Bank, the world’s first internet-only bank. That company sold four years later, by which point Mahan was CEO and chairman of S1 Corporation. Live Oak Bank was founded in 2005.

In the WECT interview, Mahan credits smart hires and quality customer service with his success: “If you hire like-minded folks, the last thing in the world they will do is let a teammate down,” he said. “Then if you continue to treat every customer like the only customer in the bank, the shareholder is going to be just fine. Then success begets success.”