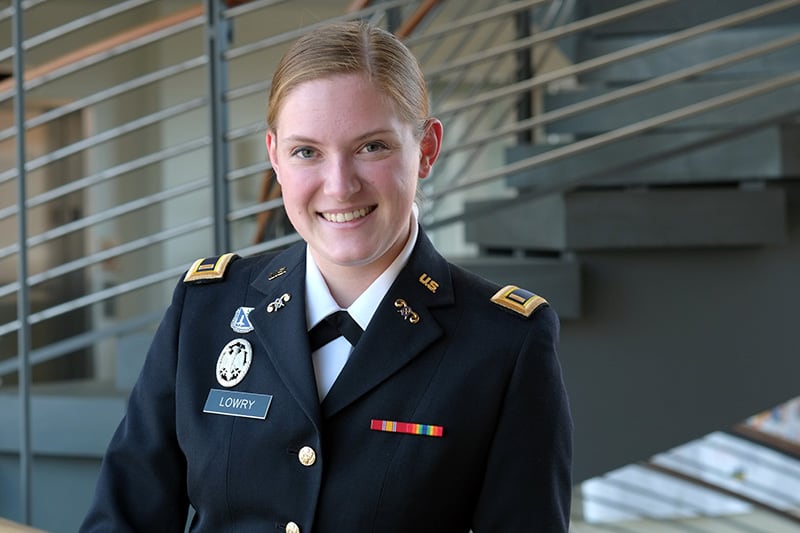 Six months after graduating from W&L, 2nd Lt. Christina Lowry ’14 is looking for an apartment near Fort Drum, about an hour north of Syracuse, New York, and just a few miles from the Canadian border. “I’m willing to pay a couple of hundred more per month for a garage just to make sure the car will start in the morning,” she said. The week she began her search there was seven feet of snow on the ground, so a garage seemed particularly appealing.

Lowry is preparing for life in the U.S. Army Chemical Corps at Fort Drum, where, for the next two years, she’ll be a chemical officer for a helicopter unit. “At 22, the Army has put me in charge of $1 million worth of equipment and 20 to 30 people,” said Lowry. “My job is to train my unit to respond to a chemical, biological or nuclear attack, but since no one has hit us with any of those in decades, I’ll be sitting in a corner doing paperwork. Most of that will include assisting with plans and operations, as well as keeping the unit’s status report up to date. I’m responsible for every person and every piece of equipment under my command. I have to hope 18-year-old Private Snuffy doesn’t lose his canteen or rifle in the woods, because I have to account for all of it.”

It seems a long way from the ivy-covered walls and white columns of her alma mater, but Lowry says her double major in German and religion, as well as the many politics classes she took, primed her well. “So much of my W&L education was learning how to analyze, how to think critically, to make the connections.” She referred to Gen. George C. Marshall’s maxim that the U.S. must always be prepared for the next war. “As an officer, as a leader, I need to be looking ahead at both the global picture and my unit. If I sense there’s something not right with one of my men, I need to solve it before it becomes a bigger problem. When I watch the news, I’m paying attention to any country that’s showing signs of economic, religious or political unrest and thinking about the terrorist group that’s most likely to react to that situation. Will this become a problem for us now or in 10 years?”

Lowry grew up in Stuttgart, Germany, where her parents were teachers for the Department of Defense at the U.S. Army base. She joined high school JROTC so she could compete with the rifle team. “I ended up doing so well I became second in command of my unit. My instructors encouraged me to apply for an ROTC scholarship, and getting one made it possible for me to attend W&L.”

At W&L, she joined Pi Beta Phi; won a 2013 American Translators Association Award for her translation of the German musical “Elisabeth”; wrote an article for W&L’s Political Review on the political tension surrounding Muslim immigrants in Germany; wrote a paper for her capstone course on chaplains in the military; and worked in Lee Chapel. At VMI, she fired M-16 rifles; flew in a UH-60 Black Hawk; navigated obstacle courses; took classes on leadership; traveled to Tanzania and Germany on ROTC summer programs; and served on the Dining In committee.

“It was bit of a challenge, bouncing back and forth between the two different worlds,” Lowry admitted. “My sorority sisters always cracked jokes when I came to dinner in a sweaty uniform after I’d been out in the field, and at VMI, the cadets eventually stopped staring at the girl in the sundress walking through the dining hall. It was a transition, but that’s what being in the Army is all about — your success depends on how well you can roll with the punches and how quickly can you adapt.”

Lowry is required to serve in the Army for four years and can then move into the reserves or the National Guard for another four years, unless she chooses to stay in the military. “I’m a little bit jealous of my National Guard friends who have homes and families. They have more stability in their lives. Right now, I don’t know how I’ll feel about staying in the Army. There are a lot of ifs — if I get married, if I have kids, where I’m stationed. But this is a great way for me to begin life right out of college. I get a lot of training, I get to see the world, and I have access to educational opportunities that the Army will pay for. I’m just getting started.”