Classmates Lead Fundraising Effort to Remember Kathy Boozer Boone ’95 In honor of what would have been her 25th reunion, Boone's family and friends celebrated her legacy through gifts that will have a tangible impact on W&L.

Kathy Boozer Boone ’95 was known for her inexhaustible energy, contagious enthusiasm and fierce loyalty. She left a lasting impression on her friends and classmates, and that legacy will have a tangible impact on Washington and Lee.

Boone passed away in 2018 after battling aggressive breast cancer, and in celebration of what would have been her 25th reunion, her husband Brian and daughters Lindsey and Lillie established the Kathy Boozer Boone ’95 Business Administration Endowment. They also made a generous contribution to the Center for Academic Resources and Pedagogical Excellence (CARPE), the fundraising project for the Class of 1995’s 25th reunion. Their gift set in motion a labor of love from some of Boone’s closest friends and classmates who served on the 25th reunion committee.

Alumni rallied around raising funds to supplement Brian Boone’s gift to CARPE, recently renamed the Houston H. Harte Center for Teaching and Learning, to name a gathering space within the center after Boone. Liz Holleman Brown, Dana Cornell MacNaughton, Frost Bush Osborne and Leslie Ratz Easterling, members of the Class of 1995 who were also Boone’s Kappa Kappa Gamma sorority sisters, led the charge, raising more than $160,000. Between support for the endowment and the Harte Center, Boone’s legacy will make a powerful difference at W&L.

“I feel proud that we achieved such great success during a tough time. I know Kathy would be equally proud.”
~Liz Holleman Brown ’95

Brian Boone shared that his late wife had a goal to create an endowment to benefit the Williams School, and that he and their girls were honoring her intentions. “We are helping to keep her amazing spirit alive in the W&L community that she loved so dearly,” he said.

Brown said Boone had a great affection for her professors as well as a deep appreciation for the influence they had on her. “Kathy’s time in the C-School simply needs to be remembered with the Kathy Boozer Boone Business Administration Endowment” Brown said. “I can’t imagine there will ever be a bigger cheerleader for the C-School than Kathy.”

Brian Boone recalled stories about his wife spending time in the library, more to connect with people than to study, and he knew she would want to support the class reunion project. His generous contribution offered a special opportunity for Boone’s classmates to remember their friend with a named space on campus and support the class project at the same time. The opportunity celebrated Boone’s friendliness and ability to build bridges that linked people across backgrounds and generations. “The teaching and learning center seemed like a natural fit, given that it will bring students and faculty together,” MacNaughton said.

Despite a global pandemic, the cohort enjoyed fundraising success. After exceeding a $50,000 goal in May, MacNaughton, Easterling, Brown and Osborne decided to reach out to others at W&L outside the Class of 1995 who were close to Boone. Donors spanning three decades, as well as parents, supported the effort. After more than doubling its goal, the group is delighted that Boone’s name will appear prominently in the Harte Center for Teaching and Learning gracing both a gathering space and the leadership donor recognition plaque. “I feel proud that we achieved such great success during a tough time,” Brown said. “I know Kathy would be equally proud.”

Osborne attributed the effort’s landslide success to Boone. “I believe a lot of it was inspired and fueled by Boozer Boone’s light and life,” Osborne said. “I don’t have a competitive bone in my body, but we all know how competitive Kathy was, so I channeled her to rally the troops to reach that higher goal as she would have herself.”

In addition to her Kappa Kappa Gamma affiliation, Boone played varsity basketball and was on the Fancy Dress planning committee. After graduating with a degree in business administration, she went on to lead a successful career in banking. She was an active alumna, serving on the Alumni Board and on reunion committees, volunteering for the Alumni Admissions Program and engaging in the Charlotte Alumni Chapter, undertaking regional fundraising for the Rising Generation capital campaign and participating in the Business Plan competition as a judge, among many other activities. In 2005, she was recognized with the Distinguished Young Alumni Award. “The night I met Kathy, she proudly told me that she went to W&L. Our third date was a W&L event at the Piedmont Driving Club in Atlanta,” Brian Boone said. “W&L was part of her DNA.”

Boone was a passionate Clemson football fan and cheered on her team in person as often as possible. She was active in her local community and was on the board of directors for a local Charlotte nonprofit, Baby Bundles, and on the board of trustees for the Charlotte-based ECHO Foundation. Boone’s family established the KBB Foundation to continue her important work in the Charlotte area.

Osborne wrote a 25th reunion Calyx entry on Boone’s behalf, and in it, mentioned that Kathy had a vivid memory of the Honor System presentation during their first-year orientation in Lee Chapel. It had a lifelong impact on Boone. Osborne wrote: “Perhaps it is because Kathy herself felt the Honor System deeply and lived it personally and professionally.”

The Kathy Boozer Boone ’95 Business Administration Endowment is the first undergraduate faculty support endowed fund at W&L named for an alumna. Located in Leyburn Library, the Harte Center will bring people and ideas together to advance W&L’s core academic mission.

“I think we all agree that Brian helped strike the perfect balance between celebrating Kathy’s love of the Williams School and her devotion to the Class of 1995,” Brown said. 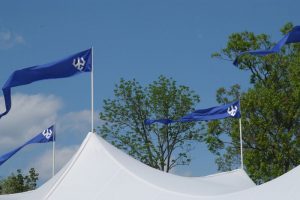 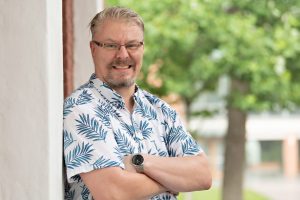