Community Projects a Win-Win for Lexington and W&L Washington and Lee University's Office of Community-Based Learning has partnered with Lexington on projects that provide real-world learning experiences for students while also advancing the city's goals.

“We are always aiming for projects that not only provide learning experiences for the students but that also advance the work of the community partner. Our office is privileged to play a role in cultivating a relationship with the city based on a tone of respect, collaboration and open communication.”

When Lexington’s housing commission wanted to conduct a comprehensive study of rehabilitation needs in five of the city’s neighborhoods, a team of Washington and Lee sociology students spent the year collaborating with city officials to produce a major report on housing conditions.

That report, which was submitted in April 2018, is one example of the burgeoning collaboration between the city of Lexington and Washington and Lee’s Office of Community-Based Learning (CBL). 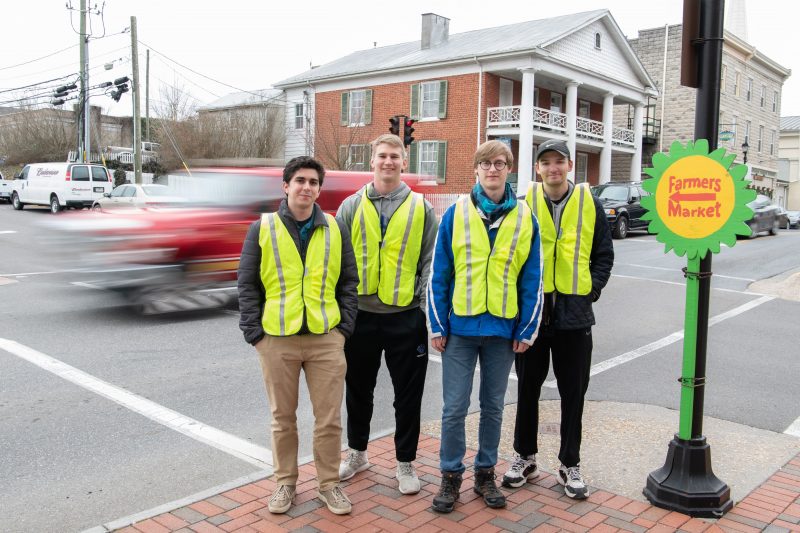 Alessandra Del Conte Dickovick, assistant director of Community-Based Learning, and CBL Coordinator Emily Kohl are the program’s “matchmakers,” pairing W&L faculty with community partners. The goal is to create long-term partnerships by cultivating projects that will build upon one another year after year.

“We are always aiming for projects that not only provide learning experiences for the students but that also advance the work of the community partner,” said Dickovick. “Our office is privileged to play a role in cultivating a relationship with the city based on a tone of respect, collaboration and open communication.”

The housing study epitomized that tone. The five students in Professor Krzysztof Jasiewicz’s class on The Art and Science of Survey Research created and conducted a survey of five Lexington neighborhoods. Residents in those neighborhoods were deemed most likely to meet the low- to moderate-income requirement of the Community Development Block Grant program and might qualify to apply for home repairs.

Working with Threshhold, Lexington’s 30-year-old housing commission, the student team administered its survey throughout the winter of 2017 and presented its findings to Lexington’s City Council in an 80-page report, which drew praise from city officials.

According to a story in the Lexington News-Gazette, Lexington councilwoman Marilyn Alexander called the study’s findings “eye-opening” during the council meeting. “The students did a phenomenal job,” she said. “We [housing commission board members] were amazed at the feedback. It validated what we thought.” Alexander said the report was sobering because of the “menagerie of needs” that were uncovered.

Jasiewicz was also impressed by the quality of his students’ work. He was especially pleased with the team’s ability to alter its plan by shifting from an in-person survey method to a mail-in questionnaire.

“Once we found that the original plan of interviewing face-to-face was completely impractical, the students were able to adapt and get a good response rate with the mail-in survey,” he said. “The fact that this was a community-based survey provided added value for the students. There was clearly a motivating factor because they were working with the Lexington community.” 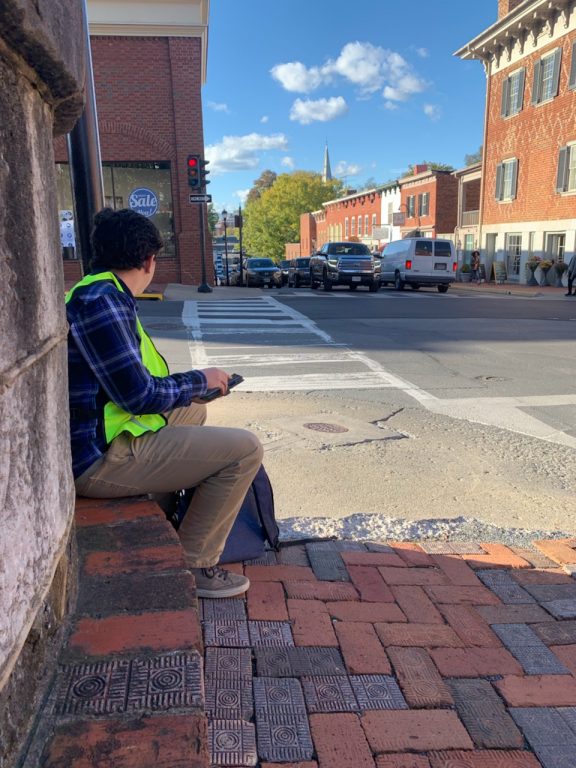 For Julia Hernandez ’20, the combination of hands-on experience and interactions with the Lexington community made the class one of her favorites at W&L. A double major in sociology/anthropology and French from Columbia, South Carolina, she plans to go into public policy and community-based work.

“This was my first time being involved with a class that did anything in the city of Lexington, and it was awesome to see that we, as students, could give back to Lexington in this way,” she said. “Our conversations with the residents went beyond the survey. We talked about their lives, how long they’d been in Lexington and what they did. It was really a wonderful opportunity.”

Jasiewicz said the students benefited from working with city officials in a number of ways. These professionals provided not only technical and logistical assistance, but gave contextual background on the city and offered crucial guidance and feedback throughout the survey process. Those contacts with city officials underscore the collaborative nature of the relationship that is prized by Dickovick and Kohl in the CBL office.

The reciprocity that CBL emphasizes is also evident in the two engineering projects that have been underway during the current academic year. The city benefits from the students’ findings while the students tackle real-world problems.

Joel Kuehner, professor of physics and engineering, said connecting the department’s Capstone Design courses with the Community-Based Learning program has been a natural fit. The course is designed to be a practical experience where students take an initial idea all the way through testing phases to a final recommendation or a prototype. The problems posed by the city, said Kuehner, represent ideal challenges for the students to take advantage of what they’ve been learning.

“It’s one thing to sit in a classroom and learn from a faculty member, but it’s quite different to sit across from a city official and to hear about the problem they want solved and the constraints, like budget, that are involved,” said Kuehner. “The feedback from someone who heads a city department and can actually implement whatever plan the students develop raises the stakes.”

Giovanni Esposito ’20, an engineering major from Goochland, Virginia, is part of the traffic study. During the fall semester, when he was working on the project, Esposito had a job interview with the Virginia Department of Transportation (VDOT).

“They looked at my resume and saw the traffic study and said, ‘Wait. You’re doing that kind of work for the city of Lexington now and you’re an undergrad?’ They were impressed,” said Esposito, who starts with VDOT this summer.

In CBL courses, the community partners with whom the students and professors work, including those from the city of Lexington, are active collaborators and “coeducators.”

“Everyone brings value to the table,” said Dickovick. “Often our community partners are investing a lot of time in the students. Working with W&L students may not be part of the mission of these organizations, but they invest their time and share their expertise with our students nonetheless.”

The spirit of collaboration and respect was apparent during a public presentation of the Engineering Capstone Design projects in December. When the student teams conducting the two projects with the city — the downtown traffic survey and the Lime Kiln Bridge study — made their presentations, Jeff Martone, the city’s public works director, was in the front row. 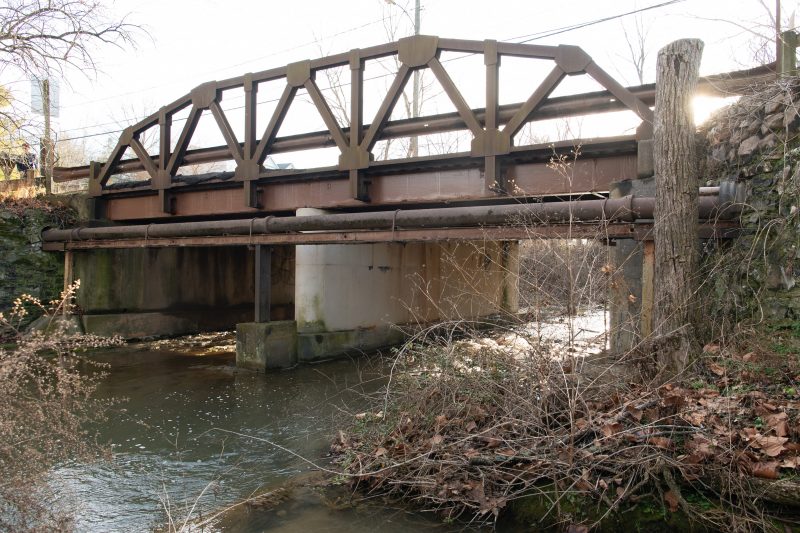 As part of a collaboration between W&L’s Office of Community-Based Learning and the city of Lexington, W&L engineering students assessed the structural health of this bridge that traverses Woods Creek.

“I was obviously curious about what they’d come up with,” Martone said. “I’d encouraged a traffic study for a couple of years, so I’m glad we could get one underway with this program. As for the bridge, I’ve never been involved with the kind of load-testing the students are trying, so I was eager to compare their assessment of the structural integrity versus what VDOT found with its latest visual inspection.”

After each presentation, Martone offered continued assistance as the students pursue their work in Winter Term. He invited the bridge team to participate in an inspection of all the city bridges later this year and told the traffic team he was prepared to test even their preliminary recommendations.

The traffic study team combined manual traffic counts with computer simulations to conclude that modest changes in the timing of the stoplights at the intersections of Nelson Street with Main and Jefferson streets could significantly reduce travel times in both directions. They reported that the impact of such changes would be impressive: Not only would traffic move more quickly, but there would be a quantifiable reduction in both fuel costs for motorists and CO2 emissions.

After appearing before the Lexington City Council to present the housing team’s report, Hernandez remembers thinking what a rare opportunity she and her colleagues had to work one-on-one with members of the community.

“It’s an experience you couldn’t get just anywhere as an undergrad,” she said. “I think it’s important for every W&L student to do something like this. As students, we have a duty to know what the issues are in this community because we’re so lucky to be here for four years.”