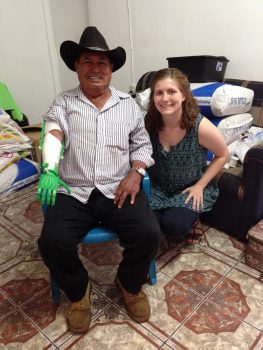 “Peace is traditionally defined in terms of war and violence,” explained Shuler, a biochemistry major. “But, it can mean so much more. There is a mental peace that comes with knowing that you and your family are safe and secure, have a place to live, have food on the table, and that you are able to provide a happy future for those you love. When a tragic event takes away an arm, it does not just take away the physical arm. It leaves a questionable future, especially in a country like El Salvador with limited resources and support in the field of prosthetics.”

Over the past four summers, Shuler has worked in El Salvador with local clinics to provide better health-care to the community, “but I always wanted to do something more,” she said. While studying abroad her junior year in Morocco, the light-bulb moment occurred during a conversation Shuler had with a friend about new technologies. “He wondered why no one had started using 3D printers to make prosthetics. I started doing some research and found the Roboarm open-source model that others had been working on and knew this would greatly benefit amputees in El Salvador. When I returned to W&L in the fall, I discovered that the University had created the IQ Center and had purchased a Makerbot 3D printer, so I was able to learn how to use it.”

After Shuler collected her diploma, she headed to Ahuachapán, a city of about 110,000 residents on the western edge of El Salvador, an agricultural region producing coffee. With a $10,000 grant from the Davis Foundation Projects for Peace, she and her team (W&L students Alessandra Catizone ’15 and Eleanor Jones ’15 and her brother, Andrew Shuler, a biomedical engineering student at the University of South Carolina) purchased a Makerbot Replicator 5th Generation 3D printer, as well as a few supplies, including screws, nuts, string and thermoplastic.

Shuler worked primarily with Carla Clavel, a nurse at the Clinica Iglesia Metodista clinic. The first week, the team met several patients and chose José to begin. By the end of the week, they sent José home with an arm. By the end of the summer, they completed five more arms. Clavel finished several more after they left. The cost? About $60 to $80 each.

“Unfortunately, amputations are common in El Salvador,” said Shuler. “Some come from accidents or violence. Many come from medical conditions. It is often cheaper for a hospital to amputate a limb rather than treat a complicated condition. Each of our patients had a very different story. Several had had their amputations for years, resulting from the civil war or gang violence. A few had tried prosthetic arms before, but they were expensive to replace later. Two patients were out of work because of their amputation. Fortunately, after receiving the arms they have been able to find new jobs. One of those patients, Urania, invited us to her home a few weeks after fitting her arm to show us tasks she could complete around the home using the arm. Having a second hand allowed her to cut vegetables and sweep. She could pick up small objects. The prosthetic arm will never replace her original arm, but it allows her to perform basic chores more easily. It also means she can work again to help support her family.”

As with any new project, there were challenges. One of the parts on the 3D printer, the extruder, had to be replaced four times throughout the summer, meaning the printer only functioned for half of the time. Another main challenge came from the inherent uniqueness of each amputation. “Although we had an overall plan for making the arm, each individual was different, and we had to adjust to each situation. We never gave up on a patient, we just needed more time for one than we did for another,” noted Shuler.

Even though Shuler had to leave El Salvador for her next project-teaching English in Shanghai-the work goes on through the efforts of others. The group left enough supplies for Clavel to make 20 more arms, and Shuler’s brother will print more parts in the U.S. and send them to her via mission teams traveling to El Salvador every two months. Moreover, Shuler has developed several fundraising ideas to continue building low-cost prosthetic arms for patients in El Salvador and other South American countries. She hopes to expand the program to provide prosthetics for those with amputations above the elbow and eventually begin construction on prosthetic legs.

“This project has definitely shaped the way that I see the world and my ability to affect it,” said Shuler, who will attend the Medical University of South Carolina next year. “I have always had a passion for both medicine and development in the U.S. and abroad. Throughout this project, I took everything that I learned in El Salvador in the past and everything I have learned about technology and science at W&L and combined them to create a lasting impact. My experience working in El Salvador with 3D printing and prosthetics has only just opened the door to what will hopefully be a lifetime of using technology and creativity to improve the lives of others.”