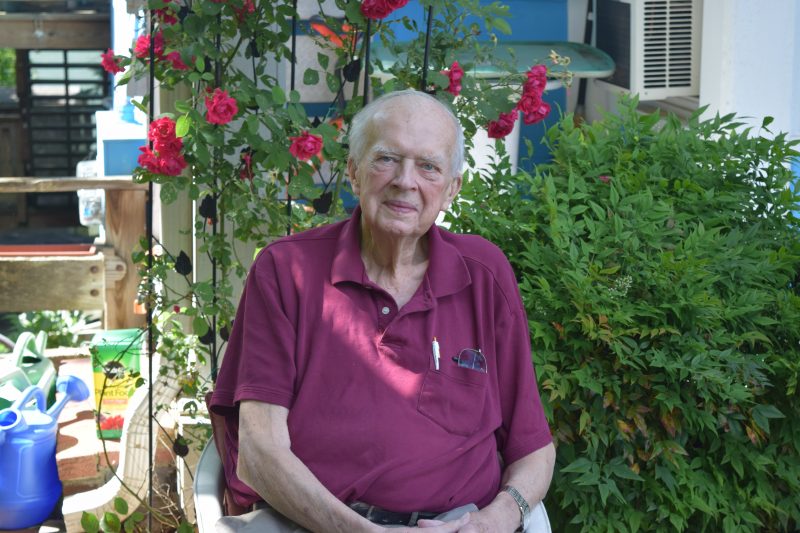 “The A-hour Dickens section of Elementary German began officially at 7:55 a.m., right at the conclusion of the 7 a.m. office hour. Stragglers who arrived at 8 a.m. found their classmates already hard at work.”

David B. Dickens, professor of German emeritus at Washington and Lee University, died on Jan. 9, 2019. He was 85.

As well as teaching all levels of conversational German, he taught German literature of the 17th and 18th centuries, German cultural history, and literature of the fantastic. His research interests included Kurt Kusenberg, whom Dickens described as “the 20th-century German existentialist with a sense of humor”; Clemens Brentano, a key figure of German Romanticism; and vampires.

On the occasion of his retirement in 2007, his colleagues noted in a tribute written by Roger Crockett, professor of German, that many of W&L’s “successful German majors started their careers with the Dickens Breakfast Club. The A-hour Dickens section of Elementary German began officially at 7:55 a.m., right at the conclusion of the 7 a.m. office hour. Stragglers who arrived at 8 a.m. found their classmates already hard at work. It was not an environment for fraternity revelers, especially on Thursday morning when there was reliably a quiz, but it was a locus amoenus for the serious language learner.”

Dickens was a prolific scholar, publishing “Negative Spring: Crisis Imagery in the Works of Brentano, Lenau, Rilke, and T.S. Eliot,” as well as numerous articles and translations of German short stories, poems and articles. He served as acting department chair twice and was a member of the Graduate Fellowship Committee, Writing Across the Curriculum Committee, Foreign Study Committee, Student Financial Aid Committee and Sectioning Committee, which counted class registrations by hand and kept track of them on a blackboard in Robinson Hall.

In the ’70s, as Spring Term became part of the curriculum, he created one of W&L’s first total-immersion language programs using contacts throughout southern Germany, especially at the University of Bayreuth. He considered this his most important achievement: “It enabled any student to gain familiarity with life in a different country.” He also noted that Germany is where he met his wife, who supported him while he finished his Ph.D. dissertation.

Crockett said, “Dave gave the program the name which has stuck: BSW, Bavarian Study Weeks. He also gave it its unique character, which it has maintained: close contact between the W&L instructor and the students, individual home stays rather than dormitory rooms, and the traveling classroom concept, which allows the academic coursework to begin long before arrival in Bayreuth.”

Dickens was also W&L’s resident vexillologist and was instrumental in helping W&L when the university began displaying flags to honor international graduates in 1995, lending many from his personal collection. Flag Day was celebrated in style at the Dickens residence (a.k.a. the Blue House), which hosted numerous students over the years and where only German was spoken.

In Lexington, Dickens was a founding member of the Friends and Relatives of Gilbert and Sullivan, on the board of directors for the Rockbridge Concert-Theater Series, a member of the Lexington Flower Committee and on the advisory board for the Lexington City Schools Gifted and Talented Program. He also designed the official cachet for the first-day cover of the 20¢ George C. Marshall stamp for the George C. Marshall Research Library and Museum. He enjoyed carpentry, reading, philately, cooking, traveling and creating block-cut Christmas cards.

A memorial service will be held in Stackhouse Theater in Elrod Commons on Thursday, Jan. 17 at 3 p.m., with a reception afterward at the Hotchkiss Alumni House. In lieu of flowers, the family requests that donations be made to the Dickens Award at Washington and Lee. Donations can be sent to W&L, c/o Nancy McIntyre in the Development Office.