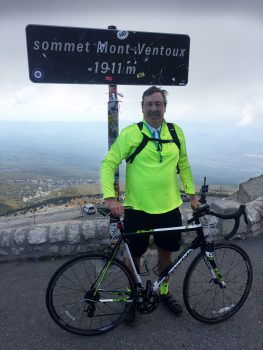 At the summit of Mont Ventoux, France.

According to David Chester, who lives in Sherborn, Massachusetts, retired Generals don’t simply fade away. They roll off the couch, put down the chips, turn off the TV and bicycle across France on a dare.

The 1978 graduate of Washington and Lee University covered 877 miles over 14 days, climbing 65,000 feet — “that’s biking up Mt. Everest twice with some miles left over,” he said.

We caught up with David for a few more details.

Q: What did you do after graduating from W&L?

I served for four years at the rank of lieutenant in the Navy as a surface warfare officer, mine countermeasures officer and naval instructor. I decided to seek my fame and fortune in high tech.

From 1983 to 2006, I was a sales rep, with various fancy titles and enviable expense accounts, in software sales to the Fortune 1000. I managed complex sales campaigns for companies like Control Data Corp., Must Software International, Dun & Bradstreet Software and Baan and Ariba Inc., spanning the computer evolution from mainframe to client/server and, finally, emerging internet technologies.

Q: How long have you been retired?

My retirement date is a bit of a family scandal, because Chesters do not historically take early retirement. In fact, they typically continue working way beyond the age at which any meaningful work can be expected. Often they need to be carried out on a gurney. I broke with tradition and retired at 50 (2006).

My wife, Kimberly, had a similar work history, so we often would say, when pressed, that between us we’d been working for over 50 years, hence we decided it was time to smell the roses. At least that was the polite way of saying it.

So post-retirement, I’ve been a volunteer firefighter and first responder for my town’s fire department, manning Engine # 2, the water tanker. May not sound sexy, but since our town has no fire hydrants, we were very important, because, after all, we had the water. I also serve on various town boards. 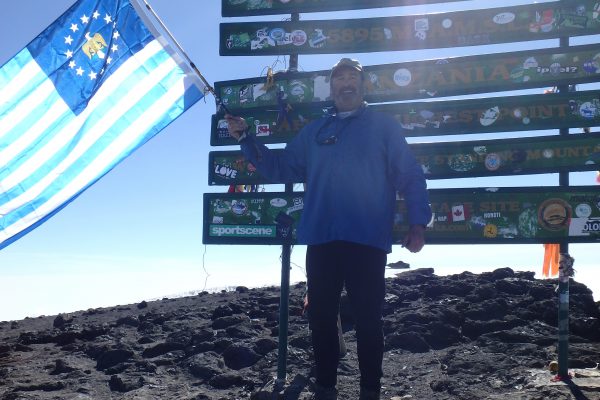 Q: When did the urge to cycle long distances start?

When I turned 50, I decided I needed a physical challenge to commemorate my half-century mark. I chose to climb Mount Rainier (14,410 feet). Not knowing anything about mountain climbing, I begged an older cousin with Himalayan experience to join me.

We both made it to the summit. Thirteen out of 25 in our group didn’t. I was hooked; every couple of years I would do a mini-adventure that pushed me out of my comfort zone.

By 2013, enough time had passed since Mount Rainier for that story to run out of juice. My family started a new mantra, “What’s next?” I began surfing the web for inspiration and decided on the LEJOG, a famous bike ride across Great Britain, from Lands End Cornwall to John O’Groats, Scotland. That took 14 days, 1,000 miles via back roads. I lost 20 pounds on that ride. Our oldest cyclist was a 77-year-old English lord.

I then climbed Mt. Kilimanjaro (19,341 feet), with a mandatory guide service. It’s a trek, but not a technically difficult climb. It does require a sincere desire to summit. The altitude effects people differently, and be forewarned — seven days without a shower makes for a ripe tentmate.

Q: How did you prepare for your personal Tour de France?

I am not a cyclist. I began serious biking with the LEJOG in 2013. So to get ready for France, I rode regularly three to four months prior, ultimately logging in 1,000-plus miles for an anticipated 870-mile cycle and focusing on hill work at every opportunity.

Victory lies in the preparation. Training notwithstanding, I made a name for myself by:

1. Showing up without a bike (I rented one from the tour company — steel frame — which proved to be five times heavier than any of the other bikes. I won’t comment on the bike’s vintage or the gear configuration.)

2. Showing up at a svelte 230 pounds. The leader of the Scottish contingent was delighted to calculate that I was 60 pounds heavier than the average weight of all the other male cyclists on the expedition.

They called me overweight. I called them lightweights.

My compatriots were all Lycra-wearing, bike-club fanatics who could spend an entire evening’s conversation on various proposals to drop an extra half a pound from their cycle kit for maximum speed and efficiency.

I also confess that I added to their disbelief by exaggerating the extent of my training. I told them I never got around to it.

Q: Who dared you to make the trip?

It was a wife-son-daughter tag team. My 30-year-old daughter arrived from Los Angeles and convinced everyone in the house that if I didn’t lose weight and get back in shape, I would be dead in a year. She is an actor, and through repetition had the whole house planning my funeral, never mind the fact that a recent physical had given me a clean bill of health.

Finally, my 16-year-old-son dared me with the shameful taunt, “Middle-age white guys can’t jump or pump” (as in pumping/pedaling a bike cross country).

Q: Will you do more of these cycling trips?

Funny you ask, because riding long-distance is a grind, no matter how beautiful the scenery, especially if you’re doing it for 14 days, seven to nine hours in the saddle, with no down days. So the evening of day eight, it was the general consensus of the group that no one was going to do another 14-day ride. Never! Of course, after we finished and were celebrating on the beach in Nice, toasting each other with fine French Champagne, everyone was talking about the next big ride. 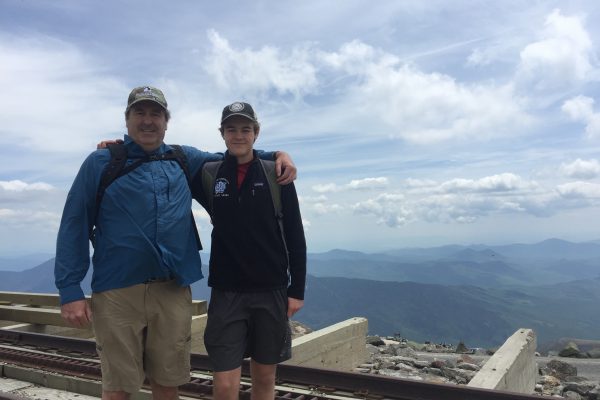 David Chester ’78 with his son, Ben, on the summit of Mount Washington.

Q: What’s your next adventure?

I want to Telemark hut-ski from Vail to Aspen. I know my limits — I will need a guide, an avalanche beacon and a SAT phone. But if the idea can capture your imagination, the logistics and training will take care of themselves.

Maybe I’ll dare that 16-year-old son, who is now 17 (and hoping to attend W&L), to join me. But are the millennials as mentally tough as the baby boomers? Frankly, I don’t think so, but I guess my millennial deserves the chance to prove me wrong.