“Creating and leading the team for the DBF competition has not only been the highlight of my college career, but one which has taught me how hard it is to teach engineering, manufacturing, and entrepreneurial skills only in the classroom.” 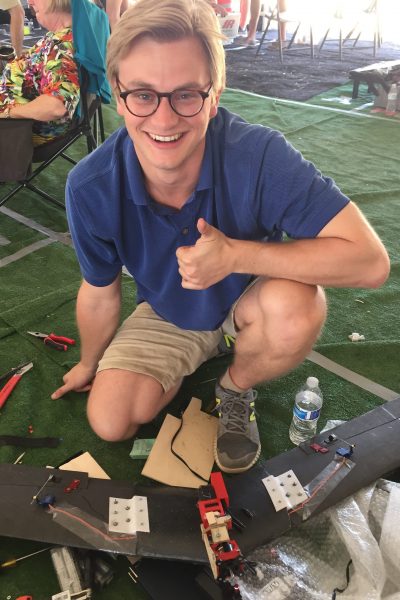 One of the reasons I chose W&L was the small class sizes and intimate relationships students have with their professors. Because W&L is not a large institution, professors are able to dedicate a lot of attention to furthering the education of their students both in and out of the classroom. Having professors as an accessible resource has been instrumental to my education at W&L, and most notably my founding and leading of our team for the Design Build Fly – “DBF” – Competition.

DBF is an international engineering competition hosted by the American Institute of Aeronautics and Astronautics in which universities build remote-controlled aircraft to accomplish a set of missions. At the end of April, the teams meet up and fly their aircraft for the missions, and are scored based on their performance.

The first year we competed was a roller coaster. We had great faculty support, but our lack of experience hurt our competitive edge. Although we finished the construction of our airplane, I was unsatisfied with our performance and, going into my senior year, knew I had one last chance to get it right. With the lessons learned from the 2015-2016 competition, we created a better management structure and established internal schedules. Although we still faced setbacks, the changes we made allowed us to meet all deadlines.

Going into the competition we knew we had to differentiate ourselves in order to effectively compete; with 140 teams, a conservative design could never win. We designed our airplane solely to win and this meant taking calculated risks. We used a flying wing, like the B-2 stealth-bomber, and Carbon Fiber and 3D printed parts. By leveraging the properties of these innovative designs and materials, we were able to achieve considerable weight savings and increased performance.

On Wednesday April 20th, Sarah Troise ’19 and I flew to Tucson and met up with Alex Meilech ’18. When we got to the competition we had a mixture of excitement and intimidation; here, the three of us were surrounded by teams of 20-30 seasoned veterans. Outnumbered as we were, people loved our airplane. 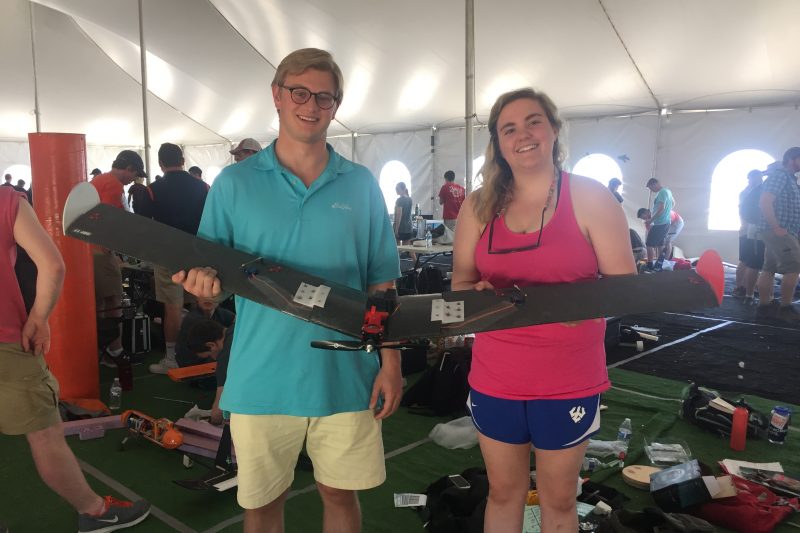 Alexander and Sarah posing with plane

This was the biggest compliment we could have received, yet our burgeoning confidence turned out to be short-lived. Our first launch attempt was a failure and witnessed by everyone who had been praising our design. Nevertheless, we fixed our airplane and readied it for the second launch. Again, failure. Fortunately, our pilot was an “eternal optimist” and recommended we fix our plane, which we did. (Our pilot was incredibly experienced and I would only launch again if he felt it would be safe to do so).

At this point, we were out of spare parts and could only make one more flight attempt. As our pilot throttled up the motor, I threw it as I had always done before and miraculously it took to the skies. Seeing the plane successfully take off and fly was the most incredible and satisfying feeling; it validated our design and meant hundreds of hours of work were not wasted. 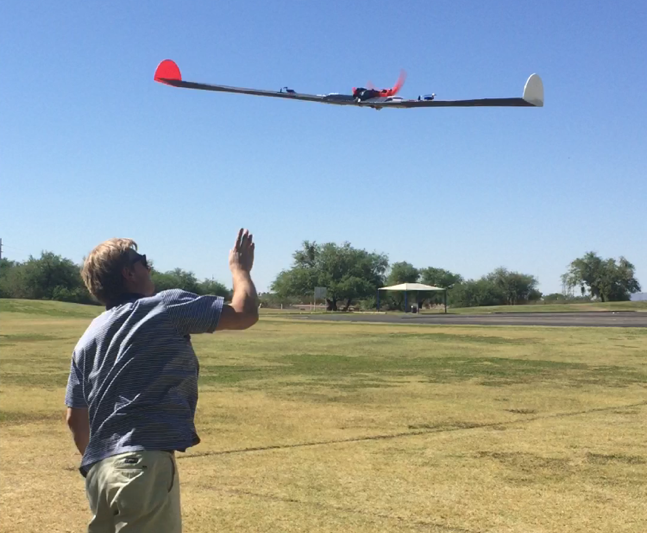 Thanks to the additional design and construction work from Joe Perrella ’17, Eleni Timas ’17, Ryder Babik ’19, and Gianluca Malta ’19 and as a result of the continued faculty support by Dr. Joel Kuehner as well as Dave Pfaff, who runs the IQ Center, our team was a success.

Creating and leading the team for the DBF competition has not only been the highlight of my college career, but one which has taught me how hard it is to teach engineering, manufacturing, and entrepreneurial skills only in the classroom.

A little more about Alexander

Why did you choose your major?
I was really fortunate that my father taught my brothers and I woodworking from a young age. Although none of us ever wanted to be carpenters when we grew up, it inspired us with a love of building. My second interest has always been science. When you combine science and building you get an engineer.

What professor has inspired you?
Dr. Kuehner

What’s your personal motto?
“Never tell people how to do things. Tell them what to do and they will surprise you with their ingenuity.” – General George S. Patton

Best place to eat in Lexington? What do you order?
Kenny’s. Snack Pack with curly fries and a Dr. Pepper.

What do you wish you’d known before you came to campus?
How quickly these 4 years would go by.

Post-graduation plans:
I will be a project manager for a construction company in DC.

Favorite class:
Bio-Inspired Engineering with Dr. Jon Erickson. For this class, my group and I designed and built a robotic stingray. It was incredibly challenging and we spent many late nights together. It was fun to be able to take our engineering skills and put them together to build a robot, something none of us had any experience doing. There are no instruction manuals for how to build a stingray, but together with our professor and building off of the work of students who had previously taken this class, we were able to complete it.

Favorite W&L event:
Mock Con. It’s a shame that students only get to experience it once in their college careers. The parade was so much fun and going to all of the speakers was really great too. It’s always fascinating to be able to hear from such brilliant public speakers, especially in such an intimate setting.

What’s your passion?
Working with people to complete a project. I love designing and building things combined with the challenge of organizing people to do this. For these reasons, I see myself starting a manufacturing business.

What’s something people wouldn’t guess about you?
I like to bake.

Why did you choose W&L?
I chose W&L because it is a liberal arts school. Although I knew I wanted to be an engineer, I was also interested in history, politics, and business and would only be able to take all of those classes at a school like W&L. I also wanted to surround myself with students having diverse academic interests and majors so in the future I could leverage connections with a broad group of people.