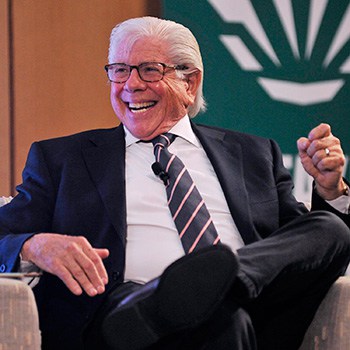 The 15th annual Institute for Honor Symposium, “The Press and the Presidency: The Battle for Public Opinion in War, Peace, and the Digital Age,” will take place Friday, March 18, and Saturday, March 19. The keynote address on Friday, which is free and open to the public, will be delivered by one of the most famous journalists in American history, Carl Bernstein.

Here, courtesy of W&L Class of 1960 Professor of Ethics and Politics Lucas Morel, are five reasons it would be a travesty to skip Bernstein’s lecture:

The Institute will continue on Saturday, with talks by Harold Holzer, winner of the 2015 Lincoln Book Prize for Lincoln and the Power of the Press: The War for Public Opinion, and Toni Locy, professor of journalism and mass communications at W&L, on the press and the possibility of balance in the Age of Obama. While advance registration is required for all sessions but Friday’s keynote, both Holzer’s and Locy’s talks will be broadcast live online.