Washington and Lee University inaugurated William C. Dudley as the university’s 27th president in a ceremony on the Front Lawn of the campus Saturday, Sept. 16.

Inauguration activities kicked off Friday afternoon with a panel discussion on “Liberal Arts and the Professions.” The panel was moderated by Suzanne Keen, dean of the College and Thomas H. Broadus Professor of English. Panelists were Kelly Evans Chemi ’07, representing journalism; William H. Miller III ’72 representing finance; Dr. Harold E. Varmus representing medicine; and the Hon. Gregory H. Woods representing law. The panelists, all of whom received undergraduate degrees from liberal arts institutions, discussed the benefits of a liberal arts education, and the resulting influence on their varied careers. 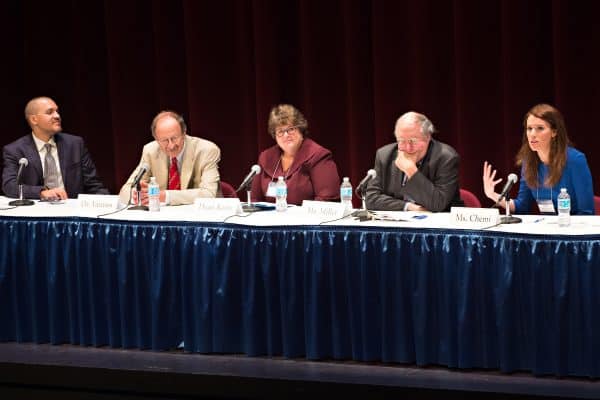 Saturday’s inauguration ceremony began with a performance of “America Singing,” an original composition by Shane Lynch, associate professor of music, and commissioned in celebration of the inauguration. The piece was performed by the University Singers, accompanied by students Bethany Reitsma ’20 and Tiffany Ko ‘20 on the violin, Allie Jue ’20 on the viola and Emma Rabuse ’20 on the cello.

Following introductions by Gregory M. Avis, former chairman of the Williams College Board of Trustees, and Steven G. Poskanzer, president of Carleton College, Dudley addressed the crowd gathered for the ceremony. In his remarks, Dudley built on the foundation laid by Friday’s panel in stressing the importance of the liberal arts in today’s world. 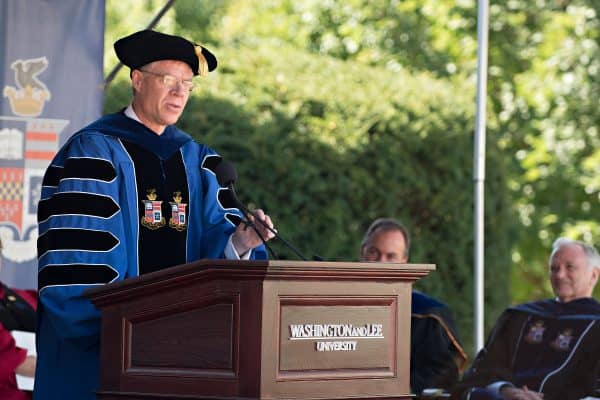 “The main impediments to freedom are ignorance and alienation,” he continued. “Freedom means not being governed by things we don’t understand, by societies in which we are not recognized, by political institutions that do not represent us. Liberal arts education increases our knowledge of ourselves, of the natural world, and of the legal, economic, moral, political, historical, and cultural dimensions of human life.”

In describing the value of a liberal arts education, Dudley said that, “although liberal arts education is the antithesis of job training, it also happens to be the best form of professional preparation. It expands our horizons, develops our capacities, and increases our flexibility. Nothing could be more valuable than that in the 21st century. The liberal arts are not soft and weak but, like the martial arts, devastatingly powerful.

“The problem we face is not that liberal arts education is insufficiently valuable. The problem is that the highest quality liberal arts education is so valuable there’s a moral, social and political imperative to make it more widely available and affordable. This is a challenge of scale that no single institution can solve, but to which Washington and Lee does and must contribute.”

Dudley reiterated the importance of both continuing to work to achieve greater racial and social diversity on Washington and Lee’s campus, and set a goal of raising resources to become “one of fewer than 40 schools in the entire country that practice need-blind admission, while continuing to meet 100% of the demonstrated financial need for every student.” 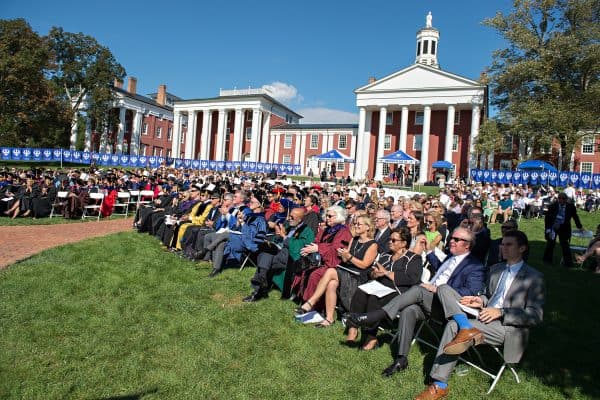 In addition, he cited the university’s role in making an important contribution to the current debates about the ways that the histories of slavery, the Civil War, and segregation are told and memorialized.

“The histories of our namesakes and of our institution and of our nation are delightfully deep and multi-dimensional,” said Dudley. “It is a pleasure, as well as a necessity, to read them slowly, with open minds and an appreciation of nuance, with humility that mitigates against easy judgment, never forgetting that disagreement is compatible with mutual affection, and that respectful conversation facilitates communal cohesion rather than corrosion.”

In closing, Dudley offered a reminder of the enjoyment associated with teaching and learning. “What we do here is also a sheer joy…Time on a college campus is a gift. Let us not forget to celebrate.”

In addition to the past presidents, students, alumni, faculty and staff, delegates representing 65 universities and colleges, and five learned societies and educational organizations, were present for Saturday’s event.

The full text of Dudley’s remarks can be found online: https://www.wlu.edu/presidents-office/speeches/inauguration-address

A video of the inauguration can be found at: https://livestream.com/wlu/dudley-inauguration